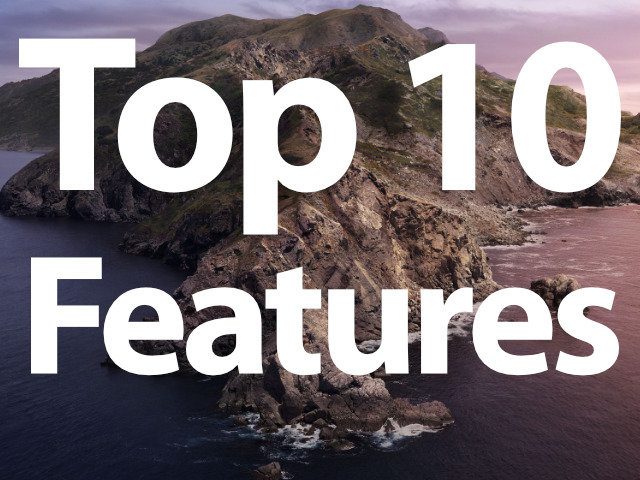 The Mac operating system macOS 10.15 Catalina was rolled out in September 2019. Right at the beginning the actually good innovations and improvements of the system were replaced by numerous small and medium problems overshadowed. Therefore, here is a top 10 of features and innovations that should be highlighted with regard to macOS Catalina. Perhaps that is also a good preparation for the one that is taking place this month Apple WWDC 2020. I have an overview of older Mac OS, OS X and macOS versions as well as their new features on the Mac summarized here.

Due to initial problems, many new and great functions of macOS 10.15 Catalina were lost. Here you will find a top 10 of the innovations and improvements in the Mac operating system 2019/2020.

1 - iPad as a wireless external display via "Sidecar"

An impressive innovation that was rumored through the trade press even before the public introduction was the “sidecar”. Apple used it to respond directly to various apps such as Luna Displaywhose USP was previously that they made it possible to use the iPad as the Mac's external display. Thanks to Apple's proprietary solution, third-party apps are now obsolete and the whole thing also works more smoothly and stably. You can find out which Mac models are compatible with macOS 10.15 and which iPad models are compatible with iPadOS 13 for Sidecar look here.

And speaking of the parallel use of image content: Safari has also been able to boast a new function since the Catalina operating system for the Mac. If you play a video on YouTube, for example, you will see a loudspeaker symbol in the title bar of the corresponding tab or in the address bar next to the URL. If you hold a mouse click on it, a small menu will appear. Select “Start picture in picture” and the video will be placed in a corner of the screen over the Safari browser. You can now continue surfing, switch between tabs, etc. and the video always remains in the foreground. It can be moved in all four corners.

3 - Sign documents with the iPhone (in the preview app)

This is a function that is not so easy to discover, but it is super practical for the paper-saving or paperless office. If you want to sign documents, their scans or the like, just open them in the preview app. Then click in their toolbar on the pencil symbol (option "Show toolbar") and then on the sign symbol. There you have the choice between trackpad, camera and iPhone (depending on the Mac, iMac and MacBook model). I find the signature that can be placed on the iPhone display to be the most convenient and accurate - it is also transmitted in real time.

With macOS 10.15 Catalina, the “Screen Time” function, which is already known from the iPhone and iPad, came to the Apple Mac. Instructions for setting up the feature you can find here. With the feature in the current Mac operating system, it is not only possible to monitor your own computer and app usage, but also to set limits and time-outs. In addition, times can be set when you do not want to be disturbed by notifications, calls or the like. The settings from the Mac can be easily transferred to other Apple devices such as the iPhone or iPad via iCloud.

Under -Menu -> System settings ... -> Accessibility you can find the function in the left bar under "Motor Skills" Voice control. If you activate it, you can control the Mac with certain commands, display numbers for buttons and symbols so that you can control them by voice, and so on. Anyone who has already worked with Microsoft Windows has probably known the whole thing for a long time - surprisingly, voice control is something new for the Mac. You can set external as well as internal microphones of the computer as input devices (if available). Apple shows further details and basic voice commands in the support document HT1210539 .

Not quite as groundbreaking, but still useful is the automatic dark mode under Catalina. Although macOS 10.14 Mojave already brought dark mode for the system and apps in 2018, it was expanded again in 2019 and adapted to the current time of day or sunshine. The change between light and dark display can now happen automatically. You can activate the automatic via -Menu -> System settings ... -> General, and then at the top by selecting "Automatic" in the line appearance.

Apple has not only given up iTunes with Catalina (see below), but has also fundamentally revised other apps and functions. This also resulted in the new “Where is?” App in 2019. It combines the display of friends and family with finding your own devices. Before, these two search options were separated from each other in separate solutions. But that's not the best news yet. Because previously you were in a fix when the lost Mac was switched off. Now it also sends a Bluetooth signal from time to time, which is picked up by other Apple devices and made available for searching.

8 - Improvements in the Notes app

The search function in the Notes app has been improved a bit. The new gallery display also enables better orientation when using many different notes. Because in it all notes are listed with thumbnails. So if you are an optical type, you will find your way around here particularly well. In addition, shared folders can be used for notes that can be shared with others via the same. Last but not least, the new checklist function should be named, with which check and to-do lists can be created. Larger tasks can thus be broken down into smaller subtasks.

9 - The Reminders app just got a little smarter

As you can see, there is a whole lot of great new features in macOS Catalina. But these go a little further; for example with regard to the reminders app. Here, data is also taken from a running text, for example to make suggestions for calendar entries. In addition to the date, the time and place for the appointment can also be recognized. Smart lists can also be created.

10 - The breakdown of iTunes into Finder, Music, Podcasts, etc.

As you can see, I've saved the big blow for last. Because the dismantling of the iTunes app, which is very much loved by many, is probably still a controversial topic. Where one group advocates the breakdown into different apps such as music, Apple TV, podcasts and Co. and also approves of iPhone management via the Finder, the other group opposes it. Of course you have got used to iTunes over the years. But that basically applies to all kinds of apps, features and organizational options. Those who have not yet got used to the new tools will certainly do so in the future: D