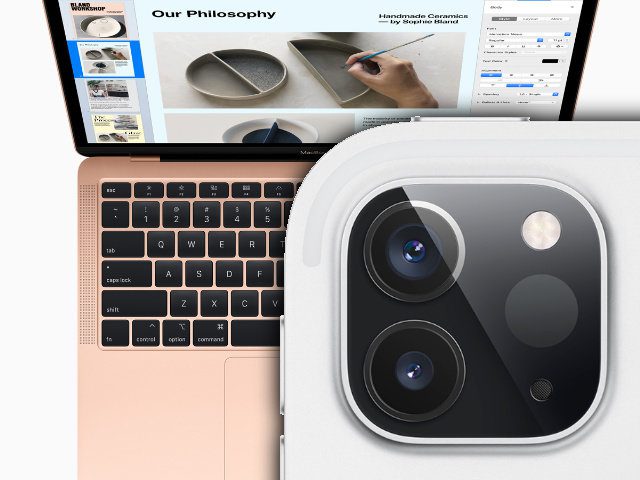 Apple yesterday introduced a new MacBook Air and a new iPad Pro with LiDAR scanner and trackpad support. That almost got lost today between the other reports and news. However, I have now looked at the press releases of the technology manufacturer and extracted the most important information for you. Here you will find the summary of the MacBook Air Early 2020 and iPad Pro Early 2020. Oh yes, the rumors about the “Magic Keyboard” with trackpad for the iPad Pro have also come true;)

Apple presented the new MacBook Air and the new iPad Pro yesterday without a keynote, but via press releases. For the latter, there is now a keyboard with a trackpad.

"The most popular Mac now offers up to 2x faster performance, the new Magic Keyboard and twice as much storage space" is it [called from Cupertino to the new version of the Apple MacBook Air. The starting price is 1.199 euros. Depending on the equipment selected, there is a CPU that is up to twice as fast and the graphics performance can be increased by up to 80 percent.

The Retina display measures 13 inches, the Touch ID can be used, and "the new Magic Keyboard" (used for the first time on the 16 "MacBook Pro) was installed. The storage space is now at least 256 GB and a maximum of 2 TB. If you choose the most extensive version (i7 CPU with up to 3,8 GHz, 16 GB RAM, 2 TB memory) the laptop costs a proud 2.579 euros.

The new MacBook Pro 2020 with Magic Keyboard has a 13-inch display, up to 2 TB of storage and more performance.

The new iPad Pro comes with an A12Z Bionic Chip and doesn't really surprise with the double camera on the back. It became too often Rumors about cameras and environmental scanners warmed up in recent months. In addition to the additional ultra-wide-angle camera and the studio-quality microphones, the LiDAR scanner (Light Detection And Ranging) is not completely uninteresting.

In connection with the high performance of the tablet and the Liquid Retina Display (11 ″ or 12,9 ″) it is now an even better tool for AR applications and games. As of iPadOS 13.4, the new iPad Pro also comes with trackpad support, so that the new Magic Keyboard including trackpad can be used, for example. The full press release you can find here.

The new iPad Pro Early 2020 from Apple has an A12Z Bionic Chip, a double camera and a LiDAR scanner for the detection of the environment. AR applications and AR developments are now better possible.