What does 4K resolution mean and are Ultra High Definition, QFH & UHD the same thing? 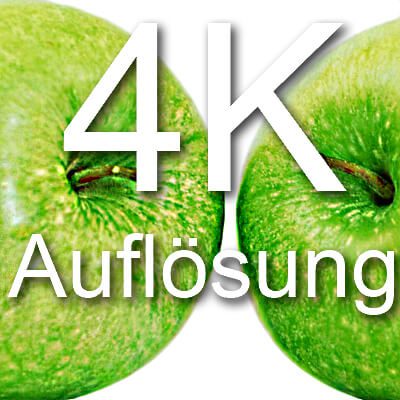 4K resolution - what does that mean and how many pixels are that actually? Do you really need 4K TVs and 4K monitors for Mac and PC? What is the difference between 4K and Full HD, what resolutions are meant by that? In this post I would like to answer these questions for you and shed some light on the darkness. This is how you start buying electronics with the right knowledge;)

With the 4K resolution, a distinction is made between two different specifications or sizes. The one 4K size gave the abbreviation (4 kilos, so four thousand) its name; and the other is the more commonly used actual resolution in videos, televisions, blu-rays, and so on. In order not to confuse further, here is a breakdown:

What is 4K2K and is there a difference to 4K?

No, the 4K2K resolution is nothing different than the 4K UHD standard. The longer term also means the 4K format. This only describes the two thousands, i.e. 4 in width and 2 in height: 4K2K. Because the two resolutions shown above have roughly rounded 4.000 x 2.000 pixels - 4K2K ... And here, for fun, all the terms that all mean the same thing:

A little geek fact on the side: Uncoded 4K UHD needs a transfer rate of at least 10,2 GBit / s, while 4K encoded to mp4 is adapted for 20 MBit / s on YouTube and 25 MBit / s on Netflix. Here is a graphic that shows the currently used resolutions as well as their width and height - click on it to enlarge it: 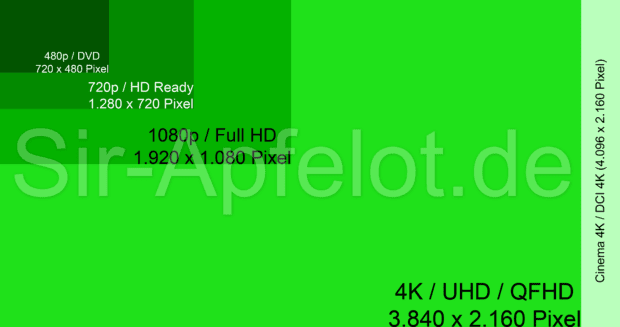 On this picture you can see the two resolutions Full HD (scaled to 4K) and 4K UHD. Click on the picture to see it in all its glory. The apples in the background are the same, so you have a direct comparison. You can see that with more resolution there is more detail, sharper edges and such a clear picture. You can also see this in the lettering when it is scaled from Full HD to 4K (left half of the image): 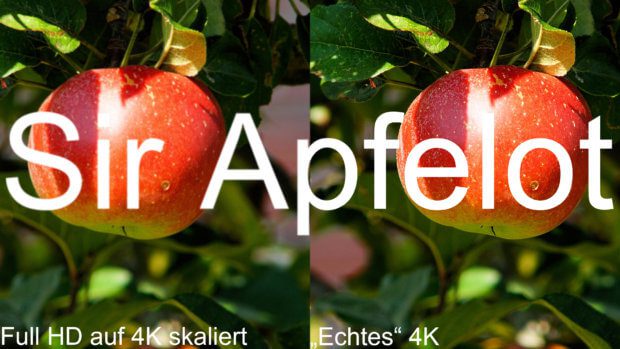 Full HD upscaled to 4K does not look as good as material originally recorded in 4K.

UHD (Ultra High Definition) has long since ceased to be the measure of all things when it comes to maximum resolution with high pixel density. Therefore this size has meanwhile been downgraded to UHD-1. UHD-2 already has a resolution of 7.680 x 4.320 pixels. Right, that's 8K, which is twice as much as 4K, and four times as much as Full HD. The pixel density of 8K is 16 times higher than that of Full HD, so details are drawn as finely as never before. The required data rate for the transmission of 8K raw data is 24 GBit / s.

Why do you need a 4K TV or monitor?

With more resolution and a wider color spectrum / gamut (HDR video), images, videos, video games and similar content can be displayed much sharper, more precisely and thus more faithfully and realistically. Especially those who work in video editing or image processing can benefit from this. With regard to video or console games, the displayed content is becoming more and more realistic. Gone are the days of angular polygons and blurred edges that look like copied. Video games should look like filming - and with 4K, 5K and 8K they can do it too. An article about 4K televisions that you can also use as monitors, you can find here. Information about the LG UltraFine 5K display for the Mac / MacBook can be found here: Click .

On the comparison graphic above you can already see the initial DVD resolution, which doesn't even come close to the 720p / i standard, let alone Full HD. For over a decade, HD and Full HD DVDs have also been in vogue. So if you watch DVDs, a full HD television or monitor will do. In the case of Blu-Rays, there is still a need to differentiate. Because there are some with Full HD (1080p / i) and some with UHD or UHD-1 or 4K. You can find it here in the blog also an article.

The other way around, too, becomes a shoe

It is not just that better and higher resolution televisions are required because the output medium is becoming sharper. Film and television productions, on the other hand, are increasingly relying on 4K UHD, 8K UHD or similar resolutions in order to be able to supply the ever-growing TV sets with sharp images at all. Because the television takes up half the wall, then an upscaled Full HD looks like it was shot with a potato ...

No matter how you twist and turn it, in the end everything remains 4K, which sounds roughly like UHD. I hope I have not confused you further with this guide, but has been able to provide clarity. If you have any questions, just ask them under this post as a comment - I'll get back to you!