Apple's MagSafe on the iPhone 12 Pro - charging power measured once ...

Yesterday came mine MagSafe charging puck on and I thought I would measure what is now "phase". There have been so many rumors in the last few weeks that you have to use the special Apple power supply to get the maximum charging power or that you have to have a power supply with at least 20 watts. All half-knowledge that was thrown into the world and unsettled many iPhone users. It is clearly time to get a few facts on the table. 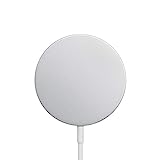 I used the following devices for my measurements:

The power supplies that I tried out were as follows:

No MagSafe without USB Power Delivery

One thing is definitely clear: if the power supply isn't a USB Power Delivery the MageSafe charger does not work, because the required operating voltage of the Apple Puck is 9 volts instead of the 5 volts that are usually supplied at the USB A port.

However, I did not get my hands on a USB-C power supply that USB PD would not have supported. Even the old Anker PowerPort I power supply unit already works with this standard.

Aukey kindly described what USB Power Delivery is in his operating instructions for the power supply unit.

The results were quite interesting. On the one hand, the 15 watts of power that are always advertised are not practical values. In principle, however, this is the case for all information provided by all manufacturers. On the other hand, there are a few other exciting insights into the development of heat and the required power supplies, which you can read below.

First, maybe a word about standby power consumption. Of course, this depends on the power supply, but most modern power supplies have virtually no measurable consumption without load. If you hang the MagSafe charging puck on such a power supply unit and have no iPhone connected, it consumes approx. 0,9 watts. This corresponds to around 2,30 euros in electricity costs per year.

The power consumption of the MagSafe charging adapter in standby - without the iPhone attached - is approx. 0,9 watts. Measured with the Voltcraft Energy Logger 4000 (Photos: Sir Apfelot).

If I charge my iPhone 12 Pro (battery level below 50%) with the MagSafe adapter on the MacBook Pro power supply (guaranteed enough power), then the iPhone - according to the Coconut Battery - only receives a maximum of 10 watts. I was only able to measure a higher value of approx. 12,5 watts for a short time. Even the power consumption that I have in parallel with one USB-C multimeter measured, was a maximum of 15 watts (for a few seconds) - most of the time, however, rather 8 to 9 watts.

Warming up of the iPhone slows down the charging speed

It was also interesting for me that the iPhone was initially charged with around 12 watts, but this value dropped to around 5 watts after 10 to 7 minutes. Coconut Battery also shows me the temperature of the iPhone and this is apparently decisive when charging. As soon as the temperature reaches approx. 36 ° C, the charging power is reduced to 7 to 8 watts. After that, however, the iPhone 12 Pro will continue to warm up slowly until it reaches approx. 37 ° C. This was the case after a good 10 minutes on the MagSafe and the charging power immediately fell to approx. 4,3 watts.

If you put the iPhone in the fridge for 5 minutes to cool down and then connect it to the MagSafe charger again, the charging power jumps back to the initial 12 watts and the game starts all over again.

Specifically, this means that the heat generated during wireless charging prevents fast charging. So, even if the technology itself could transmit more current, the power is reduced to protect the battery and you only charge with a maximum of 10 watts after 5 minutes at the latest.

Is the Apple charger crucial? No!

Many people still claim that you need a special Apple power supply to get maximum performance when charging. To test this rumor, I compared the charging power of some of my USB-C power adapters with the power that flows into the iPhone 12 Pro of the original MacBook Pro power adapter from Apple.

The bottom line was that there were no changes here. All power packs used carried the same amount of energy into the iPhone 12 Pro and were able to charge the iPhone just as quickly as the Apple power pack.

Even the 20 watt power supply "Anker PowerPort III Nano" could keep up here. The whole thing is not surprising, since the power consumption of the MageSafe charging puck only went up to a maximum of 13 or 15 watts. In principle, a 15 watt power supply would be enough.

If you want the maximum charging power, you should make sure that the iPhone stays cool. A shell is rather counterproductive here (photos: Sir Apfelot).

MagSafe and sleeves - usually not a good combination

Much more serious than the power supply, however, is the drop in charging power due to the heat development. Even if you use the best charger: If you use a case on the iPhone, it cannot properly dissipate the heat generated when charging via MagSafe and it becomes too warm. The charging electronics in the iPhone then reduce the charging power to less than 5 watts, so that you could also charge directly with a perfectly normal Qi charger.

As a test, I also used the iPhone in my down jacket with an app that requires a lot of CPU. When I reached 44 ° C, the iPhone was freed and hung directly on the MagSafe charger. The result: The charging power was only 1,92 watts. Heat and charging speed are therefore in a direct relationship to one another - so far not surprising, but a confirmation of the charging behavior.

Counter test: MagSafe store without a cover - what happens?

To see how the charging speed behaves when you put the bare iPhone without a cover on the MagSafe charging adapter, I let it cool down again first. At almost room temperature it was connected to the MagSafe Puck and I kept an eye on the time and temperature.

And no, the iPhone was still below 30% after 50 minutes and thus in an area where it would charge faster if you hooked it up to the cable. I did this as a test and measured it:

Now you might be surprised that the iPhone still charges with over 10 watts despite the high temperature. I assume that a special temperature sensor is built into the MagSafe Element here. During wireless charging, this becomes warmer than the sensor that CoconutBattery queries, and the MagSafe sensor then regulates the charging power down more.

For comparison: Charge the iPhone 12 Pro with a USB-C cable

To see how quickly you can charge the iPhone 12 Pro with USB Power Delivery and the appropriate USB-C to Lightning cable, I also did this test.

I was able to measure the following:

As you can easily see, the iPhone charges with the right one USB-C to Lightning cable almost twice as fast if you look over the higher charging current of MagSafe in the first few minutes.

If the iPhone recognizes the MagSafe charging puck, you can even see a nice animation - much better than when you charge the iPhone with the cable. : D

My conclusion on the MagSafe charging performance

Without a doubt, for many MagSafe users, it's not just about loading speed. The convenience and the new mounting options that MagSafe offers also play a major role in the purchase.

In this article I just wanted to check out the rumors and throw a few practical values ​​into the discussion that, in my opinion, have been missing so far. Most of them should have realized beforehand that the value of 15 watts advertised by Apple will not be achieved in practice. However, even under the best conditions, charging via MagSafe will be slower after a short time than charging with the old 5-watt power supply and the USB-A charging cable, which should surprise even some experts.

How efficient MagSafe is is also hotly debated, but I'd like to treat this topic with a separate article. If you want to read this too, wear yourself in my weekly newsletter one or install yourself my free Sir Apfelot app.