So far, my daughter has wandered the world without a smartphone. With the entry into the 5th grade, however, she is so far advanced in our view that she needs a cell phone to communicate with classmates. If you don't have a WhatsApp smartphone at that age, you are already relatively marginalized, as the kids talk a lot via WhatsApp groups and make appointments via messages. 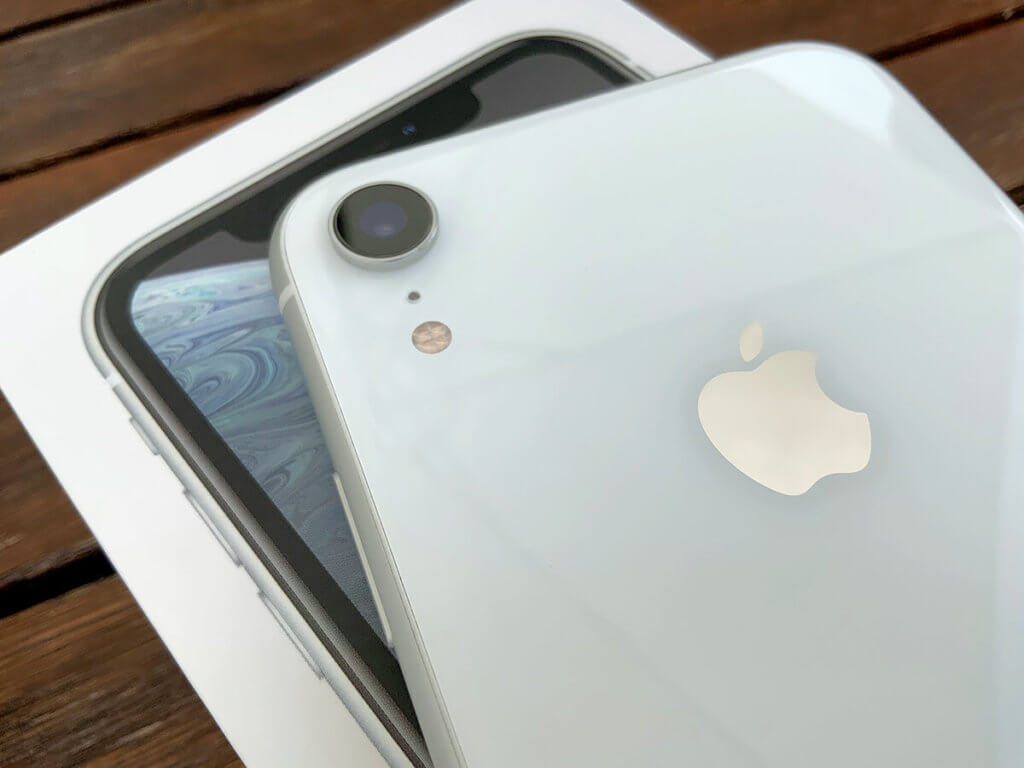 The iPhone Xr has become the smartphone of choice: Although it only has one lens, it can still be used in portrait mode.

Why an iPhone Xr?

That my daughter will get an iPhone is pretty obvious if Papa Sir Apfelot is dead. The only question was which model would be considered. Basically, I found the new one iPhone SE 2020 quite interesting, as it is reasonably inexpensive and also has a handy size for a child.

Compared to the Xr, it even has the faster processor (A13 instead of A12) and the new generation of Smart HDR photo function. But unfortunately in the week in which I wanted to order it, it was no longer used at a dealer. I will explain later why I really wanted to buy it used from a reputable dealer.

In any case, the iPhone Xr was the alternative and due to the larger screen and the support of FaceID, which the iPhone SE 2 lacks, it is not even a bad alternative. My daughter was delighted with the large display as she likes to edit photos. That would have been pretty tricky on the iPhone SE. 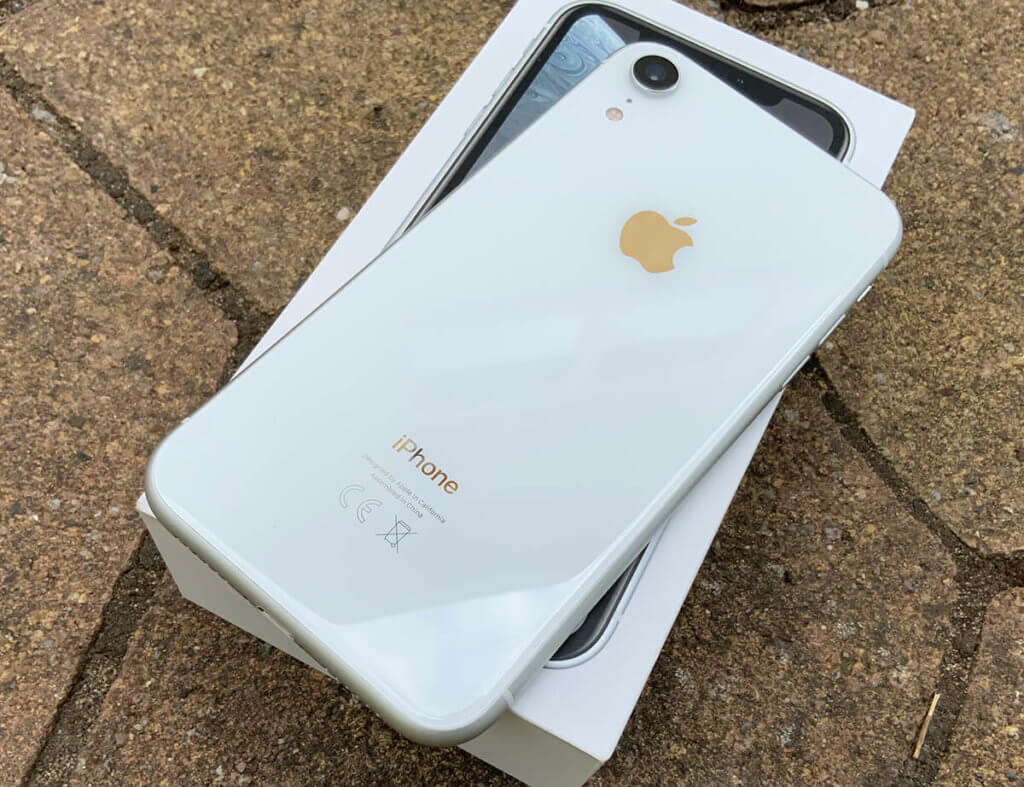 The iPhone Xr was my second choice because I would have preferred to buy the iPhone SE 2020, but it was sold out when I wanted to do my shopping.

Looking for an Apple smartphone with a good camera

Many will now say:

What about the iPhone 6 or the old iPhone SE? That's enough if you just want to send WhatsApp messages.

Yes, that is correct so far, but on the one hand the old iPhones will not receive any new iOS versions anytime soon and on the other hand my daughter has been enjoying taking photos for years. I didn't want to give her an old pickle that only takes blurry photos, but an iPhone model that also delivers decent photos - just to further support her hobby.

So that my daughter got an iPhone with a good camera, she ultimately contributed some money from her money box herself. 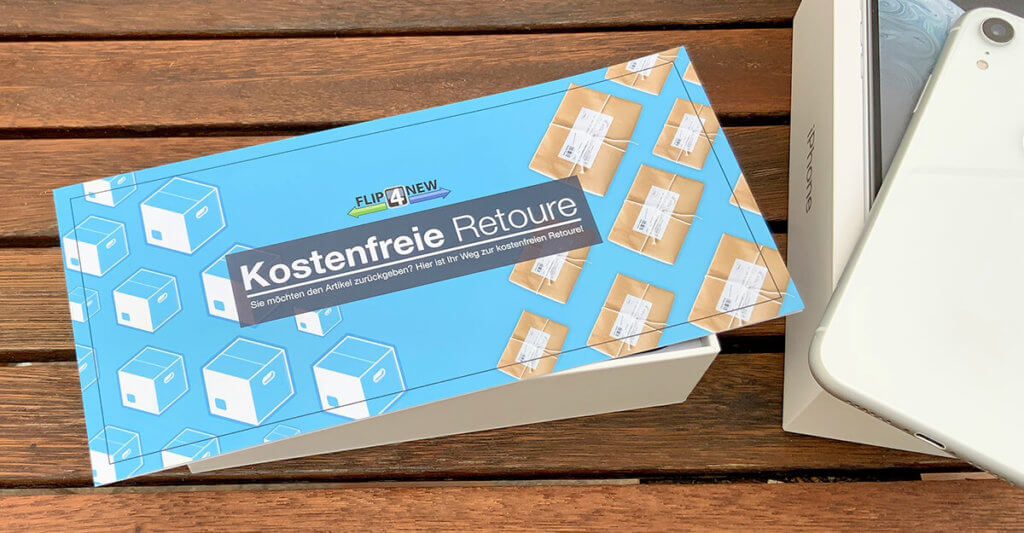 If you don't like it, you can return the iPhone to Flip4 Shop or Flip4New within 30 days - free of charge (Photos: Sir Apfelot).

Why I only buy used iPhones from dealers ...

The decision for a used iPhone was of course made for reasons of cost. If you want to buy the iPhone Xr with 64 GB currently new from Apple, it costs around 680 EUR. I look at the same model Flip4Shop, I am at around 425 EUR - a significant price reduction of over 250 EUR, which is actually not associated with any disadvantages. You can get similarly good prices (usually a little bit more expensive) from the dealer rebuy, which also has used Apple products on offer.

In my opinion, the two used dealers have the following advantages: 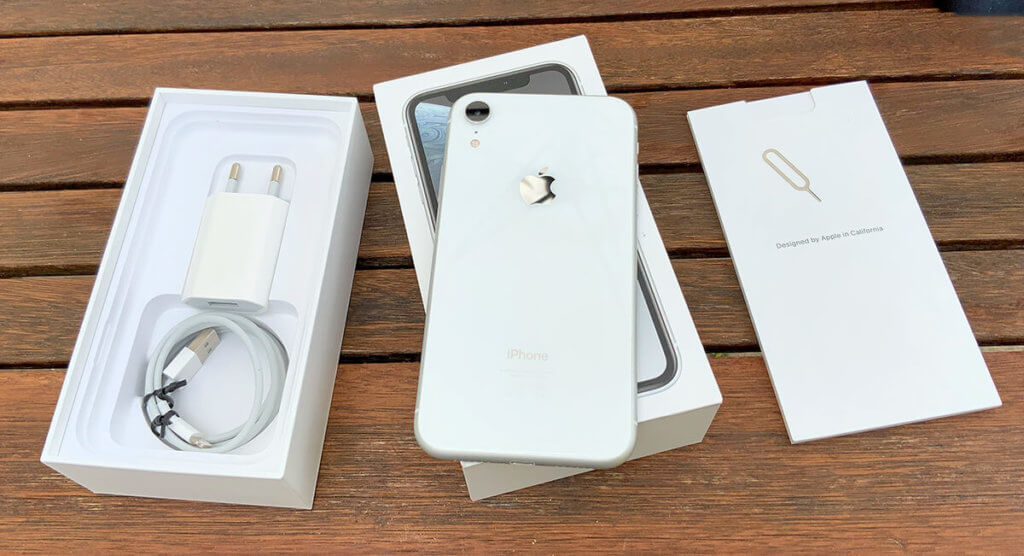 The used iPhone is supplied with a charging plug, charging cable, but without headphones for reasons of hygiene (Photos: Sir Apfelot) -.

Beware of fraud in private sales

As a matter of principle, I do not buy used iPhones, iPads or Macs from private people, as there are so many fraudsters around. For that reason just come for me rebuy or Flip4Shop into consideration, as I have already tried these two dealers and am satisfied. You can find a little idea of ​​Rebuy including a testimonial here in an older blog post.

When I look for Apple devices on eBay classifieds every now and then, I quickly notice what the scammers are doing and how to spot the dubious offers:

My advice: Stay away from private sellers and prefer to spend a little more to buy the device from a reputable dealer.

And if you really want to buy something from a private provider, have the serial number of the device sent to you and give it to you on the service Chipmunk.nl. Then you can see whether the provider's data actually match that of the device. Or whether the serial number isn't already wrong. Also the app "MacTracker"is helpful here for information about specific Mac models. 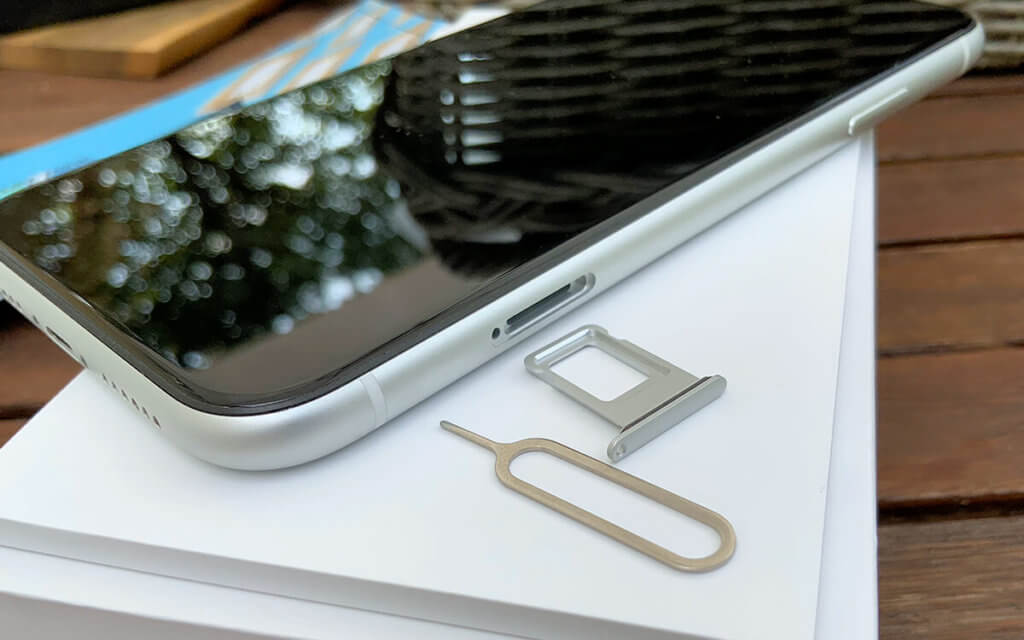 The SIM card slot and the opening tool are undamaged and without any signs of use. All accessories (except for headphones) can be found in the original packaging, which is also included with the iPhone.

Condition of my used iPhone Xr

But back to my purchase. I had an iPhone Xr selected at Flip4Shop and then bought it in their eBay shop. A little tip: The prices in Flip4Shop's eBay shop are always a bit cheaper than on their own shop flip4shop.de.

The reported condition of the device was "optically used". You can find this note in the item description:

The device is in a used condition. Visible scratches may appear on the display and / or the housing. Likewise, the device can occasionally have slight notches and / or color abrasions on the housing. These are recognizable during normal use, but not annoying. 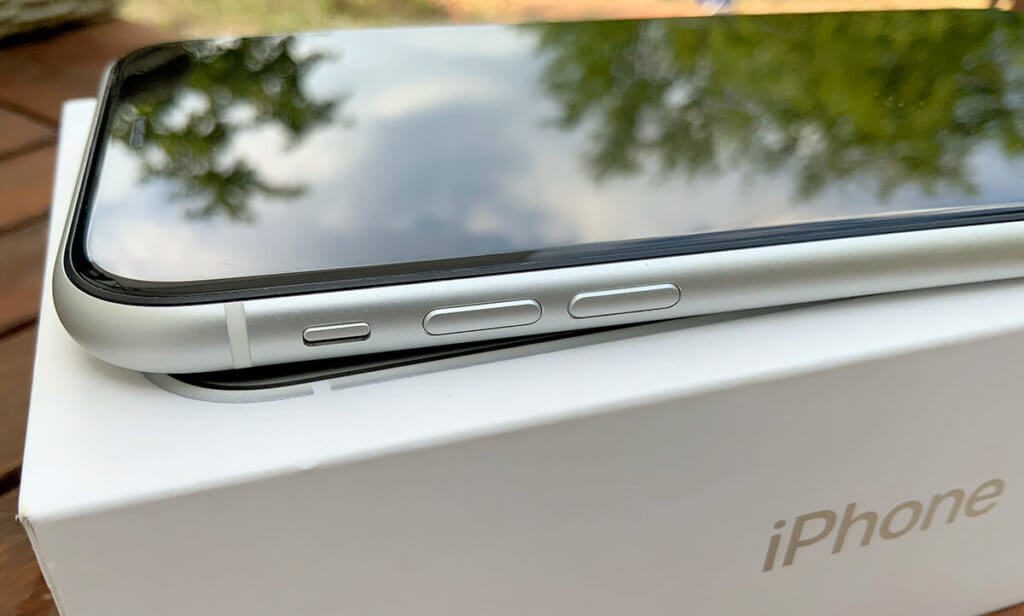 Here you can see the volume buttons and the mute switch. You would see scratches on the display quite well in the reflection - but there are none.

Based on the product description, I was mentally prepared to receive an iPhone with slight scratches on the display and case. When the package arrived and I unpacked the iPhone, I was very surprised: The iPhone Xr looked like it was peeled from an egg. The only thing missing was the typical Apple film on the device and I would have thought it came straight from the factory.

In short: not the smallest scratch was visible. The case wasn't worn anywhere either, and I couldn't even see a bit of lint in the speaker and charging openings. You can see a bit of dust in my photos, but it always comes out particularly strongly in such close-ups. Nothing could be seen with the naked eye. Each of my iPhones looked significantly worse after a week of use. 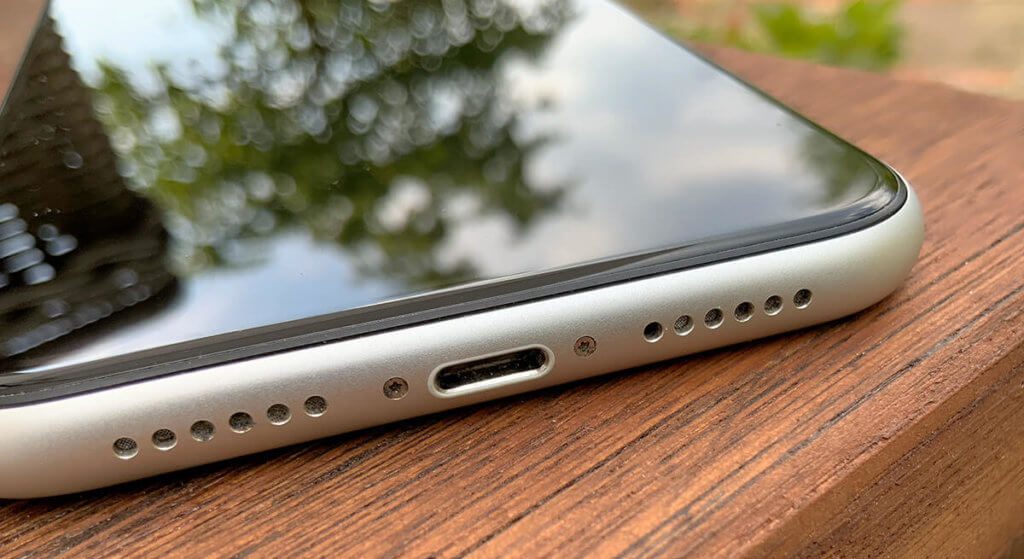 A bit of dust can only be found in the loudspeaker openings when magnified (photos: Sir Apfelot).

Bad for entrepreneurs: no reported VAT

For the self-employed and companies, the thing with the used dealers still has a disadvantage: No VAT is shown on the invoice from Flip4Shop and Rebuy, so unfortunately you cannot claim this against the tax. For private purchases - as in my case - this is irrelevant, but those who buy goods for their business should think about the missing VAT ID.

Since it pointed out to me in the comments that you can get iPhones with bad batteries with such used devices, I checked the battery status of my iPhone Xr. This is given as 97% and you can see the indication that the "high performance capability" is still given.

This relates to special situations, for example when the temperatures are below zero, you are jogging with a GPS tracking app, stream music on the side and then want to quickly shoot a video. It should be clear that this places high demands on the battery - and that is exactly what is still the case if it is still "high-performance". A weak battery here will cause the iPhone to shut down to protect the battery. We know this from the old iPhone 6 and iPhone 7 models, some of which had defective batteries. 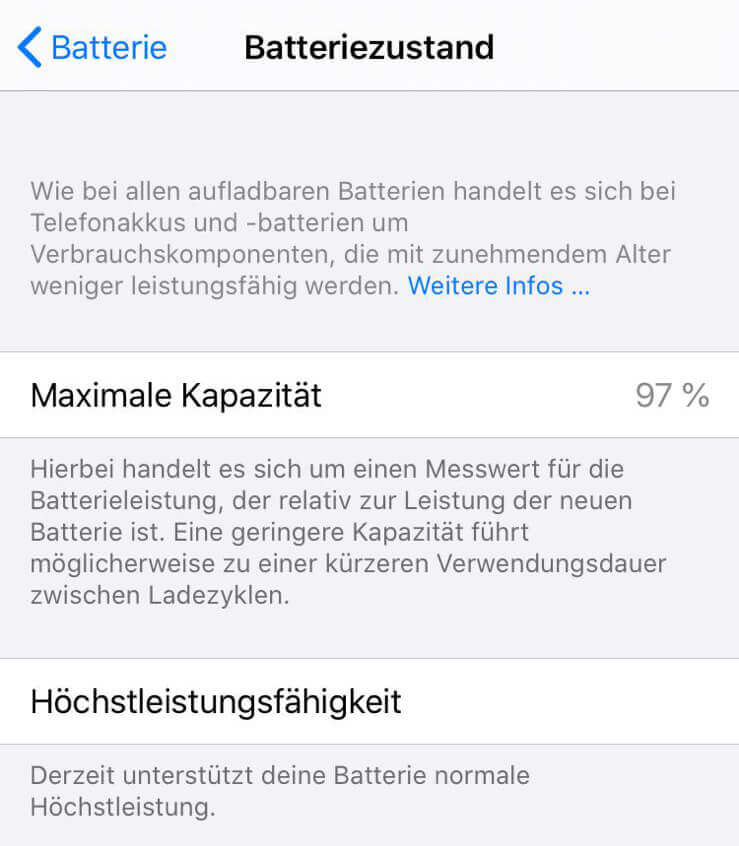 Here you can see the screenshots of the battery status. 97% are perfectly fine and show that the battery is still quite fresh. I guess about 4-6 months of use.

As a test, I checked what the battery looks like on my almost 2-year-old iPhone Xs, which is really almost empty once a day. This still has 1% battery status and also supports "high performance". So from my point of view you don't have to worry about the batteries anymore. Electronics protect them better and better and they also last longer.

Positive experience with buying a used product through Flip4Shop

The bottom line is that I can say that I - just like I did before at rebuy - I am very positively surprised by the used iPhone from Flip4Shop. If there was a new “used” model right at the market launch, I would never buy a brand-new one again.

The 12 month warranty at Flip4Shop and the option of exchanging the device within 30 days are two further points that show me that you don't do much wrong here.

If you need a new iPhone or iPad for your kids or you, I can Flip4Shop and also rebuy Highly recommend. There are other used dealers, but I haven't had any experience with buying used ones.

If you are unsure about which iPhone model to choose, I will be happy to help you. Just leave a comment with your requirements or specifications.