Fix blue snow photos in the Photos app on the Mac

The last few weeks we had a pretty picture-perfect winter here. Of course, a number of photos were taken again, because if you were still walking around in the mud a few days ago, you can hardly get enough of the white splendor. In addition, it looks so temptingly good in the forest and in the fields when the sun shines on the snow that you simply snap a lot more often than if you just walk around in the cloudy slush.

Blue snow in photos - also with the iPhone 12 Pro Max

In any case, I was busy taking photos again with the iPhone 12 Pro Max and, surprisingly, the white balance and the color correction are not always correct even with the Pro model from Apple, so that one or the other picture with bluish snow ended up in the photo library. With my old iPhones, some of the pictures even looked as if they had taken the onset of winter in Schlumpfhausen.

I usually edit my blog photos in Adobe Photoshop, but these types of corrections can also be made very well in Apple's Photos app. I'll show you how it works here. 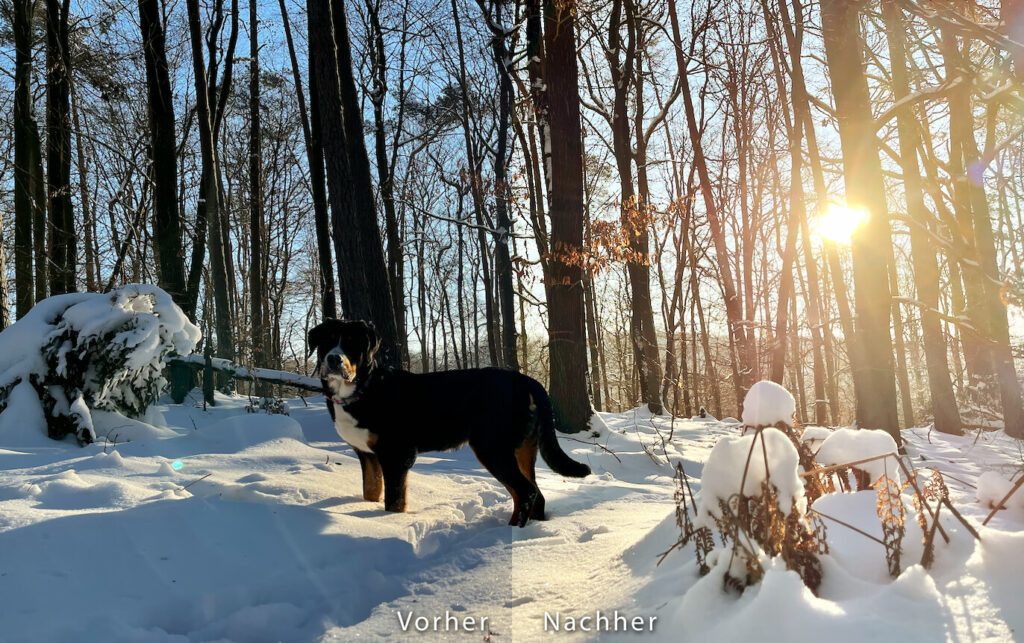 On the left you can see the photo as it fell out of the iPhone 12 Pro Max and on the right the result after a very short edit (photos: Sir Apfelot).

White balance in the Photos app on the Mac

As an example image I have chosen a photo of our dog in the backlight. A black dog in front of the sun is a somewhat unfortunate subject if you would like to see a little more drawing of the dog, but for my purposes it is sufficient.

When we have selected the relevant image, we click on "Edit" in the top bar of the Photos app. Now we can see the photo in high resolution on the left and have some adjustment options on the right. 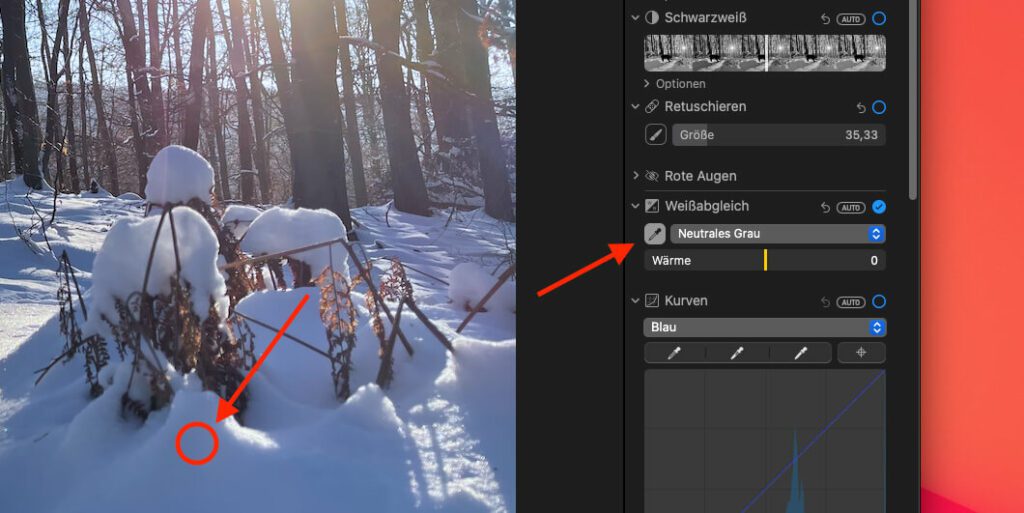 You can usually get very useful results with the white balance. In the current case, however, I continued with the "curves".

As a rule, the first step for me is that I click the pipette in the “White balance” area for “Neutral gray”. Now you go to an area in the photo that is somewhat darkened in reality, but is actually white if it had been completely illuminated. For indoor photos, for example, this would be a piece of white paper or white packaging. If you have white wallpaper in the photo, you can click on it with the pipette.

In my photo, of course, the snow is white and offers the opportunity to use the pipette. I chose a shady area in the foreground that was not illuminated by the morning sun so that the direct warm light from the sun does not affect the result.

Color correction can also be made with the middle pipette under "Curves". In this case, I liked the result better than what I achieved with "white balance".

In this way you get a pretty useful result. If you want to experiment a little further, you can also select the middle pipette in the "Curves" area and thus select a middle, neutral gray tone. That can also be the snow in the shade. In my case, I liked the result with the “curve pipette” better, so I used this as a starting point to continue working on the photo.

The "Light" slider can be used to increase the brightness in the photo without burning out the areas. I then did the fine-tuning with the "Exposure" slider, which should be used gently.

Brightening with "Light" and "Exposure"

Overall, the photo was still a bit too dark for me. This problem can be changed with the top slider in the sidebar, which is simply called "Light" and controls exactly this. If you move the slider further to the right, the whole picture is brightened - but with a small algorithm behind it that doesn't just increase the exposure, but does significantly more. When you move the "light" control, you can see how all the controls underneath also move. This is like the Photos app's attempt to get more light into the picture without losing details or "burning out" bright areas.

Since the result was still not bright enough for me (snow has to be light!), I subsequently dragged the "Exposure" slider to the right again. I think the result is a very nice winter photo with a light morning mood due to the warm incidence of light in the foreground.

At the end you can see the before and after photo again in comparison. Sure, a photo professional would have gotten more out of it, but I was only interested in correcting the blue color in the snow. 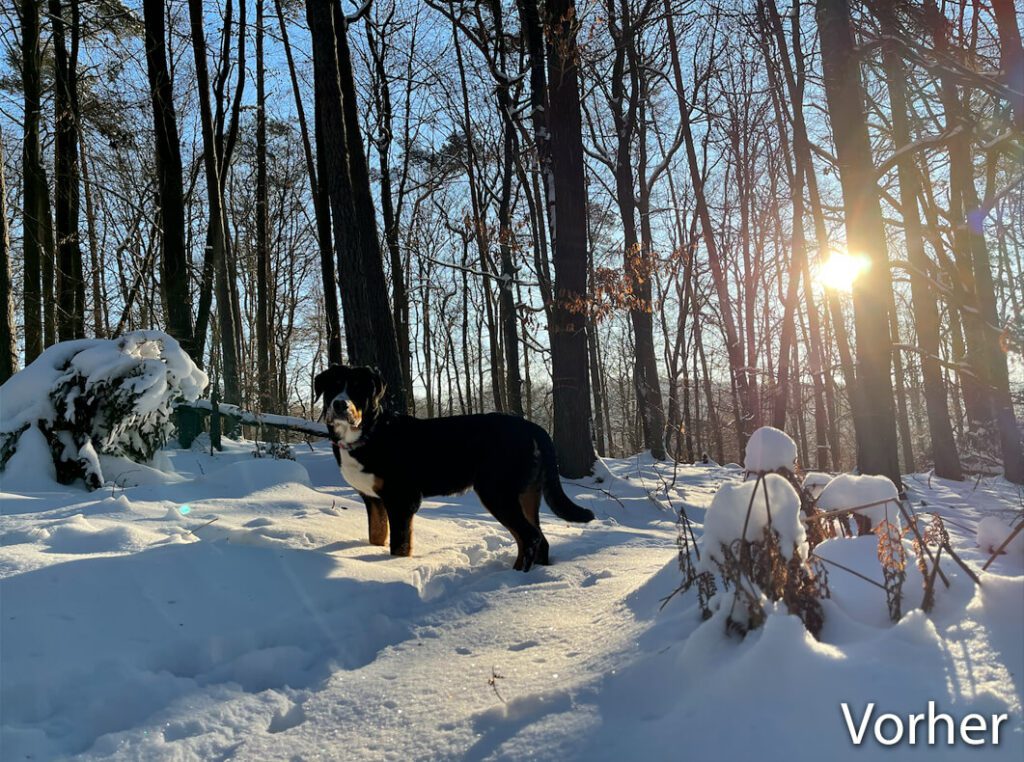 Our "Henry" in the snow - here a little too blue and too dark. But still a dear wuffi. ;-) 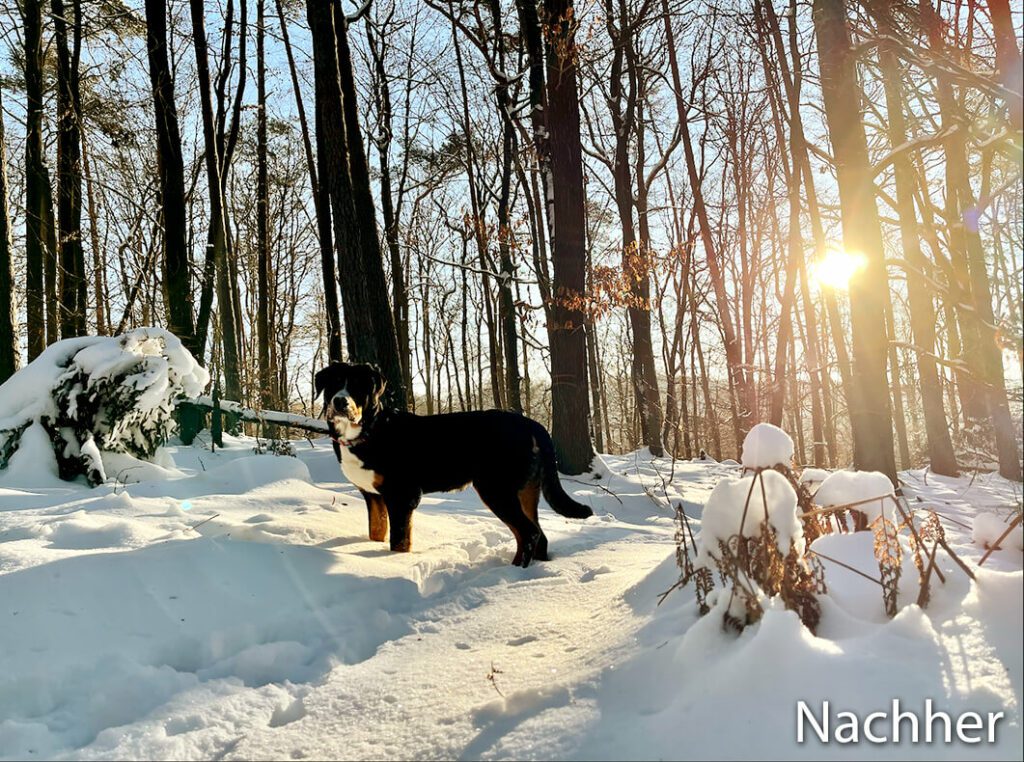 After the brisk editing and color correction, it all looks a bit friendlier and warmer. And I think Henry likes the photo better that way ... he just growled in my ear ... ;-)