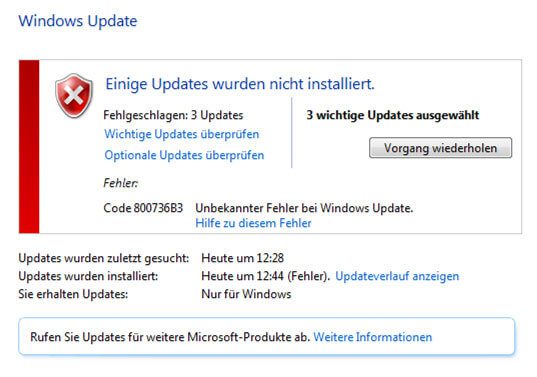 Yes, yes, now I can hear the first prophecies of doom: "Sir Apfelot's Apple Blog is already dealing with Windows problems! Where is this going?!?" ... but the situation is serious and there are certainly other Macs too -Users with the problem: Recently my Windows 7, which I am running under [Parallels Desktop on Mac-> parallels-desktop], says that it cannot install an important system update. As is typical for Windows, the message is extremely helpful: "Error: Code 800736B3 - Unknown error during Windows Update". You can only say: Thanks for the info! :)

The Windows error with the code 800736B3 can be fixed by installing a Microsoft utility program.

Desperate pressing of the "repeat process" button was unfortunately unsuccessful, as always, and so research was announced again. After some torture with Google, I found that there is a tool from Microsoft that "prepares" the operating system for the update. You should install this and then try again to carry out the updates via the Windows control panel.

The tool is called "System Update Preparation Tool for Windows 7 for x64-based Systems (KB947821) [May 2014]" and can be downloaded from this link. For people with a 32-bit system, of course, you have to choose the appropriate variant before downloading. With my MacBook Pro Retina, I can already use the 64-bit version.

For most people it works after installing the software - unfortunately nothing more happened to me on the progress bar towards the end, so I had to cancel. A start under "Safe Mode" and also under "Safe Mode with Networking" did not help either, since the tool does not work in safe mode.

The last attempt to get the updates with the "Microsoft Fix it" tool Resetting and reinstalling did not improve the situation: Neither the hotfix for error 800736B3 nor the three Windows updates could be installed.

Installation after a clean restart

One last attempt was to do a "clean restart" of Windows. Services that are not directly related to Windows are deactivated. In this way you do not start in safe mode, but also not with drivers and similar ballast that could prevent installation due to conflicts. I kept an eye on my virus program "Avira", which could possibly prevent an installation. The instructions for a "clean restart" under Windows 7 can be found here.

Unfortunately, this action did not solve my problem either. I'm slowly running out of ideas as to what else I could try.

I suppose at some point there will be a reinstallation of Windows 7 to put an end to this nonsense. I can only say: I'm glad that I don't have to do my daily work under Windows! I would be broke within a few weeks because all I have to do is hold hands with the computer ...

If there is still an interesting update on the problem, I will expand the post here. Hope dies last, doesn't it ?! ;)