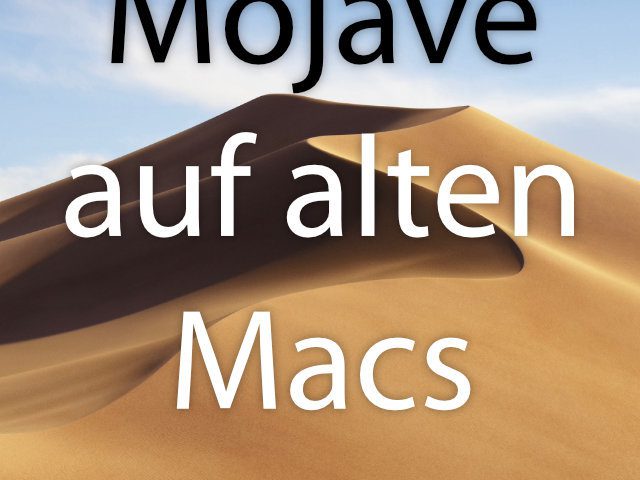 If you have an "old" Apple Mac, MacBook or iMac that no longer officially supports the upgrade to macOS 10.14 Mojave, you can create a workaround with a little additional software. Installing macOS Mojave on old, unsupported Macs is of course not recommended at this point - especially not if you are toying with this idea with regard to your work computer or similarly important computers. The software and instructions from Collin, who operates under the name DosDude1, are only shown here for handicraft projects and for general information.

Recommended reading: These Mac models are compatible with macOS Mojave

Granted, Mojave won't run on a Clamshell iBook. But Apple Mac models from 2007/2008 can be equipped with the macOS Mojave Patcher Tool for Unsupported Macs from DosDude1 with the operating system.

As in previous years with macOS Sierra or macOS High Sierra, DosDude1 has now thought about installing macOS Mojave on officially unsupported Mac models. You can now find the so-called on his website macOS Mojave Patcher Tool for Unsupported Macs - here . The Mac models supported by the Workaround app are listed on the page. The Mac Pro, iMac and MacBook Pro are those from early 2008. The MacBook Air and Aluminum Unibody MacBook are models from late 2008. The Mac Mini or the white MacBook are models from early 2009.

The proof (currently provided with a Mojave beta): hobbyist and programmer Collin shows in the video (see below) that Mojave also runs on an old Apple MacBook Pro.

It also shows which devices are not supported - these are models from 2006 and 2007 as well as, of course, those that are even older. The 2007 iMac 7.1 is compatible when the CPU has been replaced. After all ambiguities regarding the old Mac models, which can be equipped with macOS Mojave via patcher, have been resolved, the installation can begin. The individual steps of the instructions are:

Should Mojave be installed on old, unsupported Macs?

Apple thinks about it if older Mac models are not supported by new operating systems. The hardware could not have enough power or not support the system with the necessary resources. Graphics errors, performance drops, failing components such as the iSight camera, input devices that can no longer be fully used such as the trackpad in the MacBook and similar problems are known.

Therefore, you should only approach the topic and install Mojave on old, actually incompatible Macs, if you have a little knowledge of the technology, can understand the individual steps of the patch tool and know how to get back to High Sierra, Sierra if necessary or an earlier system. If you're ready for this quest, you might be interested in this video:

Note: Be sure to make a full backup beforehand

If you have the necessary technical and English skills to work through the instructions linked above for installing macOS Mojave on unsupported Mac models with the tool offered on the site, make a backup beforehand. A complete system backup of the previous operating system and your apps, data, settings and so on saved on it will help you to restore the machine in case of doubt. I can recommend you for that Carbon Copy Cloner or superduper!. In general, you should make a full backup before an upgrade, even with compatible Apple machines, so that you can always switch to the latest secure status.