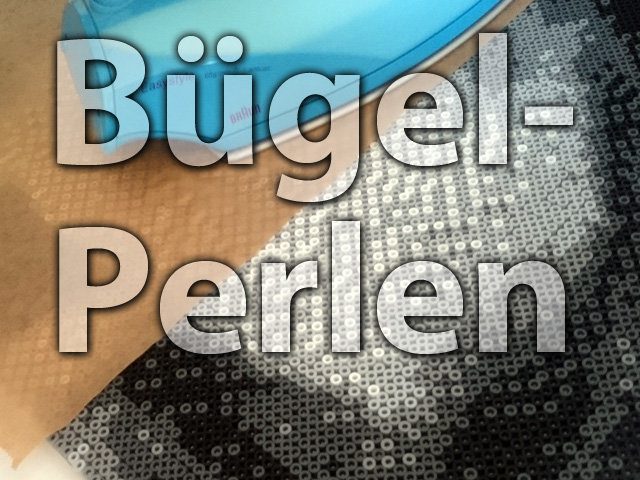 Here in the blog you will mainly find articles on Apple, technology, software and electronics, but now and then also articles on analogue jokes such as this Game of the Year 2017. Therefore I would like to introduce you to the topic in this post Iron on beads bring closer. For children as well as for adults, pictures made of iron beads - either with templates or freely laid out - can be a good activity. There are also a number of ways to use pearls, which are also known as beads; for small, comic-like pictures or for large portraits that need a few hours of work. You can find both here!

At the beginning of the large-scale project there was the creation of a template for ironing beads and the procurement of the plug-in beads. Then came the hard part ... Experiences, tips and tests from Hama Perlen in this article!

The plan: presentation of a black and white portrait

At the beginning of the project that I would like to introduce to you, the plan was to create the character "Buffalo Bill" from the film The silence of the Lambs to design; made of iron beads, of course. Hama iron beads from Denmark should preferably be used. But before they were procured, the first step was to create plug-in diagrams. There are various ways of doing this, such as: B. to enlarge a graphic on the display / screen of a device until you can see the pixels individually. Of course, special apps for Mac, PC, Android smartphones / tablets and iPhone or iPad are better. In the following I have put together some of these ironing bead template programs for you.

For the Android smartphone or Android tablet, for example, you can use the apps Bead Studio Free or the one available for 1,59 € Bead Studio Use the app. There is also the PhotoPearls app for your iOS device. You can also find the Stitch Designer program in the Mac App Store, which is actually intended for sewing patterns, but can also be useful for iron-on bead templates.

If you know any other Android or iOS apps or software for PC or Apple Mac that can be used to create iron-on bead templates, please write a comment under this post. I am happy to add other good apps to the list.

After we had cut a few pictures for the "Buffalo Bill" project, ran them through an app, improved them again and then finally converted them into a plan, the iron beads had to be found of course. Since it was supposed to be a portrait in grayscale, iron-on beads in black, white, light, medium and dark gray had to be produced; ideally those from Hama, the market-leading manufacturer from Denmark.

Since I already had this test report in the back of my mind, I simply asked Hama whether reference products could be obtained. I was then forwarded to DAN Import, the official German importer of iron-on beads. Mr. Reineke from DAN Import was enthusiastic about the project and the report and kindly sponsored it with the calculated amount of ironing beads and pegboards. With their number we had made a mistake, which should lead to problems later: D

By the way, if you don't want to buy directly from the importer, you can buy the iron-on beads while shopping at Amazon the next time. The Hama iron-on beads at Amazon Is there ... here. Not always all colors, but you can also find some of them in toy or craft stores.

Hama iron-on beads, which we got sponsored for the test report and the big portrait project. Above left: parts of the printed plug-in template.

You can also use the term plug-in pearls for iron-on beads, and one of the reasons for this is that you have to place them on the corresponding plug-in boards / pegboards. These each measure 29 x 29 beads, so offer space for a total of 841 beads. When calculating our requirements for the project, we took a wrong turn somewhere, so that in the end we only had 12 plates in use (space for 10.092 iron-on beads), even though we wanted to use almost 20.000 plug-in beads. And we had already calculated down after the start of the big stretch. At first, almost 30.000 iron-on beads were planned. However, that went beyond some planning and time frames ...

Work in progress: depending on the complexity, you can sit at a plate for up to 2 hours (especially if you are watching a film on the side ...)

If you notice that you are missing pegboards / pegboards while you are pegging the beads, then better buy a few more. We had a few other ideas to make up for the shortage. One of them was the use of adhesive film, so to speak, to temporarily store the finished samples. But that went completely wrong, which is why the corresponding plates (at least four plug-in plates, i.e. 3.364 iron-on beads) had to be almost completely reinserted. At the end, we finished inserting one half of the picture (3 x 4 panels), ironed it, put it away and continued with the other half, then ironed it and then connected both halves. That is possible, but it is anything but optimal.

Adhesive film was not a good idea for fixing beads that have not yet been ironed ...

Ironing and what to watch out for

At the beginning you have to create iron-on bead templates, then buy the necessary iron-on beads, then put the iron-on beads on the pegboards and then throw the iron on. And here of course the inevitable tip: put parchment paper on it before ironing the pearls;) Then you have to iron until the plug-in pearls are sufficiently connected.

With small pictures this is quick and usually the opening of the individual pearls remains. For large pictures that have to stick together better due to their size, you should iron longer. But plan in time here too; Especially with a large project of around 20.000 iron-on beads, you can sit for a few hours until everything holds as it should and nothing falls off or falls out.

When ironing beads, parchment paper belongs in between. Depending on the heat, duration and pressure, the pearls are then well connected and sometimes perhaps closed.

Despite some plan changes and this or that problem, the major project was still finished - on time for Halloween even;) In the following I have put together a gallery with pictures for you. Below is the finished iron-on bead portrait of Ted Levine in his role as Buffalo Bill in "The Silence of the Lambs". 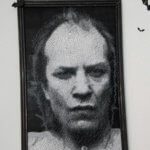 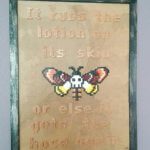 Another picture made of pearls on the topic - and suitable for Halloween;) 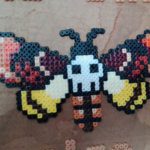 The moth in detail. 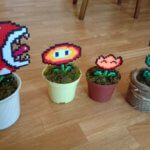 Mario flowers are also a popular motif, for which there are umpteen breadboards on the Internet. 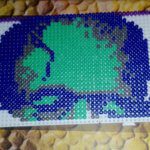 You can not only make huge pictures from iron beads, but also smaller figures, signs, coasters and decorative items. For example, there are countless iron-on bead templates for Halloween or patterns for Christmas. With the search terms "Halloween iron beads" or "Christmas iron beads" you are already well advised on Google. From simple, small pictures that only require a pegboard and a few beads, to larger graphics, there is a decent selection.

Another note about the size of iron-on beads. In the project described here, we used midi pearls, which is the medium size. In addition to these, there are also maxi beads, which are particularly suitable for smaller children with less fine motor skills, and mini beads, which allow an even better "resolution" of the images.

The midi iron beads seem to me to be the most frequently used; for example the color code 18 of the Hama pearls in black. By the way, you may have to adjust the color codes for your iron-on bead templates. For the portrait project, for example, we used light gray beads with the color code 17, but the app meant to display a 13, which is red at Hama.

Iron-on beads are a nice offline alternative to digital / technical gadgets. Whether it's Hama beads or other brands, you should plan for the exact template, the right need for iron-on beads, colors and sizes as well as enough pegboards for every project. But even if something doesn't go as planned, you can still make something of it. The next time it will be something smaller for my part: D

At this point, once again a thank you to Mr. Reineke von DAN import for the friendly support!