Jump start power bank in the test - it really works!

I've been keeping an eye out for a good two years Power banks with jump start function thrown, but then always thought: How do you want to test that? As a matter of principle, I do not write testimonials about products that I could not seriously try. The fact that I am now writing a review for one of these power banks already shows that I recently managed to get a weak car battery. 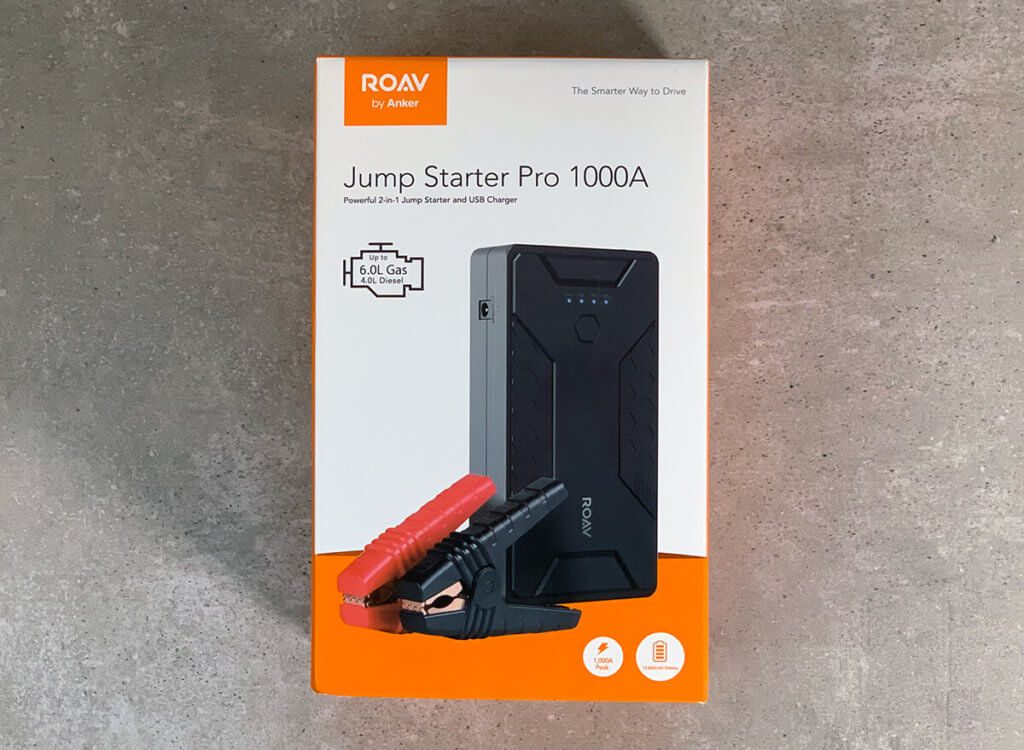 In response to my emergency request - after my car battery failure - Anker sent me the Roav Jump Starter Pro (Photos: Sir Apfelot).

How do the jump start power banks work technically?

In case someone is wondering how such a small power bank can compete with a car battery: These things are equipped with SuperCap capacitors, which have a very high capacity despite their small size. If you plug the charging cable into the power bank, it charges the capacitors. Due to the high capacity, the SuperCaps briefly create very high currents that are sufficient to start a car, but of course they are not designed for continuous load and are therefore not intended as a replacement for a car battery.

So much for the technology behind these car jump-start power banks. Now you are probably interested in what experiences I have had with this type of power bank.

A good three weeks ago I was "lucky" that my car actually broke down because the battery gave up the bucket or was extremely weak. I was standing in the city of Giessen near the train station - totally parked by other cars - and my starter didn't even make a turn. You could hear it moving, but it was far from a complete turn.

Fortunately, I was able to activate my sister, who was standing in front of me after a good 45 minutes with a jump start cable. Unfortunately, there was no free parking space in front of me, so we - totally pedestrian-unfriendly - had to stand with their car on the sidewalk to get the car batteries close enough so that the jumper cable was long enough.

The whole action from "stalling" to the running engine took a good 1,5 hours and cost a lot of nerves. But she brought me a great thing with it: I finally had a car with a lame battery that definitely didn't work. Good framework conditions for a serious test of a power bank with jump start function. 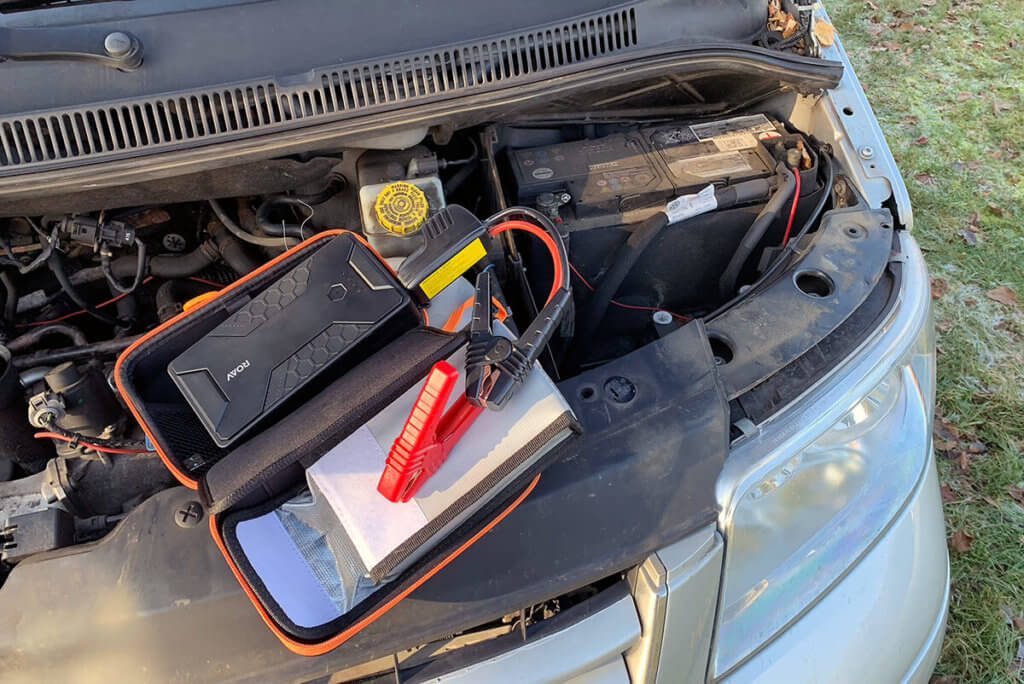 The second emergency was much more relaxed because I couldn't start at home and we had a second car if necessary. Perfect conditions for a test.

When I finally got home, I wrote to my press contact at Anker and asked if they could send me a power bank with a jump-start function for a test. A few days later it is Anchor Roav Jump Starter Pro arrived at me. At this point, a big thank you for the free test product. Until then, my car was not allowed to go to the workshop because I wanted to check the "emergency".

I was able to do that several times, because in between I had the battery on the charger, so that the car sometimes started, but on particularly cold days - right in the morning - for example, it often couldn't be persuaded to start even after several attempts. 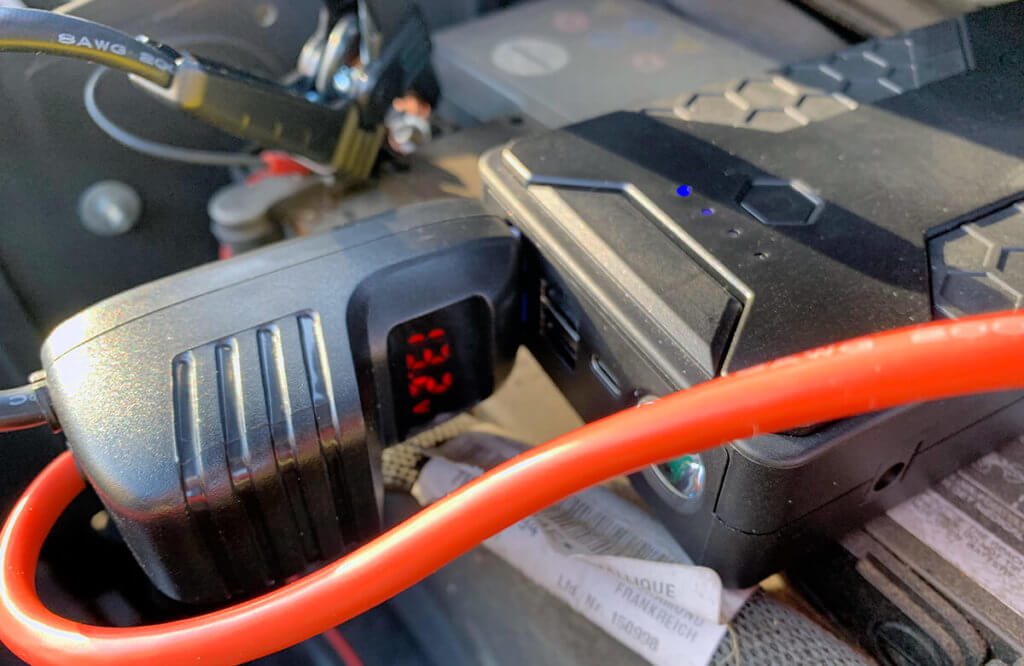 The voltage display provides information about the status of the jump starter power bank and does not show the voltage of the car battery.

The procedure with the Roav Jump Starter Pro is as follows:

This approach really worked for me every time and it was done in less than 3 minutes without any help. After I got the engine in my VW bus to work reliably even at -7 ° C in the morning, although I hadn't made it four or five times before with just the car battery, it was clear to me that the technology with the power banks really worked . I was - and still am - very enthusiastic about the little helper with so much power. 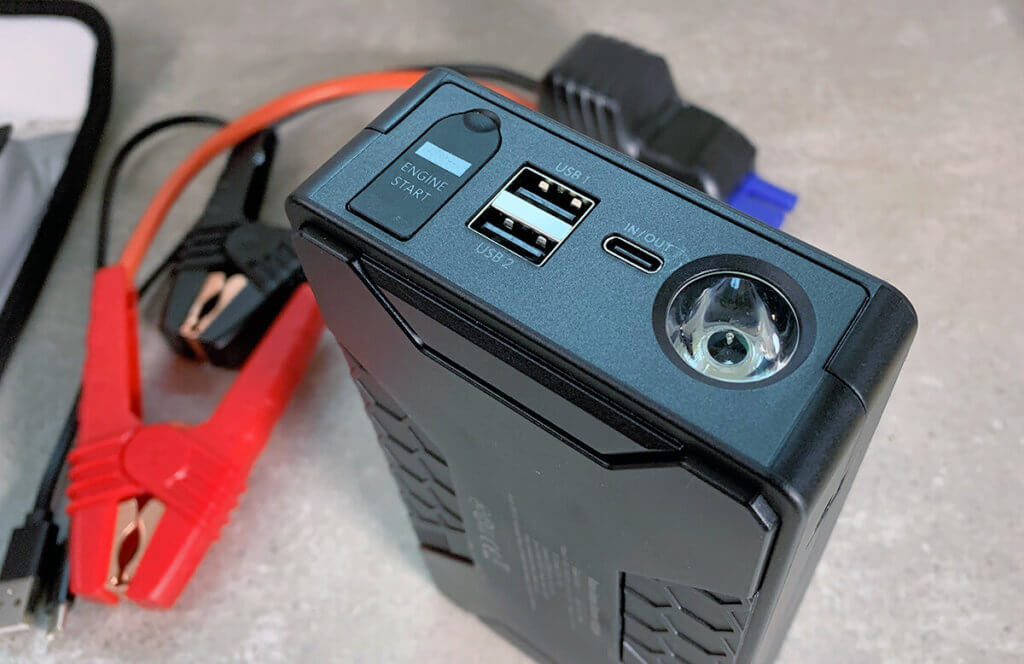 The Roav Powerbank has two USB-A outputs and a USB-C input and output, as well as an LED flashlight. On the left of the photo you can see the covered socket into which the cable with the battery terminals is plugged.

The Roav Power Jump Starter Pro was even able to start my car several times with one charge. I stopped trying it after five successful attempts, as probably nobody stays lying down more often. : D

When buying, pay attention to the specification of the maximum displacement

Although I have a car with a 2,5 liter diesel engine (VW T5), the noise when starting it by no means sounded as if the power bank had problems with the load. The more displacement, the harder it is for the battery (and thus the power bank) and starter to start the engine. This is also more difficult with diesel engines than with gasoline engines. For this reason, specifying the displacement is important if you want to buy a jump start power bank. 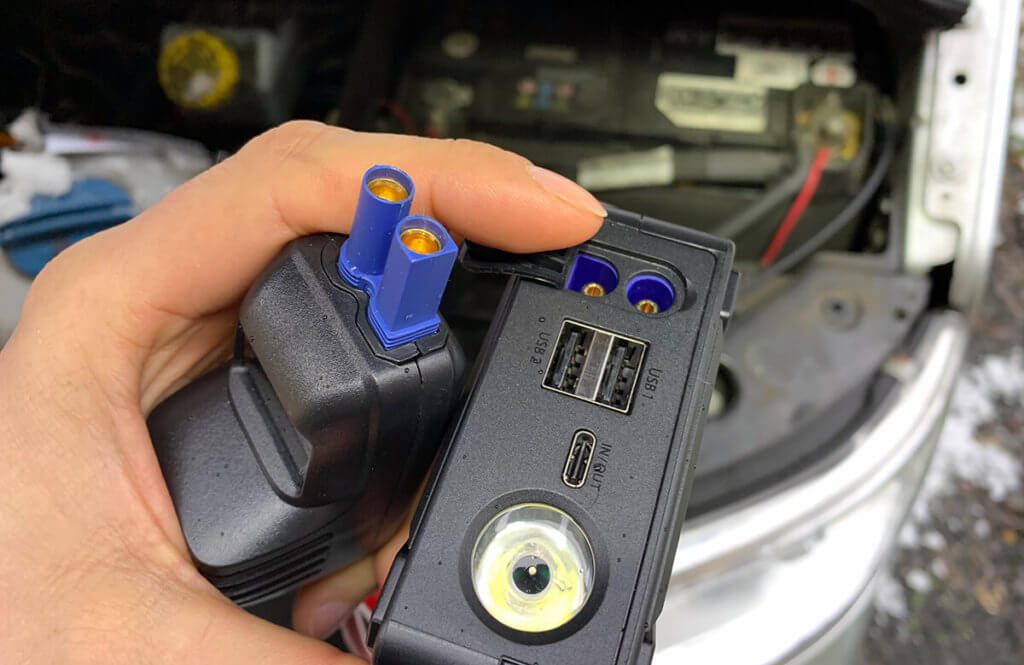 On the left I hold the cable with the battery terminals. The blue plugs go into the matching blue socket on the power bank.

The Anker Powerbank is perfect for starting aid - even for large engines. Anker gives the following specifications and accessories:

With these current and cubic capacity values, the Roav start-up power bank is definitely one of the strongest in Amazon's range. The accessories are also really commendable and well made. The charging cable, the lipo protective bag, the cable with the battery terminals and the power bank itself all fit neatly in the sturdy transport bag. This means you can store the jump start power bank permanently in the car and only have to recharge it every few months.

According to the operating instructions, it holds the charge for over 6 months and is therefore always ready to help a car battery. 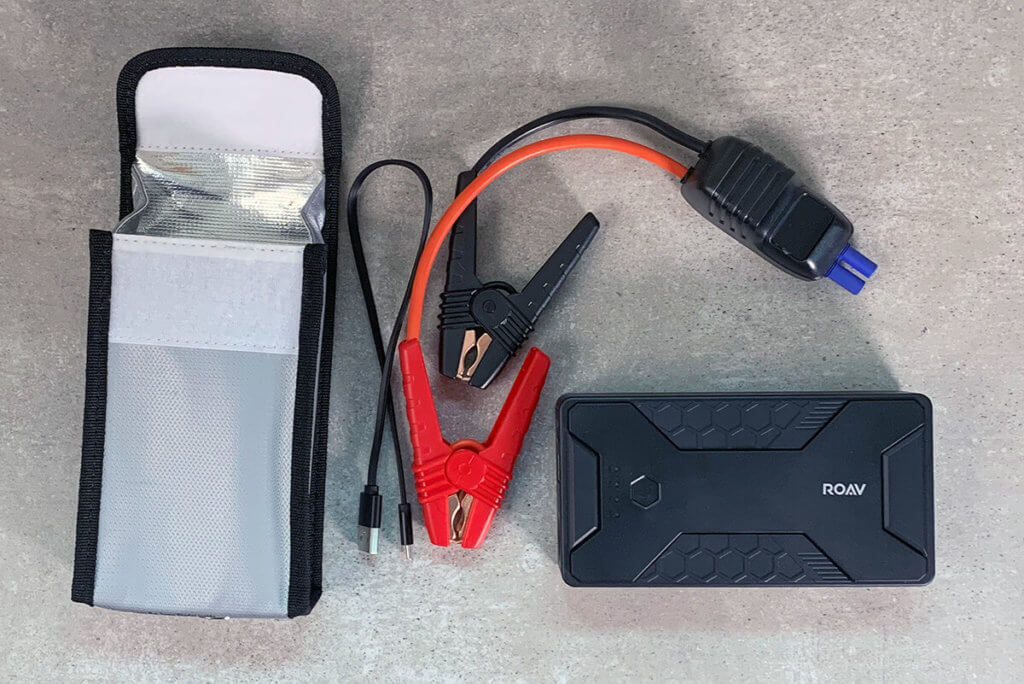 Here you can see the scope of delivery of the jump start power bank. I omitted the transport cover in the photo, otherwise it would have taken up half of the photo. But of course she is also there. 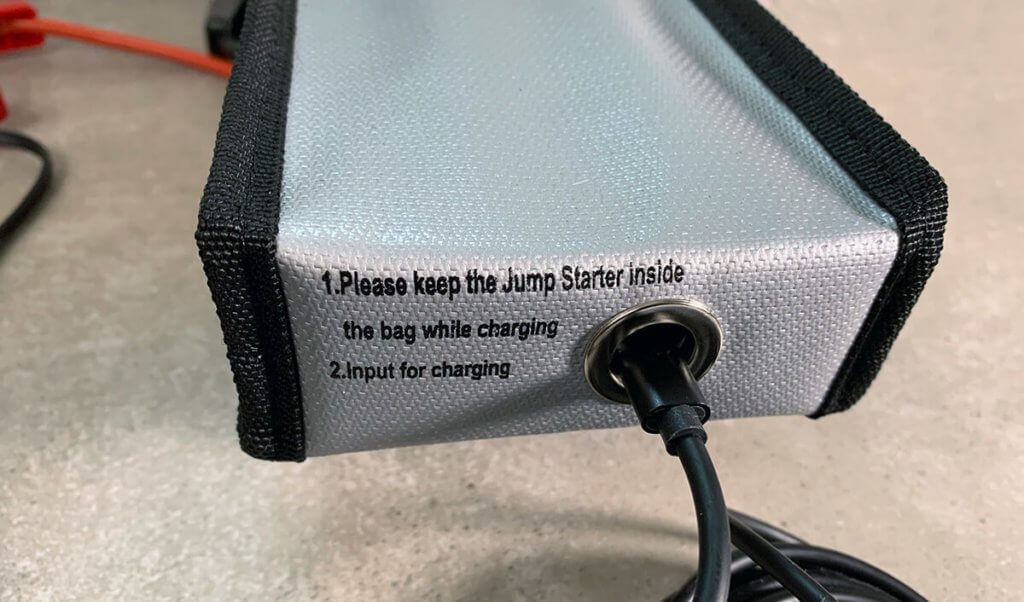 The fireproof charging case is intended to reduce the risk of fire when charging the power bank. I only know such Lipo bags from the field of model making.

Unplug the power bank after every attempt to start

An important note can still be read in the instructions. Since the electronics of the power bank get warm when starting, they cannot be used again after a few seconds. The electronics itself prevents this and, after a start, goes into a mode in which it no longer emits any current.

If you want to make a second or third attempt (this was not necessary for me), you disconnect both battery poles and pull the connector of the clamps out of the power bank. Then you should wait two minutes and try again. 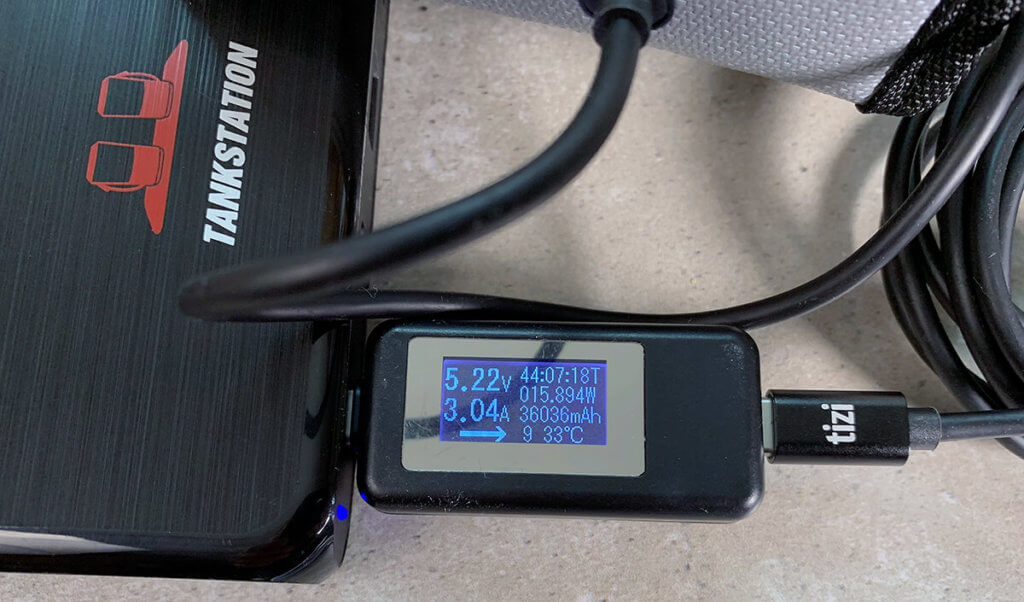 The Roav jump starter power bank not only provides a lot of power, it also requires a lot when charging: the device gets a good 3 amps when charging from my USB-C power supply. However, the included charging cable is from USB-A to USB-C. I used a USB-C to USB-C cable here in the photo.

My conclusion: A jump-start power bank belongs in every car

With some technology products, I have the feeling that you have to tell everyone about them because they are so good and practical. The jump start power banks definitely belong to this product category. They don't cost the world and can potentially save you a lot of problems, because batteries usually run out in winter and this is not the best time to wait for an hour for help or to ask people for help in a fully parked city center.

It was immediately clear to me that something like this will be in every car from now on. You may not need it for 10 years, but at some point there will come a time when you need start-up help yourself or you can give someone else start-up help - and then you are happy to have this device with you. 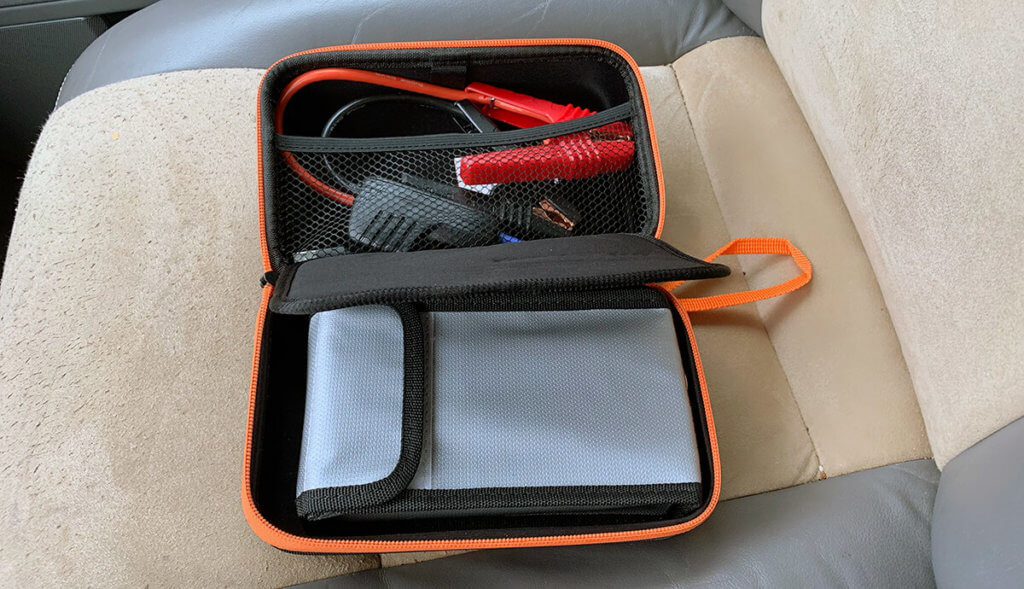 The Roav power bank is now part of the standard equipment in my VW bus. Every few weeks I get it in, charge my iPad Pro with it and then charge the power bank again. That keeps the internal battery going (Photos: Sir Apfelot).

Apart from that, it is also a power bank with USB-A and USB-C output. Even if you only need them every now and then to "jump-start" your iPhone or iPad, this is useful. However, you should be careful not to fully charge your iPad, because with a capacity of 12.800 mAh it could well be that you have a full iPad in an emergency, but unfortunately you cannot drive away because the jump starter power bank is empty.

And everyone knows Murphy's Law ... it is guaranteed to happen! But hey: If it really does happen, it is certainly easier to recharge the power bank somewhere than to be jump-started by another car. ;-)

If I was able to convince you that such a power bank is also something for your car, then you can find it here on Amazon Anker Roav Jump Starter Pro power bank, that I have.

But I can well imagine that other jump-start power banks will also work well. Just have a look at Amazon in the appropriate category and do not forget to pay attention to the displacement when making your selection.

If you already have such a device, I would be interested to know what experience you have gained. Just leave a comment! 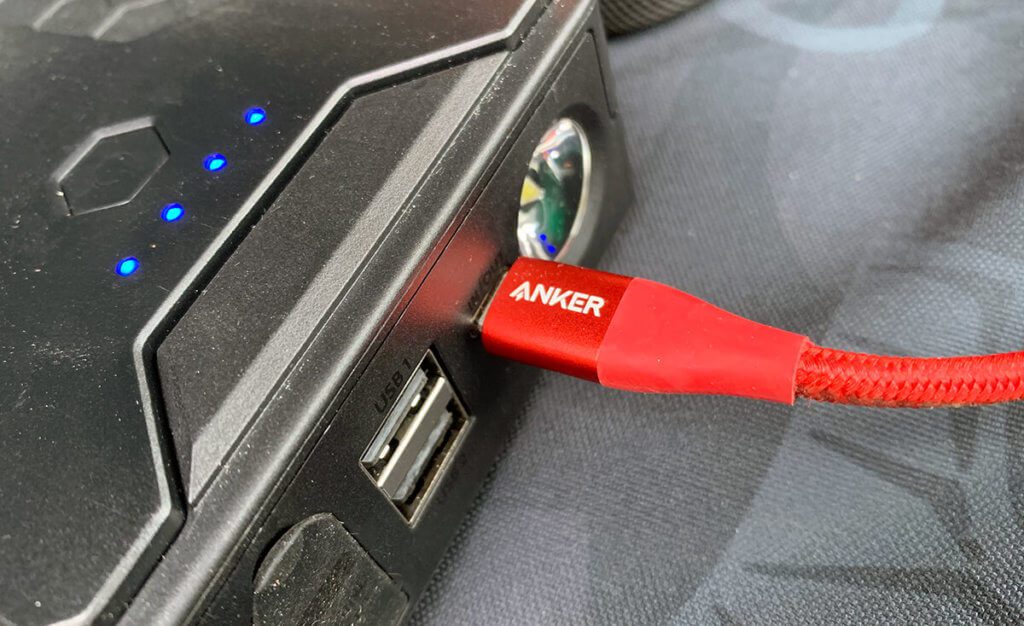 Contrary to what is stated in the operating instructions, the USB-C port can also be used as an output for charging MacBook, iPad and iPhone. With the right one USB-C to Lightning cable it also supports fast charging of the devices.

If you are interested in the instructions for the Roav Jump Starter Pro Powerbank, in which the error messages are also explained, you can find them here as a photo collage. Please excuse the poor quality, but I just took a photo of it and put it together into one picture.

This is the operating manual for the "Jump Starter Pro" auto jump starter power bank from Roav (Anker). A click on the picture shows the instructions in full resolution.