Yesterday RJ contacted us regarding the contribution to the Switching off the optical image stabilization on older iPhone models shared his experiences with the iPhone 12 Pro. This was used as a navigation system during a longer journey and attached to the handlebar accordingly. Then the image stabilization of the camera was irreparably damaged. When searching the net, you will find other such messages from users in which the image stabilization of iPhone 11 (Pro) or iPhone 12 (Pro) models was destroyed by motorcycling. A quad-lock attachment with a vibration damper could help; however, there is no guarantee of this. There's a completely different solution at the bottom.

Motorcycling destroys camera stabilization - The sensor stabilizer in iPhone 11 and iPhone 12 models can be destroyed by the vibrations of the motorcycle. Perhaps a vibration damper from Quad Lock will help (see pictures)?

iPhone on the motorcycle: The sensor stabilizer breaks due to vibrations

RJ had also written to us that the problem with the iPhone 8 did not occur when he drove several thousand kilometers through Europe with it. This may be due to the fact that the lens has been stabilized on the iPhone X and iPhone 8 (2017) as well as on the XR, XS and XS Max (2018) models. From the iPhone 11 (2019) and the current iPhone 12 - or their Pro models - the image sensor is stabilized. The new vulnerability of the devices could be due to this difference.

When searching the net, you will also find several places where you will be warned of the motorcycle's driving vibrations if you attach an up-to-date iPhone with image stabilizer to its handlebars. According to a discussion, for example, the high-frequency vibrations can damage the mechanics on the iFixit page. The entries from 2020 show, among other things, that even professional fastening with brackets from SP Connect or Quad Lock does not easily help to circumvent the problem.

In the Quad Lock Store on the Amazon site you will find various solutions with which you can attach the smartphone in the car, motorcycle, bicycle and other places. Included is a vibration damper specially developed for motorcycles, which should be able to dampen the vibrations of the engine by at least 90%. For this, the vibrations between the two parts of the housing are intercepted with elastomers. You can take a look at the product with this link. 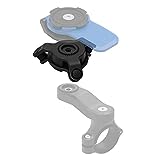 Concerns about using dampers in the iPhone holder

When RJ suggested using a Quad Lock bracket with a damper, they were able to share further interesting findings. During his research he read that damage can still result. These may be related to low temperatures: "But ATTENTION according to my research there are enough people who were initially very satisfied with the attenuation but then suddenly after a few months the awakening and the image stabilization was damaged! One person wrote that he suspected that the elastomers would not have done their job adequately at 8 degrees in his case!"

iPhone damaged on motorcycle handlebar: so what's the solution?

During the warranty period, Apple will of course repair the damage or replace the device. But that cannot be the solution. The best thing would of course be something that works permanently and not without constant repairs. If you don't want to get involved in experiments or do long research in English forums, you should leave your smartphone padded in your backpack and instead on the handlebars a motorcycle sat nav use. What are your experiences with the topic? Feel free to leave a comment on it.