Now possible: Use your iPhone as an online ID card 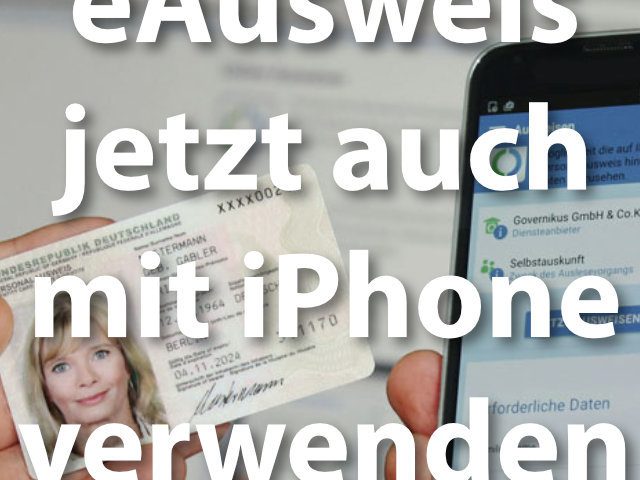 As the Federal Ministry of the Interior, Building and Home Affairs (BMI) recently announced, AusweisApp2 is now also available in the Apple App Store. This means that the functions of the electronic ID card from iOS 13.1 can finally be used with the iPhone; no longer just with Android smartphones as well via reader with Mac and PC. Reading out the ID card and using it with the Apple smartphone is possible from the iPhone 7 (2016) model. Apple's relaxed NFC policy has made sure of that.

Thanks to the NFC opening on the Apple iPhone, the electronic identity card can now also be used with the AusweisApp2 - from the iOS 13.1 system.

Like the BMI in a press release showed, only about 10% of Germans use the electronic identity card to handle official visits online. This has been possible with Android smartphones since 2017; now Apple's iOS smartphones are also being added. This requires a newer iPhone with NFC and an operating system from iOS 13.1. The AusweisApp2 app from the official store is also required. Details about the free download can be found below.

Klaus Vitt, State Secretary in the Federal Ministry of the Interior, for Building and Home Affairs and Federal Government Commissioner for IT, says about the renewed iPhone compatibility:

This means that almost all modern smartphones can be used for simple and secure proof of identity in e-government and on-site in administration. The high level of security of the German ID card was successfully transferred to the smartphone, making it more suitable for everyday use and more user-friendly.

You can find the free download of the AusweisApp2 app in the official Apple App Store. There are also thumbnails for the iPad. It seems that the app can also be used with iPadOS. Among other things, to apply for a certificate of good conduct, to get pension information, to check the processing status of the child benefit application, to introduce a petition in the Bundestag or to inquire about the points in Flensburg.