Repairing the retro console: Replace the analog stick of the N64 controller

Anyone who buys an N64 console or even still owns one from yesteryear will Problem of the worn out analog stick know. Whether it is your own fault due to excessive gaming or taken over by the previous owner: if you want to play precisely and move in 3D worlds in detail, you have to for better or for worse Replace the analog stick of the N64 controller. Here you get one Instructions for changing the Nintendo 64 stick including photos, purchase information for the new analog stick and so on;)

Since I have a special Pokémon version of the N64 console, I didn't just want to swap out the controller, I wanted to change the analog stick to be able to play with the original set. Here you can read my experiences.

If you want to order a new analog stick for your N64 controller, there are a few different ways to do it. I went to Amazon and ordered a “Replacement Joystick for N9,99” for 64 euros (price varies from time to time). Regarding the shipping, I can't complain - a small box came, stuffed with newspaper and inside the analog stick module, which was again put in a small plastic bag. In short: I was already satisfied after unpacking.

Behind this link you can buy a new analog stick for the N64 with confidence: 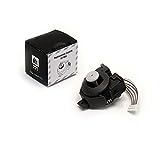 Step 2: Unscrew the N64 controller and consider all screws

Well, now you have your new analog stick for the N64 controller at home; now the task is to open the latter too. First of all, you should do that Memory card controller pack or that Rumble pack remove from the controller. Because in the opening for these expansion modules lie dormant two small screws that have to be loosened to open the control unit.

Once you have unscrewed all the screws (and laid them ready so that each screw comes back in its place later) then the fine work begins. This starts with removing the casing, as the R and L buttons (shoulder buttons) can easily fall off. But that is not a problem - they can be easily reinserted.

The clunky gray thing is the analog stick module that needs to be replaced. Pay attention to the press of the Z button and the connector for the data transmission.

Step 3: Remove the old analog stick properly - with a sure instinct

Don't worry, too spicy fine motor skills are not required here; But one must not proceed in a coarse manner either. The first thing you should try is pressing the Z button. The button itself hangs on the rear (for me: yellow) casing of the controller. However, the pusher is clamped into the analog stick module.

To remove the Z button, push the left bracket a little to the left (the right one is rigid and cannot be pushed to the side) and take out the small circuit board. The rubber mat can fall off here, but like the R and L buttons, it can easily be reinserted; basically just put it on, done;) Then there is the plug of the analog stick module, this must be carefully pulled out upwards:

Then you can also loosen the three screws of the analog stick and then finally take it out. Don't put the screws too far away, we'll need them again soon ...

The picture above shows you the newly installed analog stick of my Pokémon N64 controller. When installing, I proceeded as follows: plug in the plug of the new module, screw the module tight, insert the pusher for the Z button. Finished! Now the last step follows:

Step 5: screwing the controller together

Check again whether everything is in the right place, whether the shoulder buttons are where they should be, whether the cables of the new module are well positioned, etc. Then you put the cover on and screw the screws back in. Don't forget the two small ones that sit in the expansion slot. Is everything screwed? Well, then it goes to the additional step.

Get to the console! If you've played with a worn out analog stick before, you'll notice the difference right away. I have with Shadowman Immediately run better, aim more precisely and also be able to evade more effectively. I can recommend replacing the joystick module on the N64 controller even if you are toying with the purchase of a no-name replacement model. I have one there, and the controls are not precise either. Although the stick is not worn out, it is too tight - either you press too little or too much ... not good either.

In general, the imitation N64 controllers without Nintendo lettering are also good for gaming; however, some may bring an imprecise joystick with them - but you can also exchange that;)

Conclusion to switch to the N64 analog stick

Once you've ordered the new module, that's it Replacing the analog stick on the Nintendo 64 controller actually a breeze. Basically, you only need a suitable screwdriver and a little finesse when unplugging and plugging in the connection. Otherwise, the old technology is both simple and robust enough that you can carry out repairs yourself. What are your experiences with tinkering with retro consoles? Feel free to leave a comment!