The power bank was made available to me free of charge for the test, but no conditions were attached to it. The provider could not read my test report in advance and influence it. 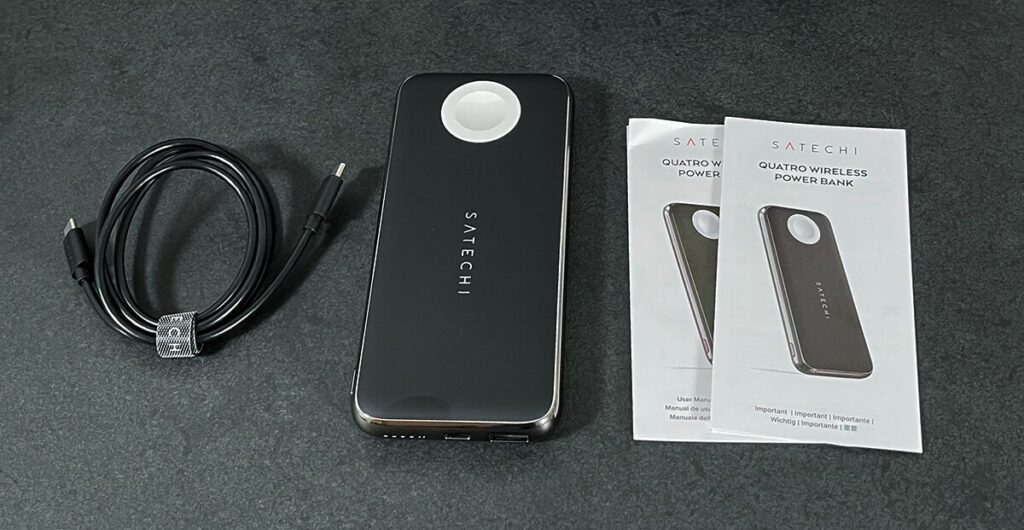 The Satechi Quatro Wireless Powerbank offers a USB-A port, a USB-C port with power delivery, an area for wireless Qi charging and a charging adapter for the Apple Watch (photos: Sir Apfelot).

Technical data of the Satechi Powerbank

The following data shows what the Satechi battery can do: 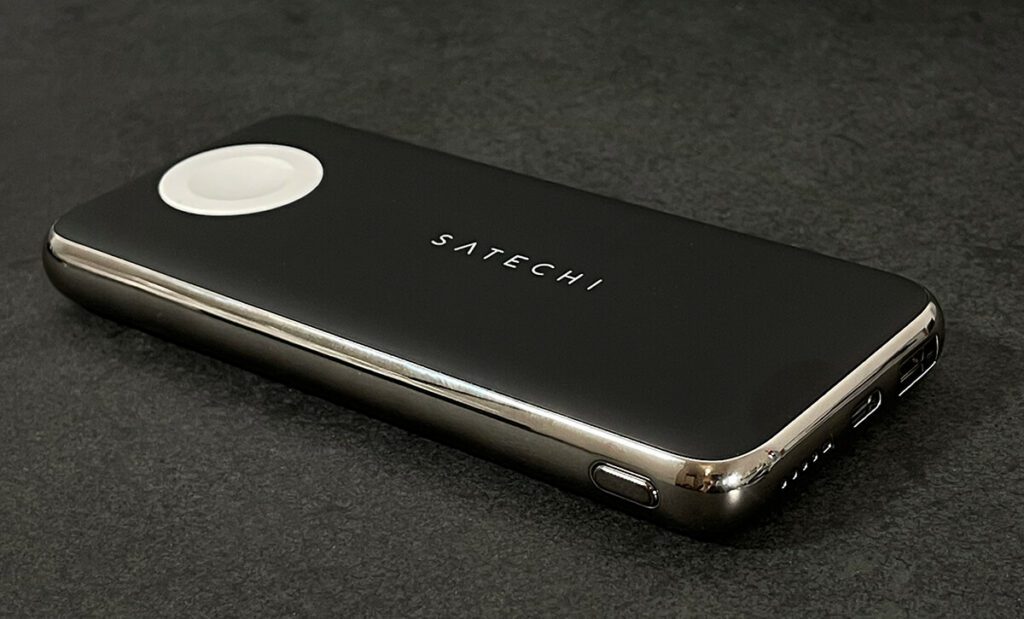 The Satechi power bank is definitely an eye-catcher and one of the most elegant power banks that I know.

Design and processing of the additional battery

The Satechi power bank is by far the most elegant power bank in my collection. Due to the design with the rounded edges, the chrome border and the matt black color, the power bank already looks very classy. Even the Apple Watch charging adapter, which unfortunately always has to be white according to Apple's licensing guidelines, is very well integrated.

Despite the matte surface, the power bank is surprisingly less susceptible to dust, which tends to collect on matte plastic. The trick is probably that the plastic is still relatively smooth and not rubbery, as I've seen with other auxiliary batteries.

The LED display for the battery level and wireless charging is also nicely integrated. This is housed in the edge and is therefore hardly noticeable. For the appearance, the Satechi battery gets a straight one from me. 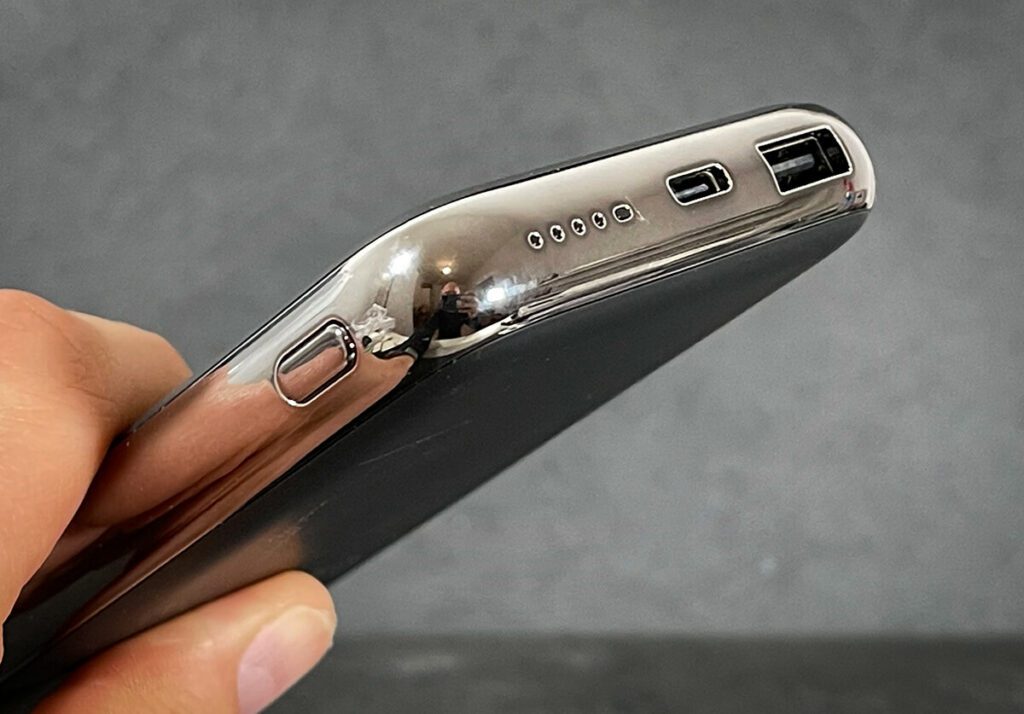 The charging ports are located on the short side of the power bank - as are the LEDs that show the battery level and the status of wireless charging.

Of course, the design is also a disadvantage in a certain way, because the power bank should hardly be able to withstand being driven over it in a car, as it is with the Zendure power banks the case is. For me, however, this is okay, because the "hardest" thing power banks have to put away with me is transport in a hiking backpack and that is certainly not a problem for the Satechi power bank. 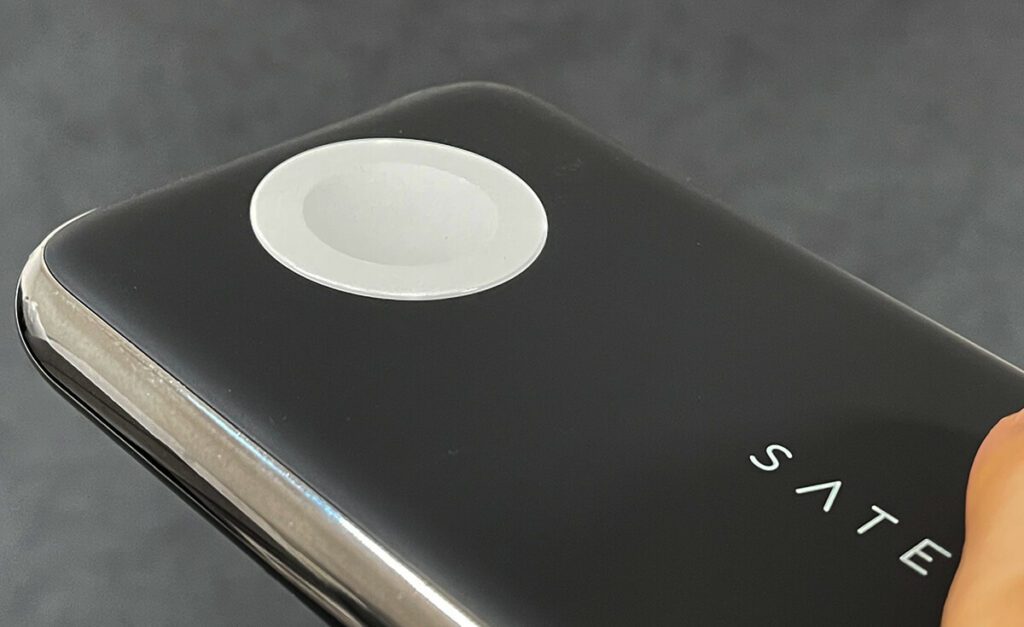 The Satechi Quatro Wireless even has a way to charge the Apple Watch. And it does it faster than the original charging cable from Apple.

Which devices can I charge?

In principle, you can charge any Apple device with it. Since it can charge the Apple Watch (all models) as well as the iPhones and AirPods (Pro) as well as the iPhone, iPad and MacBook, it can be used very flexibly. There is both a USB-A and a USB-C output for wired charging. The USB-C output supports fast charging after USB Power Delivery standard, which all current Apple devices also use.

Thanks to the Qi charging option, the AirPods and iPhones can also be charged wirelessly. Satechi states that you can charge up to three devices in parallel using the four charging options. An iPhone on the Qi charging area, an iPad on the USB PD port and the Apple Watch on the wireless charging station for the Apple Smartwatch would be conceivable.

The entire control of the power bank works with a button that is located on the side in the silver edge. I briefly list what you can do with it: 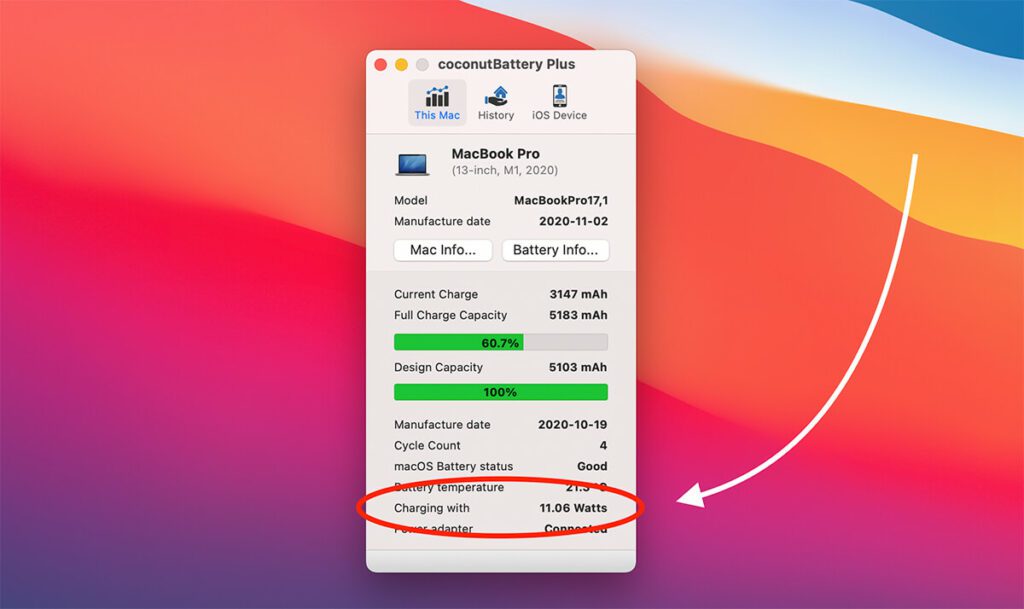 According to the Coconut Battery, my Apple SIlicon MacBook Pro 13 inch is charged with 11 watts when the power bank is connected (Photos: Sir Apfelot).

In order to get a few values ​​from practice, I tried the power bank with my devices. A short version of the results can be found here:

In my opinion, two things are noticeable about the measurement results. On the one hand, the almost 18 watts that it delivers are quite exciting for owners of a new Apple Silicon MacBook Air or MacBook Pro. The two laptops are equipped with the energy-saving Apple M1 processor and require just under 20 watts of power even under load - even if they are being charged. The 18 watt power provided by the power bank is sufficient to charge the M1 laptops even when they are in use. 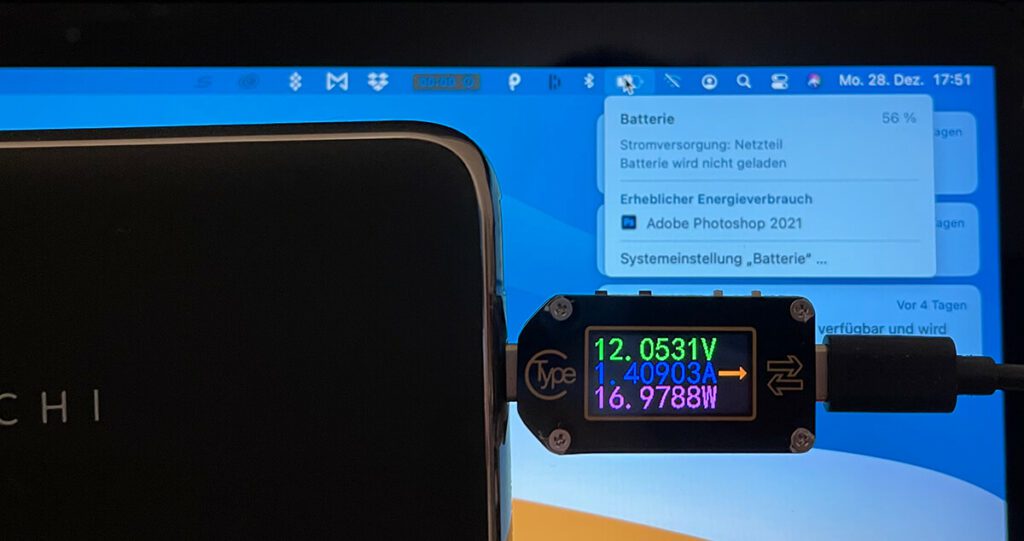 Almost 17 watts flow into my MacBook Pro 15 inch with an Intel chip, but the device consumes more power and so the power of the power bank is not even enough to slowly charge the MacBook Pro.

The second nice thing is that the power bank charges the Apple Watch very quickly. In fact, even a little faster than the original Apple charging cable, which works for me at around 1% per minute.

I already had that a while ago Terratec Charge Air Key keyring and I baked the Satechi Magnetic Charging Dock in the test. Both have the small disadvantage that they charge the Apple Watch a little more slowly than the Apple charging cable. It is all the more gratifying that the Satechi Powerbank is not only on a par with the Apple cable, but even better.

Since I wear my Apple Watch on my wrist day and night, it happens more often that I have to charge it during the day. The fact that the charging time is shortened with the power bank and that I don't have to take the Apple Watch down for as long, of course, suits me. 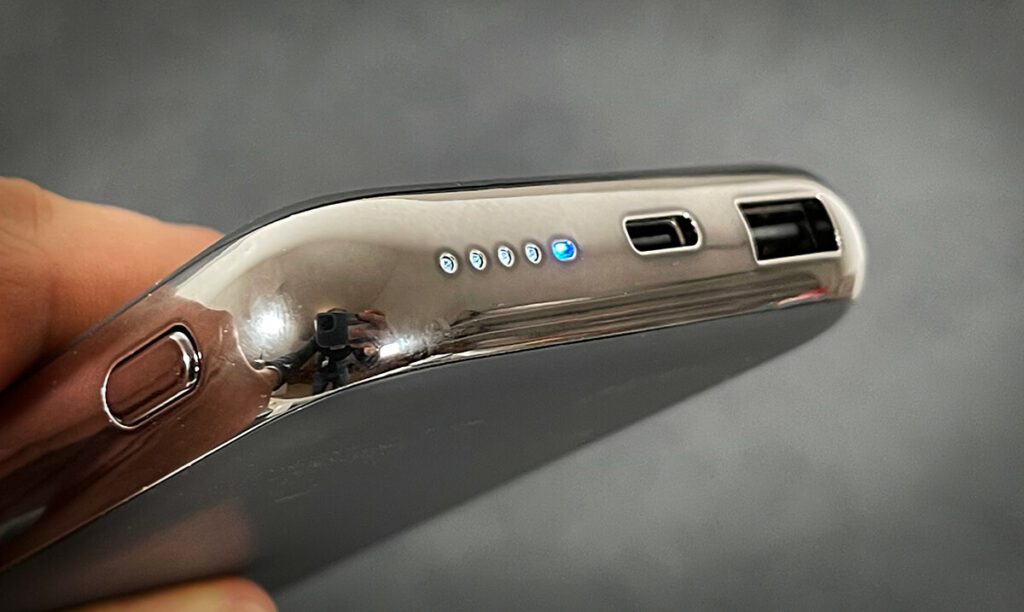 Here you can see the four white battery status LEDs and the blue LED that signals that wireless charging is activated.

Advantages and disadvantages of the Satechi Quatro Wireless 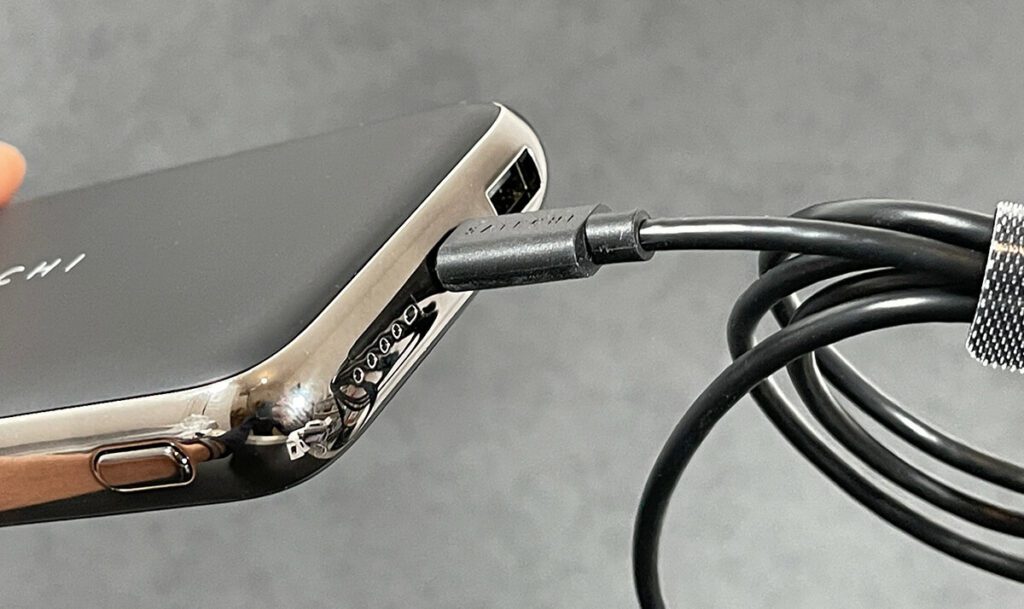 The Satechi Powerbank is charged with the supplied USB Type-C cable. This works relatively quickly thanks to USB Power Delivery.

My conclusion on the Satechi Quatro Wireless

With 10.000 mAh, the Satechi Powerbank is less interesting for Intel MacBook Pro laptops, as the power of the Powerbank cannot even keep the battery level during operation.

For the M1 Macs, however, the Satechi Quatro Wireless is perfect. It is also a good companion for iPhone to iPad, although in this case I prefer fast charging via USB-C, which the power bank also supports. You can also charge your iPhone wirelessly, but with 5 watts of power, this is a rather leisurely way.

My AirPods case regularly ends up in the Qi charging area because I often have to pick it up when I take the AirPods out of my ears for a short time. In this case it is useful if there is no cable attached.

The last point I want to make is capacity. With 10.000 mAh, the Satechi Powerbank is not the largest on the market. Anyone who travels a lot with an iPad or an Apple Silicon Mac should possibly resort to a model with 26.800 mAh in order to be able to cover the power hunger of the devices. Here I can Orito additional battery I highly recommend it, which I use a lot. However, you also have a decent “brick” in your pocket.

The Satechi Quatro Wireless is a good compromise between charging flexibility, capacity, and weight - and it looks damn good at the same time.

If you want to buy it, you can find it here at Technology direct or here at Grave accent.

For the sake of completeness, I have also photographed the instructions for you. You can see it here:

The operating instructions for the Satechi Quatro Wireless Powerbank - short, well illustrated and easy to understand.