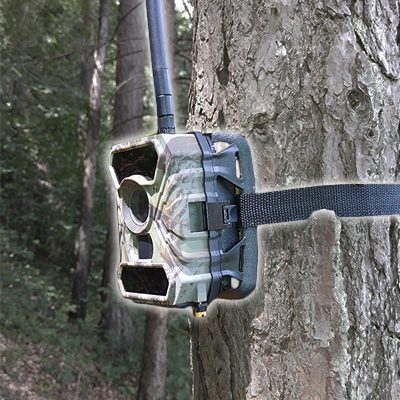 The photo trap as a topic here in the blog already existed last december; Now the topic is to be expanded with regard to a game camera with SIM card, if you want to see the pictures taken by the camera for animal pictures or for monitoring the holiday home immediately. A game camera with a SIM card is also ideal for research and observation of animal populations that are shy and would hardly approach humans themselves. The same can be said of burglars, which is why using it as a surveillance camera is also a logical area of ​​application.

Wildlife camera with SIM card: The example from icuserver seems to me to be the best model - a very well-rated photo trap for day and night that sends every photo directly to the smartphone via 3G cellular network.

Example of a wildlife camera with SIM card: 3G photo trap from icuserver

A photo trap that is not unlike the ones in the December article, but has a few additional features, is that of icuserver. In addition to the option of saving the pictures taken with this wildlife camera on the enclosed SD card, there is also the option to save the photos thanks to the also enclosed SIM card to be sent directly via cellular network. This is ideal for everyone who is not on site or who does not want to read out the memory after days, weeks or months. Especially if you need a secure surveillance camera in the garden, at your holiday home or in your apartment during your vacation, the icuserver model can help.

On the product page you will find a model with a "normal lens" which covers an angle of 50° and a model with a "wide angle" which is 100°. In addition to the 8GB SD memory card, SIM card, cables, the camera itself and other accessories, there is also a not inconsiderable antenna included in the scope of delivery. This of course makes the photo trap with SIM card really capable of sending; but also more noticeable.

The sample photos and textual versions of the wildlife camera presented above - including headings such as "The first GSM camera that works“- show that the price of the device is well justified. The 3G standard does not (only) stand for GSM or GPRS, because that would be 2G. The photos are sent at a good speed via UMTS or HSPA. I recommend anyone new to the world of mobile communications terminology this declaration on the individual cell phone generations.

Back to the reviews: The simple activation of the enclosed SIM card is also praised. Of course, this does not run forever without additional costs - a type of prepaid data package must be re-booked after a few months as required. Details can be found on the Product page at Amazon.

Alternatives with a critical view of the same

When looking at alternatives, I noticed a lot. For example, the Seissiger wildlife camera only a wireless standard of 2G with and the two reviews with 5 stars each do not say “verified purchase”. With a product for 300 euros, that makes me a bit critical. I also see no indication of verified purchases in the good reviews of the cheap alternative Hunting Trail Camera with Full HD recordings, 3G and your own display - for "only" 175 euros. A similar camera for around 100 euros comes from Lixada. I don't like to link it at all because it has a lot of bad reviews (verified buyer) and doesn't seem to be a big seller.

Game cameras with GSM, GPRS, UMTS, HSPA and so on send you the pictures taken directly via MMS or in an App to the smartphone. I have tried to give you examples of such a game camera or of game cameras with rather mixed performance here. You are welcome to give your opinion on the presented game camera with SIM in a comment or show your game cameras and experiences with them. For a wildlife camera without mobile communications as a simple photo trap in your hobby, I recommend the article linked at the top :)