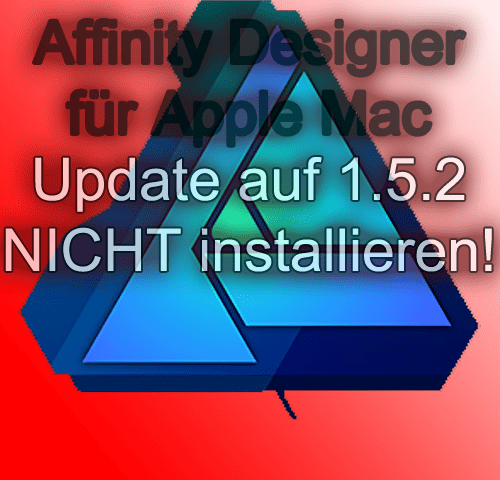 Update, November 15, 2016, 21:30 p.m .: As the Affinity Facebook team informed me, the new version is 1.5.3 for Affinity Designer out now. You can . download. Not only is the new Touch Bar of the current MacBook Pro supported along with 32-bit documents, there have also been "various improvements and fixes", as the update description shows and thus probably indicates the problem below.

For the Apple Mac version of Affinity Designer is currently the Update auf die version 1.5.2 ready, however warns the software company Serif before installing it. So if you should get a message from the Mac App Store or from the program itself that an update to the new version of the designer is available, then do not download it. If you've already loaded it, don't install it. Already happened? Then hopefully you haven't started the program yet ...

As the company behind the program announced today, you shouldn't install said update! This is the official rationale from the Affinity.Serif.com forum: "Running this update will reset any brushes, styles, text styles, swatches, keyboard shortcut customization and workspace layout you may have added."

Translated it means: "Running this update will reset any brushes, styles, text styles, patterns, keyboard shortcut adjustments, and surface layouts that you may have added.“- In short: Anyone who has set up the program to suit their needs and filled it with their own content will lose this working status. Therefore the Designer Update to version 1.5.2 should not be carried out.

Serif Affinity also alerts its designer users on Facebook so that they do not use the update to version 1.5.2 from the Mac App Store; Screenshot by Sir-Apfelot.de

Aimed for a solution within 24 hours

"We are extremely saddened by this and will provide a fix within the next 24 hours.“, You can still read in the forum. The new update with the fix will then be the version 1.5.3 bring. This can then (hopefully) be installed as usual and the program, including personal adjustments, can be used. "We apologize again and we will make sure that this never happens again. ”Concludes TonyB, one of the moderators at the Serif Affinity Forum.

Affinity Photo and Designer can be downloaded as beta for Windows

Yesterday I already had the topic Affinity for you. But there was a much more pleasant starting point: the photo and designer of the Serif product line are now available in public beta. The relevant article you can find here. If you're still looking for a manual with tips and tricks on the photo program, then I have it . something for you.