AirFly: Bluetooth adapter for jack, AirPods and other BT headphones 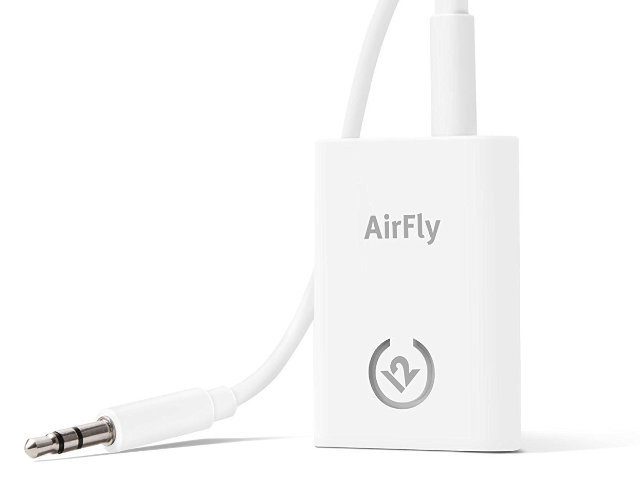 Twelve South recently launched the AirFly adapter for devices that have a jack output, but which you want to use with Bluetooth headphones such as the Apple AirPods. The device can easily be connected to the television, the headphone connection in the airplane, the fitness machine or another source using a jack cable. The battery gives up to 8 hours of running time; Charging via micro USB is also possible with a power bank.

The Twelve South AirFly Transmitter for the coupling of the jack connection and wireless headphones lasts up to 8 hours on the battery.

Use wireless headphones with audio sources that only offer one output via a 3,5 mm jack - this should now be possible everywhere with the AirFly. Simply connect the audio output of the television, entertainment system, fitness device, vintage radio or the like using a jack cable. The AirFly Bluetooth transmitter sends the music, the audio book, the podcast or whatever else you want to hear to your headphones. In addition to the Apple AirPods, these can also be other wireless headphones.

1.623 Reviews
Wireless transmitter for AirPods and headphones
The Twelve South 12-1801 Airfly Wireless Transmitter enables you to pair wireless headphones with headphone jacks. So you can z. B. Use AirPods with the in-flight entertainment systems of an aircraft or the media offering in the gym. The internal battery lasts 8 hours and can be charged via a USB cable.
Buy it at Amazon Price includes VAT, plus shipping costs (updated: 18.10.2022 at 00: 45 clock)

Transport devices and cables in an organized manner: Cocoon GRID-IT put to the test

In addition to the Twelve South AirFly Transmitter, the scope of delivery also includes a connection cable for the 3,5 mm jack socket and a USB charging cable. This (or a similar cable from your collection) can not only be used on power supplies, but also to charge the AirFly on the go with a power bank. At Amazon and elsewhere, some people complain that there is no Lightning or USB-C connection, but they find that these connections are currently rather seldom used - especially for devices that are not exclusively made as Apple accessories I think the grumbling is on too high a level.

Here is a video that clearly shows the benefits of the Twelve South AirPlay Transmitter: