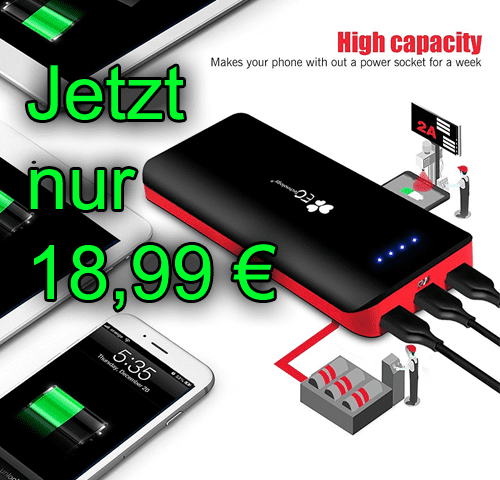 At Amazon you can get one currently and only for a short time Power Bank with fabulous 22.400 mAh for only 18,99 euros. The part with three connections usually costs a good 29,99 euros. If you choose the black and red version at the link below, you will get it 11 Euro discount as part of an Amazon deal. What you can do with the 22.400 mAh Powerbank, I want to briefly outline for you in this message.

The little device from ECTechnology measures just 15,75 x 7,87 x 2,0 cm and weighs only 450 grams. Whether in hand luggage, suitcase, backpack, duffel bag or in your trouser pocket: you always have enough power with you. Three USB outputs provide power to your mobile devices (iPhone, iPad, other smartphones and tablets, etc.) at home and on the go. The device itself is super-fast via one DC 5V 2A input loaded. (The device can also be used as a torch ...;))

You can use the power bank made cheaper by Amazon to charge three devices at the same time. These can have different capacities and requirements. A chip in the power bank identifies the needs of the devices and regulates each connection independently of the other two. This way, the connected devices are ideally charged. Incidentally, the power bank shows how full your own battery is via four LEDs. A clever device!

Powerbank from EC Technology cheaper and better than others

Out of a total of 1.519 reviews on Amazon, 1.054 are 5-star reviews; 223 bring 4 stars. Not a bad cut. But before I bore you any further with facts and figures, here is the link to the power bank, which is currently being made cheaper by Amazon. Have fun saving and recharging!

And here again all the data and facts at a glance (including links to the offer):