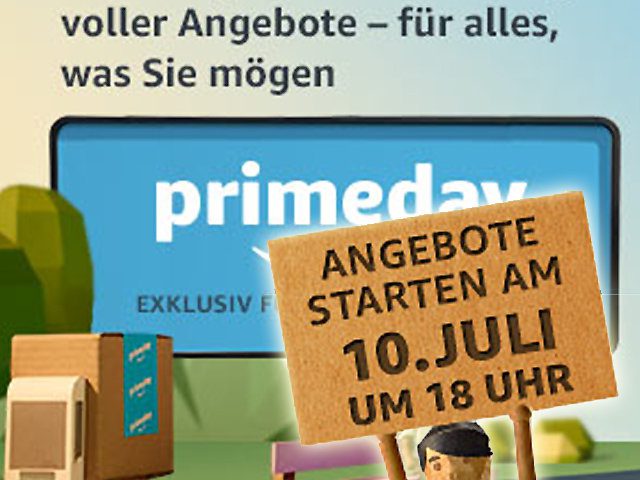 Yesterday, Amazon officially announced Prime Day 2017 and released a lot of information about it. In addition to savings offers for Prime members, this bargain day, which incidentally is supposed to last 30 hours, is sure to generate a lot of income for the mail order company. Incidentally, the starting shot is on Monday, July 10, 2017 at 18:00 p.m. The Amazon Prime Day itself then expires on Tuesday, July 11, 2017. From 6:00 a.m. to 23:59 p.m. there are numerous deals, sales and lightning offers.

Here you can create a free membership for 30 days

Before and during Amazon Prime Day 2017, there are other deals, promotions and discounts in addition to the permanent Prime benefits.

On the page linked above you can not only set up a free trial membership to Amazon Prime for 30 days, but also follow current offers. In the run-up to the event, from July 5th to 9th, there will be a preview of deals, lightning deals and more. So you can find out about many promotions during this time - you can decide whether you want to take advantage of them or whether you want to benefit from the spontaneous offers from Amazon and the dealers on the Marketplace, depending on the deal. With the Amazon Prime trial subscription you don't pay anything on top;)

In addition to information, there will also be some offers as part of the from July 5th Amazon Prime Week - Among other things, you can benefit from these actions:

All official information from Amazon can be found here

According to Amazon, 24 hours are not enough, which is why the Amazon Prime Day 2017 should take six hours longer. As you can already read above, various offers can be used for much longer. You just have to strike early enough. From the corresponding Tuesday at 6:00 a.m. there will be hundreds of offers, promotions and deals. In addition to Amazon, 40% of the promotions on Prime Day should come from retailers. Every 5 minutes there are also lightning offers that are valid for a maximum of 6 hours - or while supplies last. There are also special "offers of the day" and much more.

In 2017, Amazon Prime Day is once again a highlight of the otherwise already applicable Amazon Prime benefits such as free films, series and music, preferential shipping, and so on. If you don't have an Amazon Prime membership yet, then you can basically consider yourself lucky. Because you can now simply take out a trial membership for Amazon Prime, use it for 30 days (and thus tap the Amazon Prime Day 2017) and benefit from free digital content without making any purchases. I would do it - if only because of the films and series;)

Advertising on the day of action

Amazon has released a promotional video for Prime Day 2017 in which you can see the organization behind the daily wholesale - also and especially on the upcoming Amazon Prime Day: