App tips: Remote control of the iPhone camera from the iPad

Yesterday I used my [octocopter-> octocopter] for the first time with an iPhone as a camera. I screwed the iPhone 5 to the camera frame of the microcopter with the Glif and a rubber band and use it as a [FPV camera-> first-person-view]. After I had done a few laps, I wanted to watch the video at home and was sorely disappointed because I had unfortunately somehow put the iPhone camera into [lock mode for the autofocus-> af-lock] the evening before (by the way, if you leave your finger on the display for about 1-2 seconds if you want to focus on an object). Accordingly, the film was just a faded something, on which it was impossible to tell that it was [aerial photos-> aerial photos].

In the evening I pondered how the iPhone camera could perhaps be operated remotely from the iPad. And it's hard to believe - there is an app for that! There are actually quite a few app candidates who can help you here. I'll briefly introduce three that I find particularly interesting:

Remote shutter - unfortunately only to be used via Bluetooth

The first app I found is called RemoteShutter and enables two iOS devices to be paired with each other. After starting the app and pressing the Bluetooth symbol, you set whether you want to use the respective device as a camera or as a remote control. What I noticed right away is the "subterranean quality" of the live stream. This means that the image that you see on the remote control (in my case on the iPad) is extremely bad and pixelated. I assume that is because an [HD video stream-> hd video] cannot be implemented via Bluetooth. The second is that the app can only take photos. And the third point (which is decisive for me) is that you can only connect the devices via [Bluetooth-> bluetooth]. If I can fly 100 meters high and 300 meters away with my microcopter, then the [range of Bluetooth-> bluetooth] is surely exceeded several times. So: nothing for me.

iStopMotion - connection via WiFi, but only for photos

IStopMotion's software is a collection of apps for iOS and Mac OS X that can be used to make small films with stop-motion technology. For example, you use the app iStopMotion for iPad as a remote control and iStopMotion Remote Camera on the iPhone as a camera. You put a Lego man down, take a picture, then move it a bit and take another picture, etc. The software supports you in the way that it allows you to see the picture of the iPhone camera on the iPad or Mac and trigger the camera. This eliminates the need to crawl around on the floor if you have the iPhone on a mini tripod at eye level with the Lego colleagues.

You can also use the software for my purposes and trigger the iPhone camera on the microcopter. You can check the image live on the iPad beforehand and see what ultimately comes out. The live image is transmitted via WiFi, so the preview image is also very good. The range too, of course. However, the software has one limitation: you can only take photos with it. But it is well suited for that.

The IOS software AirBeam is also for iOS devices and allows the camera to be triggered remotely by another iOS device. The devices are also coupled via WiFi, so that you can count on a good live image. In contrast to the apps mentioned above, AirBeam only records video and cannot take photos. The video quality can be adjusted and ranges from "low" to "HD". Audio can also be recorded, but in my case it is of no interest as you would only hear the crackling of the propellers. In the area of ​​image transmission and video quality, AirBeam offers numerous settings. It pays to play around a bit before it gets "serious". :)

Ultimately, my choice falls on iStopCamera and AirBeam, because the WiFi connection is absolutely necessary for me due to the range. Since I rarely find an open WiFi in the open, I ordered a [mobile WiFi router with battery-> mobile WiFi router]. My choice here fell on that TP-Link TL-MR3020. Although this does not have an integrated battery, it can be supplied with power via a [USB plug-> usb]. For example, you can use the Additional battery from ZNEX use. 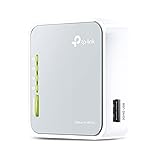 I don't need a "wire" to the Internet for my application, because I only need my own self-contained W-LAN. iPhone and iPad don't access the web, so I can use the router without a surf stick. If you like, you can also use the iPhone's personal hotspot to set up a WiFi connection, but there are a number of providers who have not released this function. For this reason, I also chose the solution with the battery wireless router.