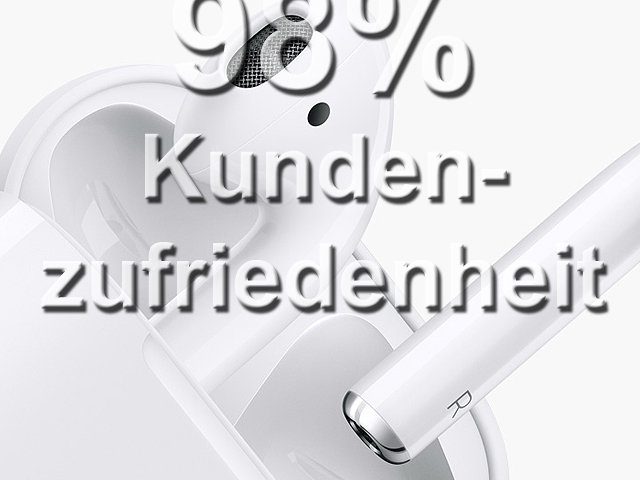 The Apple AirPods, the wireless headphones from Cupertino that are paired with the iPhone via Bluetooth, are not a rare topic here in the blog. Shortly after the official presentation of the AirPods by Apple, for example, there was a lot of ridicule - They would look like the heads of electric toothbrushes and would be lost quickly, it was said. However, a current survey, the evaluation of which was published on May 1, 2017, shows that Apple was once again able to assert itself against ridicule and jokes with the AirPods: around 98% of users seem to be quite satisfied with the wireless headphones.

Apple AirPods: iFixit shows how much technology is in the wireless headphones that communicate with the iPhone via Bluetooth.

Survey shows: 98% of users are satisfied with the AirPods

In a survey by Experian and Creative strategies a total of 942 people were asked about their opinion on the Apple AirPods. Of those surveyed, 82% said they were "very happy" with Apple wireless headphones. Another 16% of users were “satisfied” with the AirPods.

The remaining 2% are distributed among statements such as “neither satisfied nor dissatisfied” and “dissatisfied”. Despite all fears, the Apple AirPods have become a success - at least if you have the Survey of 942 people regards as representative. In addition to the AirPods, the survey also looked at voice assistants and their use. I find it a bit surprising that 47% (want to) use Siri, Alexa and Co for financial matters.

Official pages for the Apple AirPods

If you are looking for information, data, hints and tips about the Apple AirPods, then you should go to apple.com drop by. In addition to the pure product presentation, the page in the support area also has many application notes and advice on use and problem solving ready. In addition to Apple, iFixit can also be an important source for you users of the AirPods - for example, if you are looking for a repair or configuration. iFixit offers one for this Teardown of the headphones. And even if you don't want to tinker with the AirPods yourself, the pictures from iFixit show the enormous amount of technology in the AirPods. Madness!

Quarterly figures show success - despite a decline in sales

Other news are also positive for Apple. In addition to showing the satisfaction of AirPods users the current quarterly figures or forecasts that it is the company from Cupertino goes well. Although sales of the iPhone declined, more and more high-priced models of Apple smartphones were sold. Also and especially those iPhone 7 (PRODUCT) RED Special Edition would be well received by customers, said Tim Cook, Apple's CEO. The decline in iPhone sales is explained by the fact that everyone is looking forward to what is likely to come in September 2017 iPhone 8 lurk iPhone, iPad, AirPods - everything could be presented completely renewed in September; after all, the iPhone will be 10 years old. Great things are expected. But first comes the first Apple WWDC 2017 in June; even there there can be astonishing innovations. The share price will be happy;)

Do you have the wireless headphones in use?

Do you have a pair of Apple AirPods? Then feel free to write in a comment how you are satisfied with the Bluetooth headphones. How does the connection with iPhone and iPad work, what is the quality of music and telephony? I am looking forward to your opinions!