Apple ARKit: Possibilities for the construction industry and do-it-yourselfers 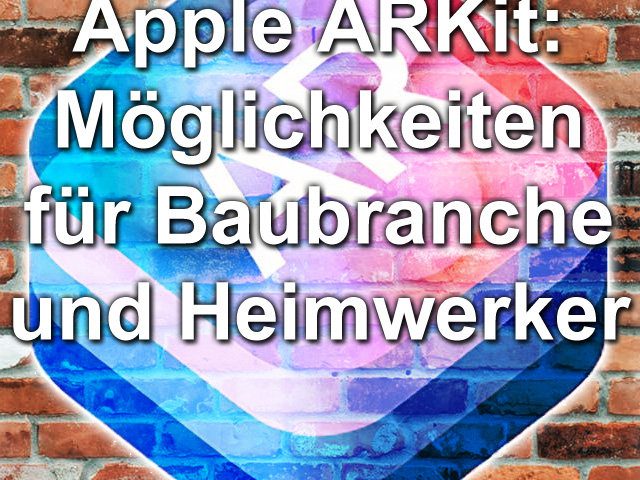 With the ARKit for mobile devices such as iPhone and iPad, Apple created an interface for augmented reality at WWDC 2017. With regard to the measurement of rooms and buildings, the visualization of real estate, furnishings and much more, there are many possibilities and opportunities. I have a first demo of the applications that are possible with the Apple ARKit in the Article introducing iOS 11 packed. It only makes sense that in addition to gamers, target groups such as the construction industry and do-it-yourselfers will benefit from it.

Measure houses and create construction plans or make 3D models from BIM (Building Information Modeling) accessible - this is possible with Apple iPhone or iPad and the ARKit for developers. In addition to the construction industry, do-it-yourselfers benefit from augmented reality.

Apple ARKit: Possibilities for the construction industry and do-it-yourselfers

Imagine that the property developer, architect, general contractor or broker guides you through the new property that has not yet been built. With an Apple iPad in hand, experts could clearly show their customers individually designed “model houses”. Adjustments can be made in real time and even incorporated into the construction plans in real time using BIM (Building Information Modeling).

Other apps and tools are of course interesting for existing buildings. For example the service Smart picture 3D. With this, photos of the rooms are digitally measured and 99% (manufacturer and media information) accurate building plans are created. You can find information about Smart Picture 3D on the official website. Using ARKit and smart algorithms, such services could enable surveying apps like Room Scan Pro displace those who “only” work with iPhone sensors.

This video shows how a room (e.g. a bathroom) can be measured with the camera of the Apple iPhone:

Measuring rooms, furniture and other things in particular ensures that they can be digitally changed and redesigned. So you can see whether you should buy the cabinet in white or brown and which tiles go best in the bathroom. In addition to IKEA (already announced), other outfitters and hardware stores will certainly use this opportunity to present themselves to customers at home. Do-it-yourselfers, however, can easily take measurements with the AR: