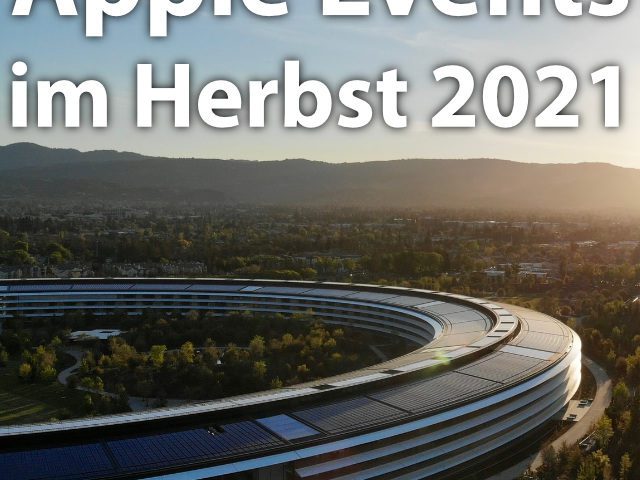 Autumn is approaching and with it the time of the new Apple releases. In the end we already met that Date of the iPhone Keynote 2021 dedicated. We have also listed which products we still expect this year. In addition to the iPhone 13 in its four versions from mini to Pro Max, there are two MacBook Pros, the Apple Watch 7, the 3rd generation AirPods, the iPad mini 6 and much more. Actually too much for just one Apple Special Event. So let's see what other dates there might be.

Due to the many new releases expected, Apple could spread its events again in autumn 2021. In addition to the iPhone 13 in September, there could be a Mac event in October and maybe a keynote in November. What do you think about that?

Let's assume that Apple has learned from the experiences of the pandemic year 2020, then the components and the production of the new iPhone were commissioned in good time this year. It can therefore be assumed that there will be a corresponding video transmission in September - possibly on Tuesday, September 14, 2021.

It is ruled out that there will be a live event in the Steve Jobs Theater in Apple Park that will take place in front of an audience. As part of the pre-produced presentation, the new Apple Watch and AirPods 13 could also be presented in addition to the iPhone 3. Functionally, these devices are a good match for each other as mobile devices.

The new models of the Apple MacBook Pro have been expected in this area for months. Those who finally want to use this with an Apple Silicon as SoC and a large screen could get the opportunity to do so from October. Then the laptops should come with M1X or M2 chips and mini LEDs in 14 or 16 inch displays.

There will also be a MacBook Air with Apple Silicon, a larger display and different housing colors, similar to the 24-inch iMac with an M1 chip. The iMac itself could also appear with a new chip, and also in a 27-inch version. It remains to be seen whether there will also be space for an iPad in addition to the three Macs. The event could rise on Tuesdays October 5, 12, 19 or 26, 2021.

In the introduction I already linked the list of expected devices for the rest of this year. The iPad mini 6 is also noted in it. In the last model of the iPad mini, i.e. in the 5th generation, only an A12 Bionic is installed as the SoC. In this regard and also with regard to other technology, this tablet variant from Cupertino could soon get an upgrade.

If that were the only remaining new release, Apple could limit itself to a press release here - as with the AirPods Pro in 2019 or iPad Pro in 2020. But maybe there is more to introduce: the long-awaited VR / AR headset, a HomePod with screen (as a competitor to the Amazon Echo Show) or a soundbar with built-in Apple TV. What do you think about it? Please leave a comment :)