Forgot your Apple ID password? How to remove the Apple ID anyway (sponsor) 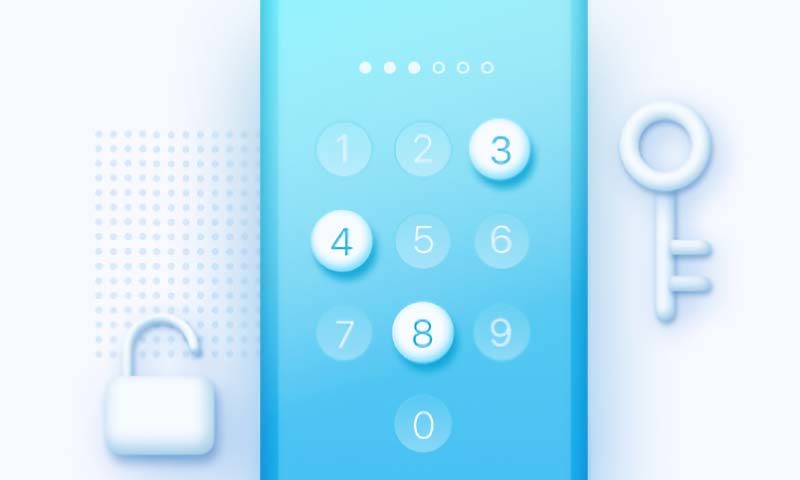 If you change the password of your Apple ID regularly, as is actually recommended, it happens every now and then that you mix up the new and old passwords and then sit in front of a locked iPhone and can no longer access them.

Also already happened: The kids play around on the iPhone, accidentally set a different password and no longer know what they took. After ten unsuccessful attempts, the iPhone will be locked and you can no longer get in.

Now there are several ways to get back the password of the Apple ID. We have summarized the most important steps in the article "Forgot iCloud or Apple ID password".

But if you can no longer reset it and Apple Support is also beating the sails, then you have no choice but to switch to a new Apple ID. And this is where the PassFab iPhone Unlocker software can help.

So that you can now remove the old Apple ID from the iPhone or iPad, you can access a software called "PassFab iPhone Unlocker" To fall back on. So that you can see how the procedure works, I will show you the process that you go through with the program below with individual screenshots. By the way, I didn't need the DFU mode. I used an old iPad Pro for my test, but it works the same with an iPhone.

The first step is to connect the iPhone to the Mac with a charging cable (ideally with the original Lightning cable from Apple). If the iOS device was connected to the Mac by cable for the first time, the iPhone or iPad will now ask you whether you want to trust the connected device. To do this, tap on "Trust" on the iPhone.

The procedure with PassFab iPhone Unlocker 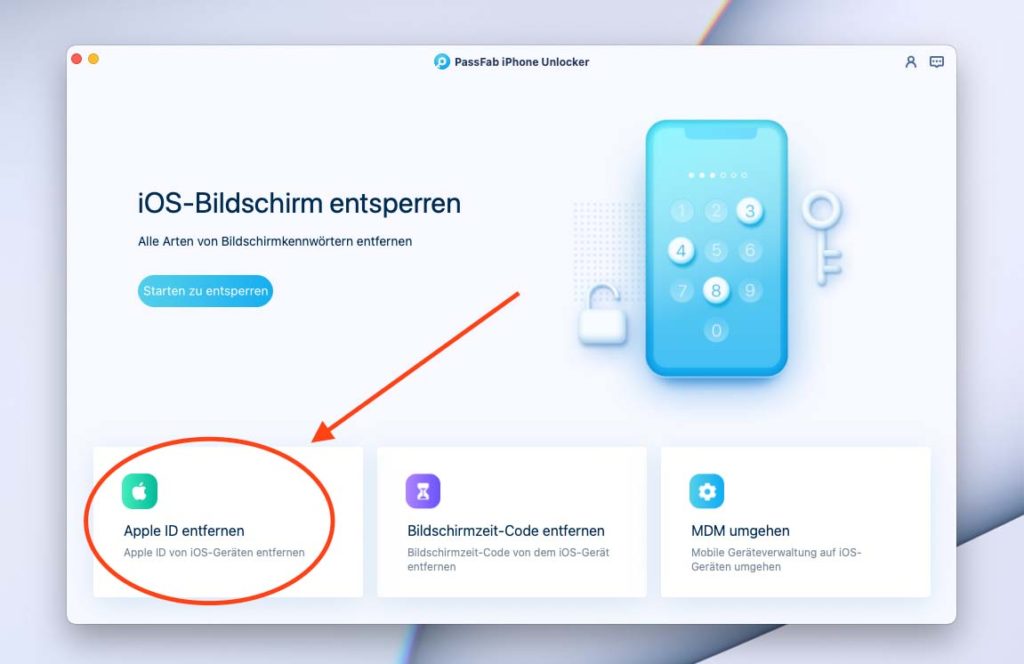 This is followed by a few intermediate screens, on which you confirm once again that you want to remove the Apple ID from the connected iPhone or iPad. You will also be asked whether you have activated a screen code and two-factor authentication on the device. Both of these seem important to using PassFab iPhone Unlocker.

In the following process, which can take a few minutes, the app will download the latest firmware for the iPhone or iPad, install it and then remove the Apple ID from the connected device. It is important here that you should never disconnect the Mac and iPhone.

After successful work, PassFab iPhone Unlocker should inform you that everything went well with the message "Apple ID was successfully removed".

The procedure with PassFab iPhone Unlocker in screenshots 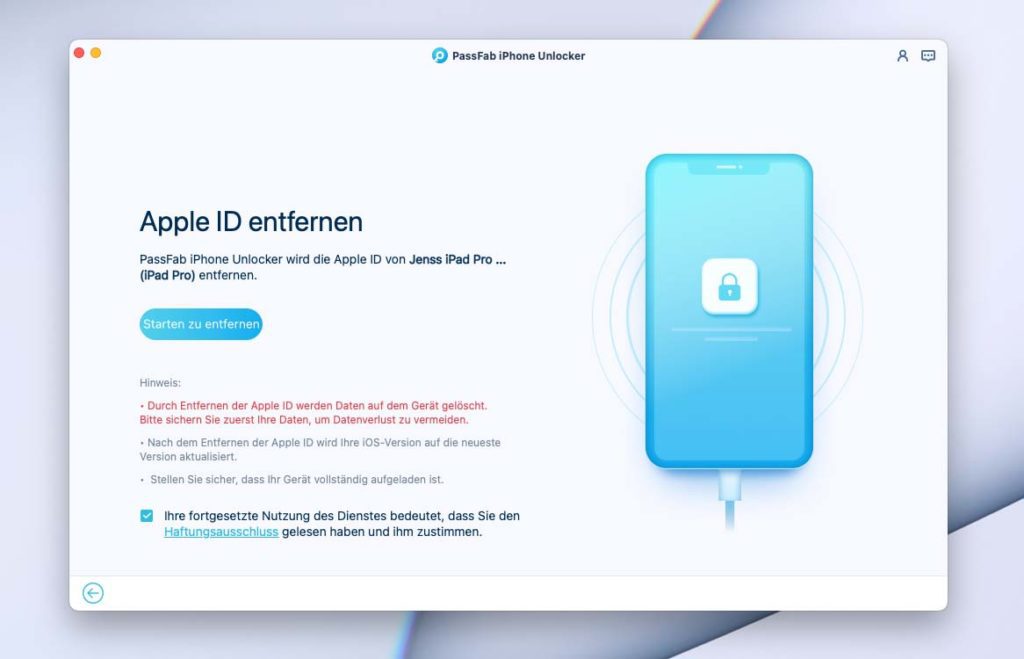 In the first step you have to confirm again that you actually want to remove the Apple ID from the device. 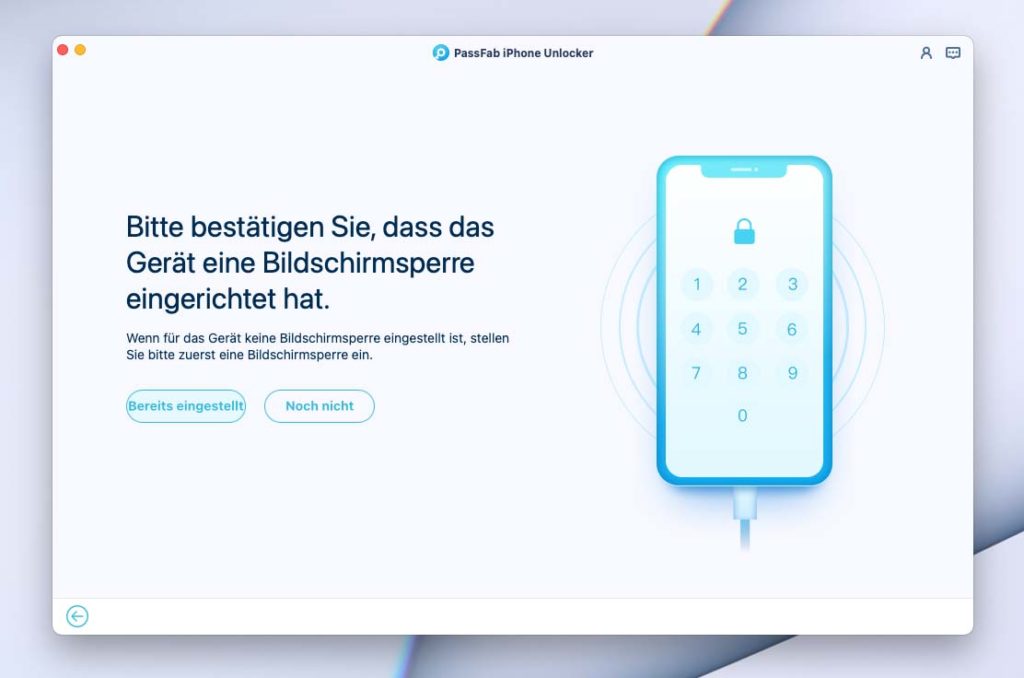 The software expects the iPhone or iPad to have a screen code ... this has to be confirmed in the process. 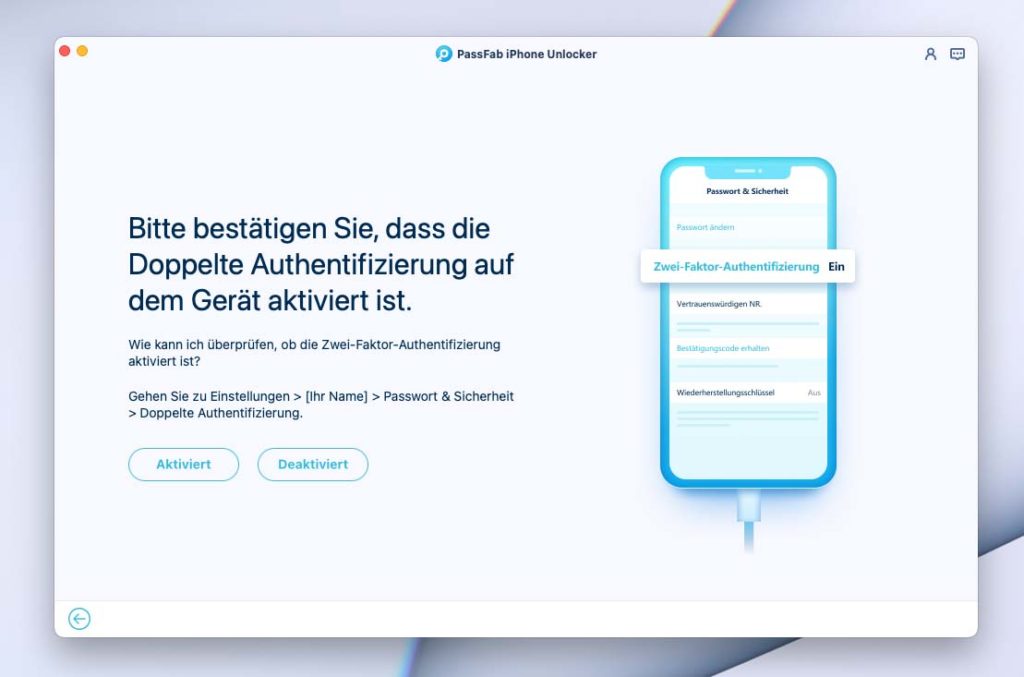 In the third step, you will be asked whether you have activated two-factor authentication for the Apple ID. 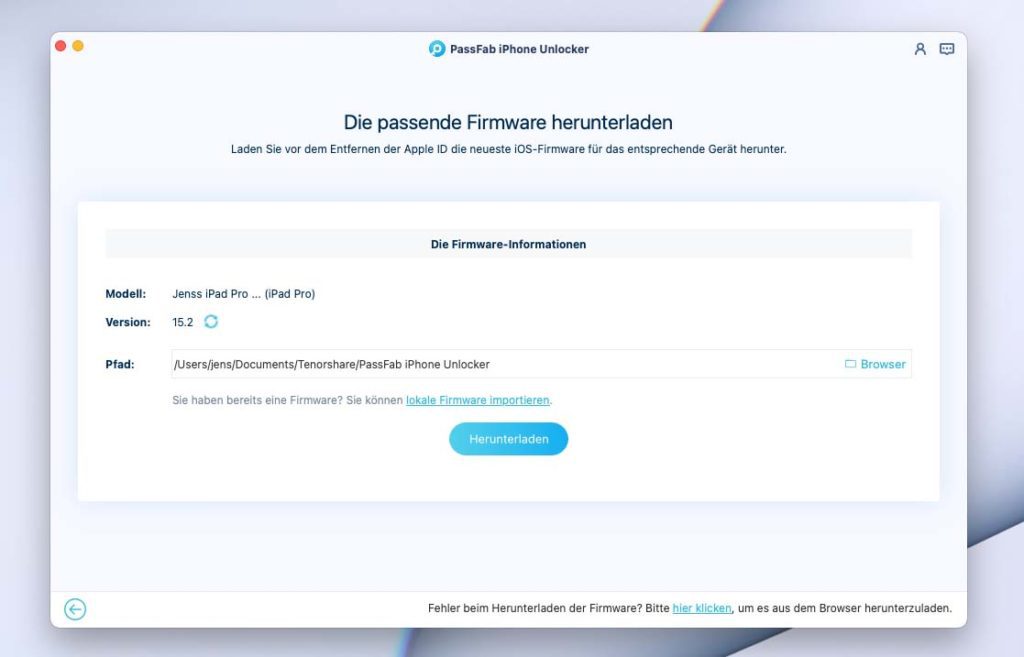 PassFab iPhone Unlocker will now download the latest firmware for the connected device. 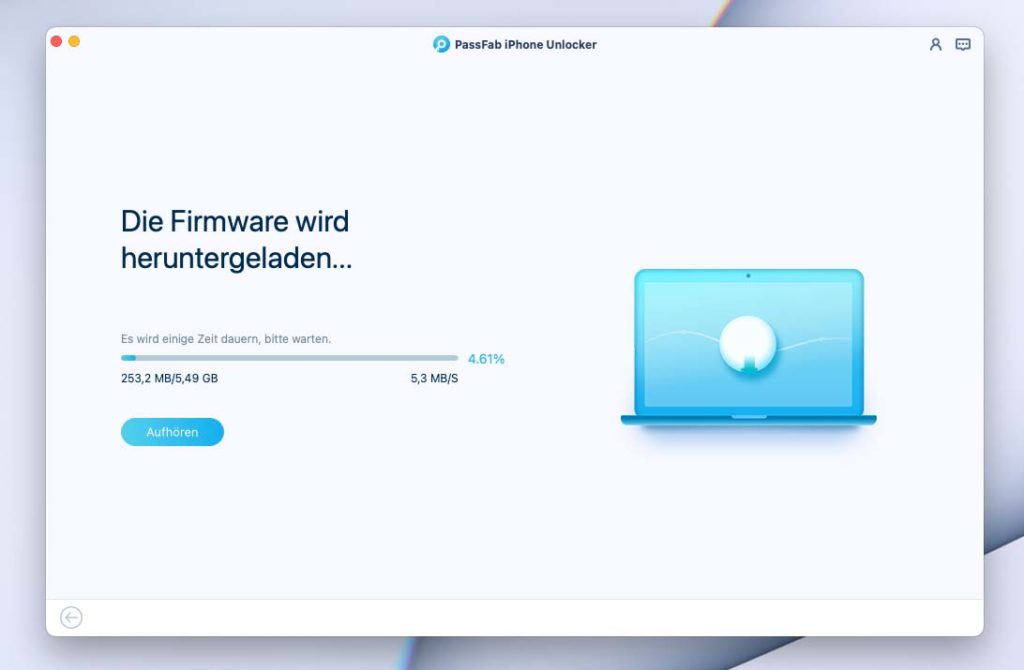 The download can take a few minutes because the firmware is usually several gigabytes in size. 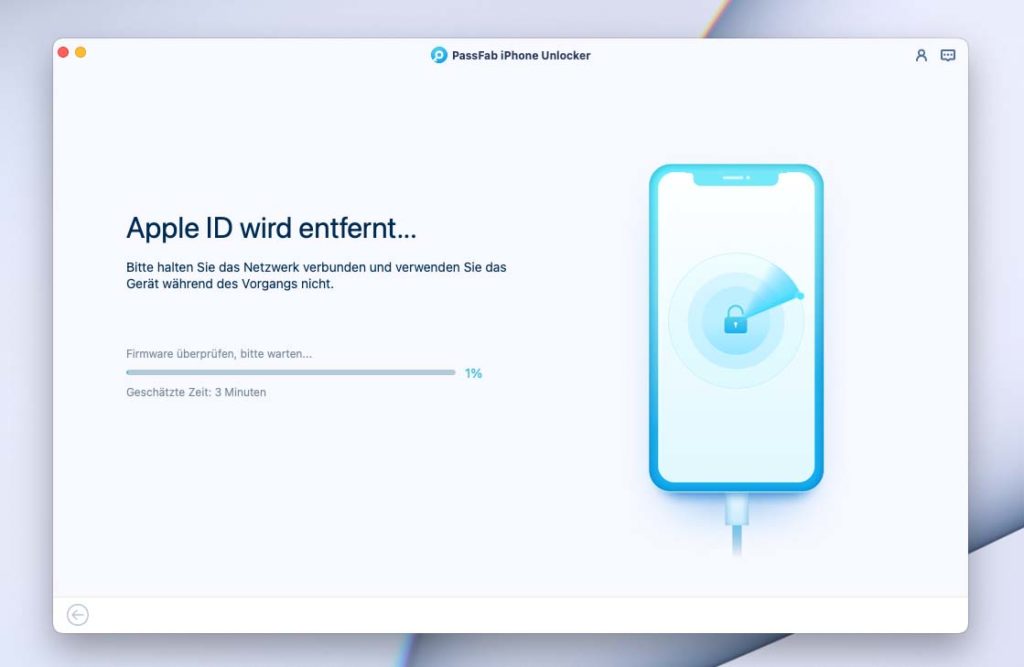 Now the actual process starts, in which the Apple ID is removed from the device. 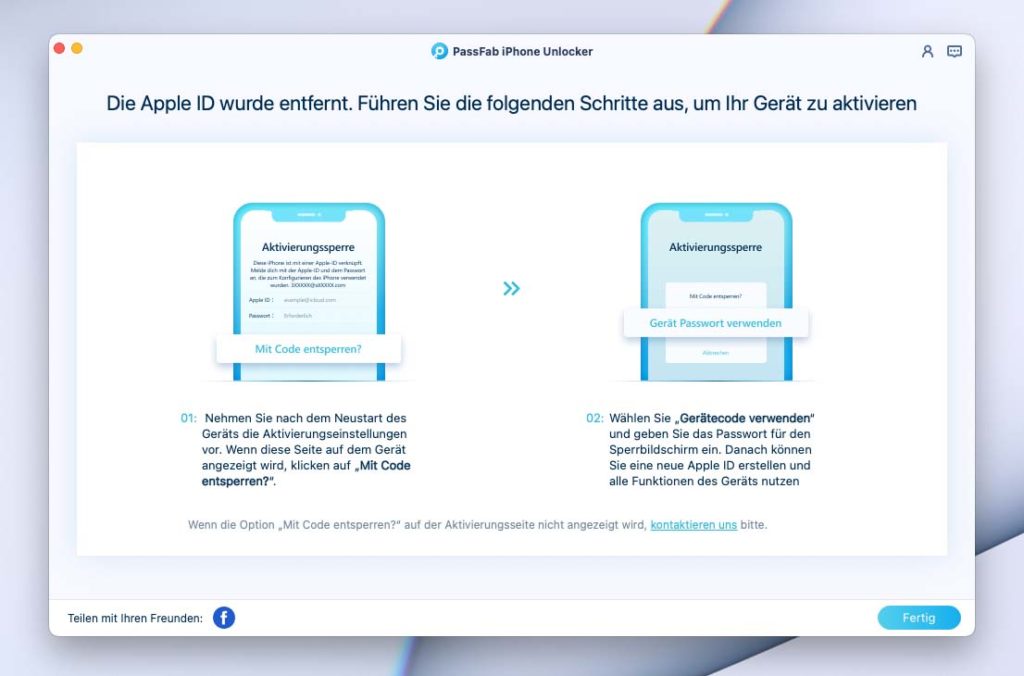 When you see this screen, the process is over and the iPad or iPhone should be waiting for you with the installation wizard. 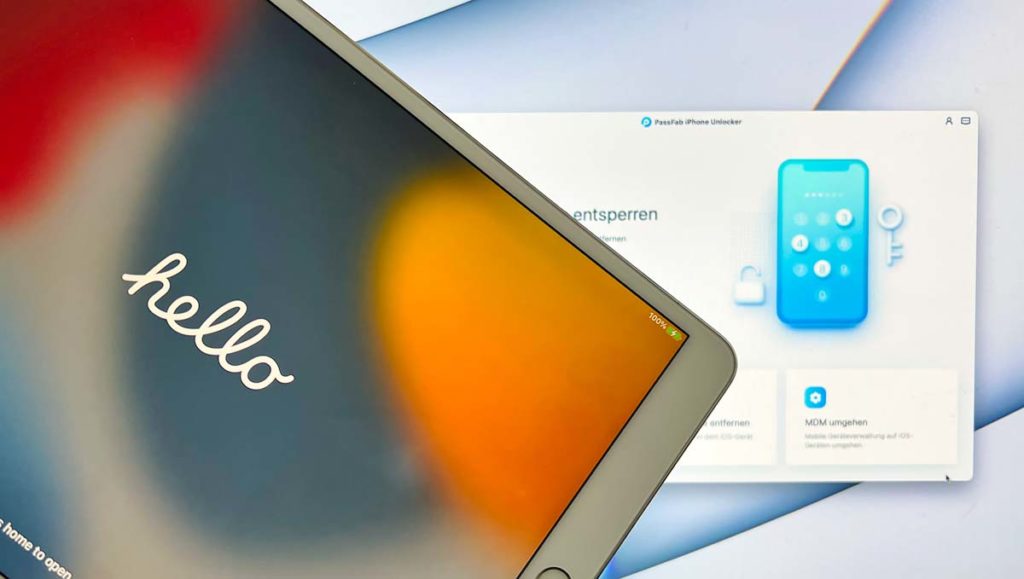 It looked like this for me after removing the Apple ID from the iPad using PassFab iPhone Unlocker.

Alternative: deleting the iPhone with the Apple Configurator 2

The Apple Configurator 2 is a little insider tip, which was recently discussed when some Macs no longer wanted to start after the update to Monterey. This software from Apple can not only bring Macs back to life, but also reset a locked iPhone.

To do this, you plug the iPhone into a Mac using the charging cable. The Apple Configurator 2 should run there.

So that you can now free the iPhone from the Apple ID, you log in under "Account" with your Apple ID and then select "Delete settings and content" under "Actions" → "Advanced". 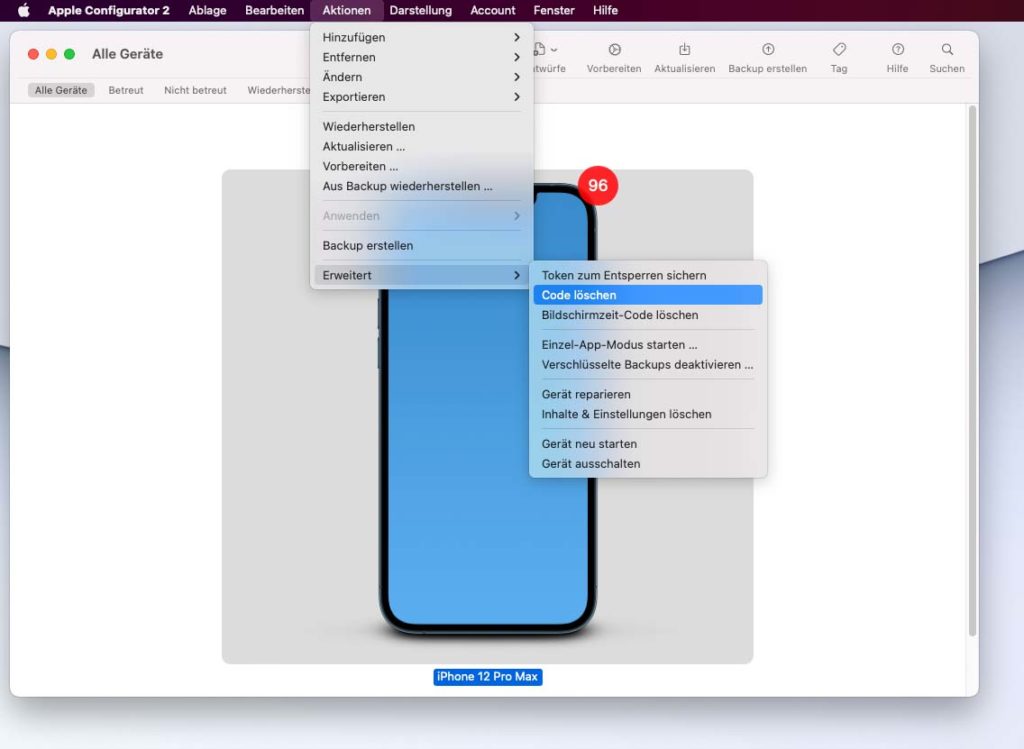 The Apple Configurator 2 offers a few options under "Actions" to handle a connected Apple device.

If the Apple Configurator 2 does not recognize the iPhone, it is usually due to the fact that you are not using an original Apple charging cable for the connection or that a hub or adapter is inserted between the Mac and iPhone.

An important note must still be given, as this often leads to misunderstandings. If you have deleted the Apple ID from an iPhone, it is still connected to this Apple ID in the “Where is?” Network. This means that the user who set up the iPad first is still stored as the "owner" with his Apple ID in the iCloud network.

If you set up the iPhone or iPad for the first time after removing the Apple ID, you will be informed that the owner of this device must approve it. The reason for this is that Apple wants to make the theft of the devices uninteresting. If you can still locate the device even after resetting it, it is not really safe for the thief to use. 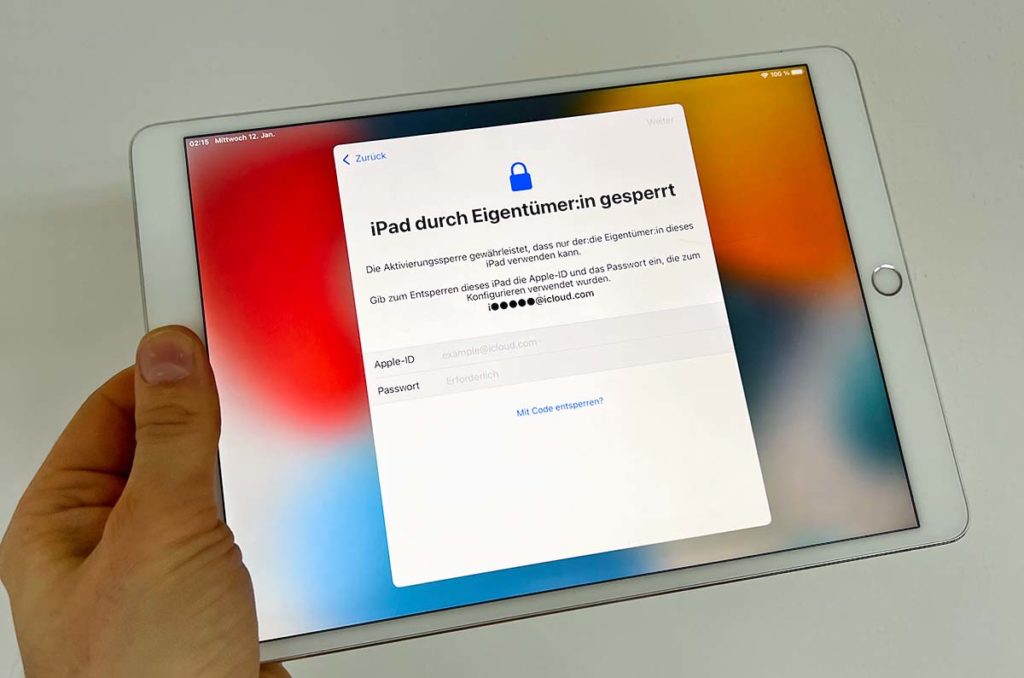 The activation lock prevents you from setting up the iPad or iPhone again after deleting the Apple ID.

As always, there are different ways to get there. In an emergency, you can easily reset an iPhone with the Apple Configurator 2.

However, the PassFab iPhone Unlocker software enables a nicer "user experience" because the app guides you through the process. Would you like a Unlock iPhone without the code to know, you are well served with the software from PassFab. You have to invest some money here, but with the PassFab iPhone Unlocker you will get the more comfortable solution.

Important note: Regardless of whether you use the Apple Configurator 2 or PassFab iPhone Unlocker: Neither of the two software solutions can release the device from the activation lock that Apple activates every time an iPhone or iPad is set up for the first time.