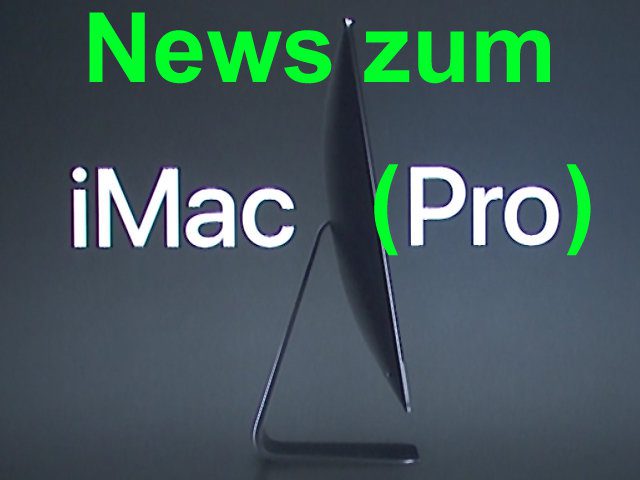 The day before yesterday, the Apple WWDC 2017 Keynote took place on the next MacOS High Sierra the new or revised models of iMac and Mac were presented. Also iOS 11 for iPhone and iPad as well as tvOS, watchOS, the Apple HomePod and many others became the topic. In this post I would like to briefly provide you with the information on the update of the Apple iMac give as well as an outlook on the new iMac Pro late 2017.

iMac and MacBook get macOS High Sierra, among other things the new file system APFS brings along. Here you get the further news about Apple iMac and Apple iMac Pro 2017.

The update for the iMac computers from Apple starts with the display and is therefore directly visible. The new displays are with their 500 nits (1 nt = 1 cd / m²) 43% brighter than previous iMac displays. They also have 10-bit dithering, which leads to a display of up to 1 billion colors. There is also an update in the graphics performance (see pictures).

Inside, a seventh generation Intel Core CPU comes into play. In professional circles this is also Kaby Lake called. The 7th generation Intel chip came onto the market in Q3 2016 and provides even more power and significantly higher turbo frequencies in the Apple iMac (in numbers: 4,2 to 4,5 GHz). Also there is one Update for the RAM with the iMac: the 21,5 inch model gets up to 32GB, the 27 inch model up to 64GB.

In addition, the memory is expanded and made faster. All 27 inchers should come along Fusion Drive come along and bring up to 50% faster SSD hard drives. Their storage in the Apple iMac 27 inch can be chosen up to 2TB! Connectivity is also expanded: USB-A comes twice USB-C or Thunderbolt 3 and even Ethernet for up to 10 GBit / s.

Virtual Reality on the iMac

With fast processors, decent RAM, extensive graphics processing and output, and the right software, the iMac is ideal for applications in the field of virtual reality. There was a demo of the possibilities at Apple WWDC 2017 Keynote by the software company Industrial Light & Magic:

Prices for the new iMac models

The development of a new, more efficient cooling system made it possible for Apple to put significantly more power into the housing of an iMac, as was learned at the Apple WWDC 2017 keynote. The iMac Pro in Space Gray, coming later this year, will have CPUs with 8, 10 or 18 cores; the GPU will be a Radeon Vega Graphics with 16 GB of VRAM. The SSD has 4TB with 3 GBit / s. There are 4 Thunderbolt ports, ethernet and more. The starting price: $ 4,999.