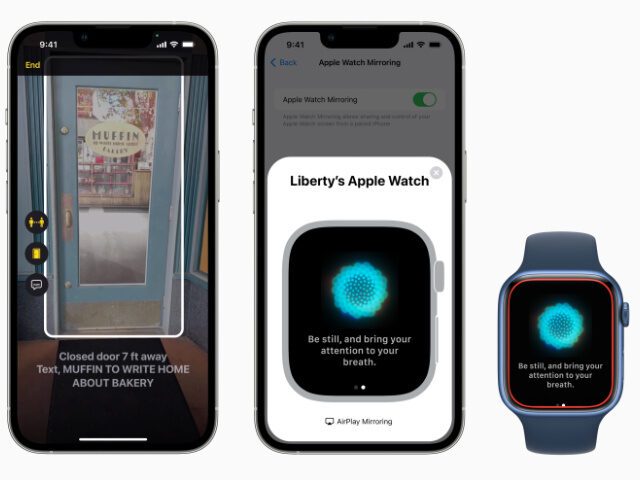 Before the WWDC22 and their keynote on June 6th Apple has introduced new features for iOS, iPadOS, macOS and watchOS that should benefit users with disabilities. It is a comprehensive catalog of functions, which includes e.g. B. heard the door recognition. Doors, their distance and their inscription can be recognized via the iPhone camera – for example to identify a shop and its opening times. Furthermore, the display of the Apple Watch can soon be transferred to the iPhone via AirPlay. The new accessibility features are scheduled to appear “this year”, i.e. probably in the fall with the release of the new operating system versions for iPhone, iPad, Mac and Apple Watch.

Apple introduced new accessibility features, features for people with disabilities, and special promotions and content for digital accessibility. In addition to door recognition and Apple Watch mirroring, you can find other examples here.

Door recognition for blind people and users with visual impairments

The "door recognition" feature is to be introduced on the iPhone as a new "magnifying glass" mode. The “People Recognition” and “Image Description” functions can be used simultaneously or separately. So if you use the Apple iPhone to better perceive your surroundings, you will get more practical tools for this over the course of the year. With regard to detected doors, it should even be possible to describe whether they are open or closed, whether they have to be pushed or pulled or whether there is a rotary knob / door handle. In addition to image recognition, spatial recognition of the environment also comes into play here, which is why the feature will only work on devices with a LiDAR scanner.

Apple Watch Mirroring: Control the smart watch via the iPhone

With "Apple Watch Mirroring" it is not only possible to show the display of the smartwatch on the display of the smartphone, but also to control it. In addition to the iPhone display, the device's buttons, voice control, various sound actions, external "Made for iPhone" help and more can still be used. With Apple Watch Mirroring, users with motor disabilities can use the Apple Watch more easily and access values ​​such as heart rate, blood oxygen, ECG and the like. There will also be so-called “Quick Actions” for the watch itself, which are based on AssistiveTouch technology and are intended to make it easier to control the device.

Live subtitles of spoken content on iPhone, iPad and Mac

Hard of hearing and deafness more or less rule out some use cases of the iPhone. Watching videos on YouTube or social media, attending video conferences and the like are all part of it. A FaceTime phone call is used by Apple as an example to introduce the "Live Captions" feature. This recognizes spoken content and immediately shows it as writing on the display. The font size can be adjusted for better legibility. Live subtitles will not only appear as a feature for the iPhone and iPad in the course of the year, but also for the Mac.

More features and enhancements for better use of Apple devices

The official press release on the subject Apple lists other new features or improvements to existing features. Here is the list as you can find it in the linked source:

"This week, Apple celebrates the Global Day of Action for Digital Accessibility", says the press release linked above. In addition to the features listed above that will be available now or later this year, there are other promotions as well. For example, there are various events organized by Apple, as well as collections of digital content. From May 19, some countries will have e.g. B. "SignTime" for Apple support in sign language. Furthermore, the operating aids will be presented in special sessions in Apple Stores worldwide. Digital offerings include Shortcuts, Apple Fitness+, Apple Maps, App Store, Apple Music, Apple TV and more.