Apple iPhone 13: Rumors that will probably not come true 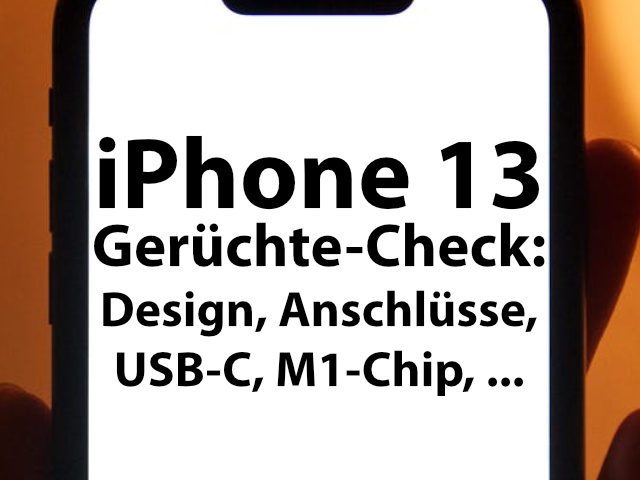 The Apple September keynote is getting closer and in addition to the previous, rather moderate rumors, a few rather improbable rumors are bubbling up again in the cauldrons of the rumor mill. A few of them can probably be invalidated directly. Therefore, in the following, we will take a look at which rumors about the Apple iPhone 13 will not come true at the next "Special Event" of the technology giant from Cupertino. What do you think about the individual points? Feel free to leave a comment on the topic;)

Here you can find the rumor check for the Apple iPhone 13 before the manufacturer's big September keynote. What about the redesign, the elimination of Lightning and the installation of the M1 chip in the smartphone?

To be honest, I'm a little unsure whether I'll get the iPhone 13. On the one hand, my iPhone 12 Pro Max is more than sufficient and, on the other hand, the iPhone 13 is supposed to set a new record in "the most expensive smartphone". If the camera wasn't a huge improvement iPhone 12 Pro promises, then I will probably stick with it.

A completely new design for the iPhone 13

The upcoming Apple smartphones are supposed to get a narrower notchso that less area is covered at the top of the display. In addition, larger camera lenses are expected on the back of the device. There will most likely not be any further and, above all, major changes to the design. It is much more assumed that the iPhone 13 and iPhone 12 will be very similar except for the points mentioned. You can also completely rule out Apple introducing a hole-punch camera or corresponding sensors for Face ID.

Touch ID of the iPhone 13 hidden in the display

The 13 series is now the second pandemic generation of Apple smartphones. No wonder that rumors of the return of Touch ID persist - it would be a quick alternative to Face ID, which is rather impractical due to masks. There are supposed to have been tests for Touch ID in the iPhone 13, but apparently the desired quality could not be achieved. So you have to be satisfied with the new cell phones from Cupertino with Face ID or entering the unlock code; especially when you have mouth and nose protection on your face.

An iPhone without any connections

The headphone connection has long been history. With the wireless Qi charging function and MagSafe, however, Apple has sparked rumors that revolve around the complete elimination of physical interfaces. But will Apple say goodbye to the Lightning connector in 2021 and present a smooth surface between the microphone and speaker holes on the underside of the smartphone? Rather not. It could be that this design decision will be offered with the iPhone 14 Pro from 2022, but it will not be so far this year.

USB-C connection instead of Lightning or nothing

Another idea, which revolves around the physical connection of the iPhone and has a disappearance of the Lightning port, is hidden in rumors about USB-C compatibility. Now that MacBook models and the iPad Pro have been equipped with USB-C or Thunderbolt 3, there are repeated reports that this should also happen with the iPhone. This would meet the corresponding requirements of the EU, which calls for a uniform plug for smartphones from different manufacturers. But it is also to be expected that Apple will completely decide against any connection before equipping the iPhone with USB-C. In short: the iPhone 13 will probably come with Lightning.

The iPhone has its own series of chips, the current representative of which is the A14 Bionic. Now that the first Mac models as well as the first iPad Pro with the M1 chip, ie the new “Apple Silicon”, came out, there are also some rumors about the adaptation in the smartphone area. It is more likely, however, that Apple will install an A15 Bionic, which shows an increase in performance by means of finer technology (5nm or 3nm architecture). The M1 or an M1X or M2 chip will then be more likely to be found in the coming Mac models.

More articles on the topic