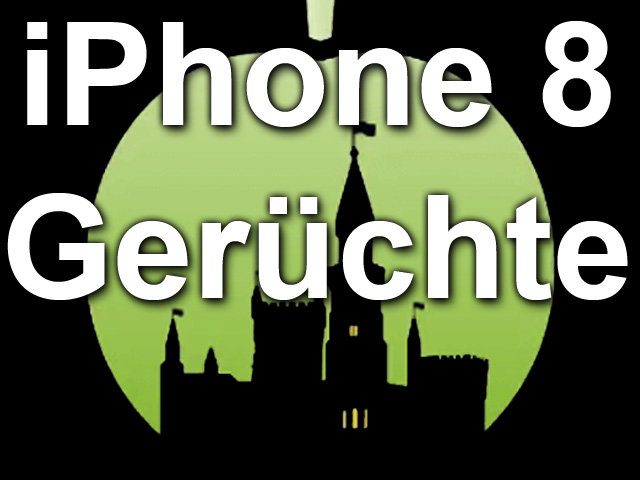 The iPhone 8 will be presented soon, even if we don't know exactly when it will be Date for the Apple September Keynote 2017 will be. But before we get any certainty, I would like to summarize the iPhone 8 rumors about the new iPhone and the new iPhones. As a possible date that has Wall Street Journal last the 12 September 2017 thrown into the room. In addition, it has already been indicated that the event will take place in Steve Jobs Theater on the new Apple campus or in the Apple Park to be held.

Update 13.09.2017/XNUMX/XNUMX: The Apple SeptemberKeynote 2017 is over and some iPhone 8, iPhone X and Apple Watch Series 3 rumors have been confirmed, some not. If you want to read all the contents of the event, then I recommend mine Summary of the Apple iPhone Keynote 2017 <- click, click, click!

A quick note at the beginning: of course, the following are only rumours, speculation and apparent leaks. Nothing can really be considered fact yet. What the iPhone 8 (Plus) and the iPhone 7s models, if they will be, will look like and what technical data they will have, we will only know after the autumn keynote in Cupertino ;)

The display: Much hustle and bustle about nothing?

What have we not speculated about the display of the new iPhone 2016, or iPhone 8 as it might be called due to the anniversary (the first iPhone came out in 10) since the end of 2007 ... Im November 2016 Apple was granted new patents that could enable a curved or even flexible display. And before that there was already a lot of speculation about whether it might not be a hybrid device whose display could be folded out so that the iPhone can be turned into a small iPad in just a few simple steps - here is the article about the foldable smartphone. But none of that seems to be true in 2017. The display should just get bigger and get new features in addition to 3D Touch etc.

Touch ID and home button on the screen

The display of the new iPhone should also swallow an important feature of the Apple smartphone: the home button. Its position and size could be individually adjusted under iOS 11. This makes usability even better and it can also have advantages for one-handed operation of the iPhone 8. Other buttons should still be found on the side of the device. In addition, the Touch ID, i.e. the recognition of the fingerprint, could be built into the display. However, there are also sources and leaks that indicate that the fingerprint sensor on the iPhone 8 / iPhone 10 will be on the back - like these pictures from Baidu.

Face recognition as a substitute for the fingerprint

To unlock the device and to identify the user for Apple Pay and the like, face recognition will also be used on the new Apple smartphone, which is expected to be presented on September 12, 2017 in the Steve Jobs Theater in Apple Park. With current pictures and videos of models of the new iPhone (which summarize rumors and not yet facts) you can see a corresponding number of cameras on the front of the smartphone. These could also play a role in the incorporation of virtual reality and Augmented reality in iOS 11 .

I have the following pictures with T-Online and YouTube found. The original sources are indicated on the collage or with the sources (see links):

iPhone 8 rumors, fantasies and media reports for clicks always contain pictures - like these, which can only be confirmed or denied by Apple after the autumn keynote. (Click to enlarge)

iPhone 8 with laser for autofocus and AR?

The magazine reported in July Fast Company from a 3D laser that Apple could build into the new iPhone - on the back, to the autofocus of the two cameras (this time one on top of the other instead of next to each other arranged) as well as augmented reality (AR). It is possible that the round recess on the back in the Baidu pictures is not the space for the fingerprint sensor after all. But maybe it is, and the laser is close to the camera. We will only have certainty about the rumors after the upcoming September keynote;)

When will the iPhone 8 be out, many are wondering. Well, the keynote for the official launch will most likely take place on Tuesday, September 12, 2017. If in doubt, a day after. The device could then go on sale on the 22nd or 25th of the month. In other words: At the end of the coming month or at the latest at the beginning of October you will find the new iPhone models in the Apple Store, in various online shops, at Telekom, Vodafone and Co. as well as at the other usual sales outlets. Then you can buy the new iPhone or order it online.

In addition to the frequently asked question “When will the iPhone 8 be out?” Or “When will the iPhone 8 be available on the market?”, There are also speculations and rumors about the price or the prices of the individual versions. Because next to the standard model it will definitely be one again 8 iPhone Plus give. In addition, in addition to the 8, there is also a iPhone 7s and an iPhone 7s Plus could be imagined. According to C-Net the price of the new Apple smartphones is said to be between $ 999 and $ 1.200. The numbers can certainly also be transferred to between € 999 and € 1.200. The parts are by no means cheap.

Also at C-Net you can read a few more details about the technical equipment, the possible features and other data. I would like to list these together with the rumors mentioned above in the running text:

Other devices and systems at the keynote

The Apple smartphone will be the biggest and most noticed factor at the upcoming autumn keynote, but it will certainly not be the only one. Because it is possible that there is also a Apple Watch Series 3 will give. You can find information about the Apple Watch Series 2 here . There could be a new one for that Watch 4 give. For iPhone and iPad is also iOS 11 rolled out with new functions. The features have already been presented for the iPad - see here. Also could be a new or pimped one iPad are in themselves on the list. Then there is the Apple iMac Proat WWDC 2017 has already been teased. Not to forget the Mac operating system macOS 10.13 High Sierra. So there is a lot that we can look forward to with great excitement.