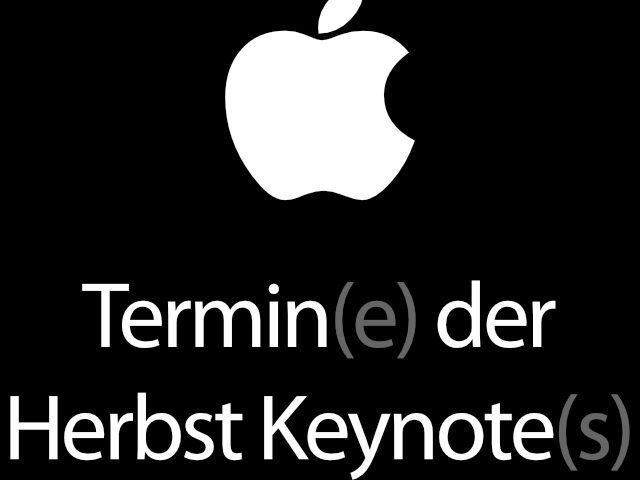 The Apple September 2022 event, which is set to unveil the new iPhone 14 and new Apple Watch Series 8, could be complemented by another keynote in October 2022. New Mac and iPad models will then probably be shown. The Apple AirPods Pro 2 are also scheduled to be launched this year, but whether they will be presented in September or October is still pending. Apple's Mixed Reality Headset for VR and AR applications could also be shown for the first time. However, it may not be presented until the beginning of 2023 – the rumor mill is at odds here. More details, rumors and in-depth posts on the subject can be found below.

Note: This post has been around for several years and will be updated from time to time before Apple's fall keynotes.

macOS is coming and iPadOS 16 only in October? Here you will find the latest information." width="1024″ height="484″ /> When will the Apple September Keynote 2022 take place? When will the iPhone 14 be presented and what else will be presented? And are there new Mac models, new iPads and macOS Ventura and iPadOS 16 only in October? Find the latest information here.

Apple has a lot planned for autumn 2022, at least if you believe all the rumors about the upcoming events. Because next to the traditional iPhone event in September - probably on 07.09.2022/XNUMX/XNUMX, as stated in a Entry at MacRumors means – there should also be an October event again. Similar to last year, the iPhone and the Apple Watch as well as iPads and Macs are to be presented separately.

Also, new AirPods Pro are rumored to be launched. Furthermore, Apple will certainly comment on its services (Apple tv+, Fitness+, Music, iCloud, etc.). In my post Apple September keynote: What can we expect next month? you will find details on these points:

As part of the Apple September Keynote 2021, four models of the iPhone 13, the Apple Watch Series 7 and the 9th generation iPad, the 6th generation iPad mini and information on Apple services were presented. All details about the event, which was again pre-recorded for pandemic reasons, can be found here: Apple September Keynote 2021 - iPhone 13, Apple Watch Series 7 & new iPad models.

Incidentally, the Apple iPhone event 2021 was supplemented by an October event to present the AirPods 3, the HomePop mini in new colors, the M1 Pro and Max M1, as well as the MacBook Pro models equipped with it. It was also about the new Apple Music subscription, which can only be used by voice input, but is very cheap. All information is available here: Apple October Event 2021 - AirPods 3, MacBook Pro and somehow HomePod mini.

Update: Apple's fall events are now behind us. Due to the global Covid-19 pandemic, the product presentations did not take place live, but as streams of pre-produced recordings. In addition, there was not just one event, but two. Here are the summaries:

Update: The summary of the iPhone 11 event can be found with this link.

Update 23.02.2019: Of course, this keynote is long gone and you will find a number of messages about the presented products here in the blog (see below). Why is the update coming so late? Well there is so much to do ...: D

Here are the contributions to the event around iPhone XR, iPhone XS, iPhone XS Max and Apple Watch 4:

The next Apple event will be the September 2018 keynote, again taking place at the Steve Jobs Theater. Even 20 years after the presentation of the iMac, we can certainly look forward to new iPhone models on September 12, 2018, but rumor has it that there will also be an anniversary model of the desktop computer. Also maybe about a new 13-inch MacBook, a new version of the Mac mini and the iPhone SE2 or iPhone XS and / or iPhone 9. Here are the hottest rumors about the products of the Apple September Keynote 2018:

The Apple September Keynote 2017 was obviously about the legacy of Steve Jobs, which the technology giant from Cupertino is held up. At the beginning there was also a small image film in which Steve Jobs Theater im Apple Park was presented - with the voice of the Apple founder in the background. Even after the official opening by Tim Cook, there were still a few words about the great visionary, whose phone has now been developed further for 10 years. A complete recap of the Apple September 2017 event you can find here.

Contents and products in a nutshell

Worth reading: Information on Apple WWDC

Overview of the iPhone event 2016

Apple's September 2016 event was not only about devices, but also about updates for Apple systems and apps. The big eye-catcher was of course Super Mario Run as iOS App. There was also iWork an Apple innovation for online co-working. After that it was Watch 3 for the Apple Watch - of course with the extension of Pokémon Go. Then came the fitting Apple Watch Series 2. The segment then closes towards the iPhone 7 iOS 10 guided. And after the iPhone 7 and the 7 iPhone Plus came the Apple AirPods. If you want more information and data on everything, then either have a look this summary or watch the following video:

The Apple September 2015 event gave us the following, among other things iPhone 6s and I baked the 6s iPhone Plus brought. But not only that. The other products and systems included the Apple Watch, which was introduced earlier this year and for which there were already some innovations in September. The first generation of the iPad Pro with a 12,9 inch screen diagonal. The latest version has been available since June 2017 with 10,5 inches. Another very important novelty was that Apple Pencil. On top of that came that iPad mini 4, Innovations in the Touch ID of mobile devices and of course finally the new iPhones.

Here are a few articles about the novelties at the time:

Here is the Apple September Keynote 2015 as a video: