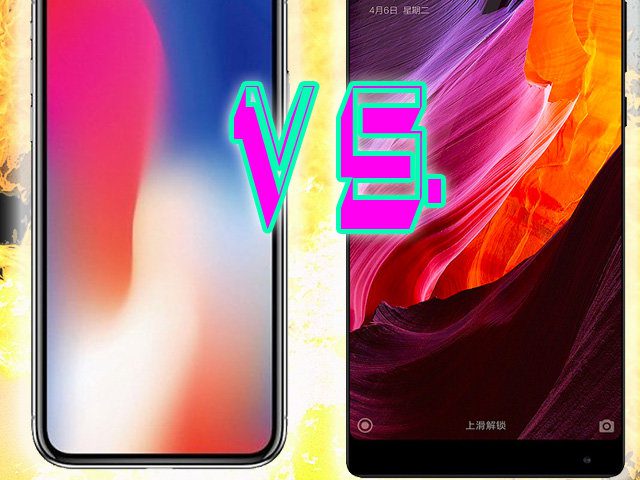 With the iPhone X Apple released a new premium smartphone at the September 2017 keynote that sets standards in many ways. The new Apple smartphone, which was released for the anniversary of the device series and in honor of Steve Jobs, is not the only technically very well-equipped smartphone. In addition, the frameless display or the rounded corners were not invented with the iPhone X either. So here's one Comparison of Apple iPhone X and Xiaomi Mi Mix 2. The Xiaomi Mi Mix 2 is also very well equipped - let's see what advantages and disadvantages it has.

The iPhone X and the Xiaomi Mi Mix 2 in comparison. Display, cameras and other technical details in the overview as well as assessments of iOS, Android and MIUI.
Images: Apple / Xiaomi

The comparison of the Apple iPhone X with the Xiaomi Mi Mix 2 is indeed a comparison of two devices marketed as smartphones or phablets, but it is a hint in advance that it is an unequal pair. While Xiaomi, like most smartphone manufacturers with Android systems, mostly builds on standard hardware and also elements used elsewhere, Apple mainly develops the chips (CPU, GPU, etc.) itself in order to make the corresponding device as efficient as to make possible. With regard to sober technical data, however, a comparison can be difficult.

If you look at the displays of the two devices, the first thing you notice is the black bar on the iPhone X, which breaks through the rounded finish of the screen. The 5,8 '' OLED display Although it brings the latest technologies, is colorful and has 3D Touch, the 5,99 '' display of the Xiaomi Mi Mix 2 is also strong in color and contrast. And that with an almost borderless spread, you can see from the bar below the display. The front camera is also hidden in this.

And that brings us to the next point of comparison: the cameras. With the Apple iPhone X, the front camera is traditionally placed in the top of the device. In addition, there are the various sensors and projectors for the use of Face ID and the new photo technology under iOS 11. The Xiaomi Mi Mix 2, on the other hand, "only" has a 5 megapixel camera at the bottom of the smartphone.

A comparison of important technical details

In order not to break down all the data and components in detail and to be able to offer a better overview, here is the comparison of the technical data of the Apple iPhone X and the Xiaomi Mi Mix 2 in a table. Are there still values ​​missing or do you have information on a certain point of comparison? Then leave a comment;)

Updates and security: iOS vs. Android

From Mac to iPod and iPad to iPhone, Apple Watch and Apple TV, Apple has always created its own operating systems. The good thing is that these systems are not only easy to use and very easy to understand, they also receive updates, upgrades and security patches quickly and easily. Vulnerabilities can be closed in days (or even hours) on all relevant devices. Although there are now also viruses, Trojans, ransomware and other threats to the Apple operating system, but also the corresponding detection and countermeasure software.

In contrast, there is Android and its modified version of Xiaomi called MIUI. If there is a security breach in Android, Google first has to create a patch, forward it to the manufacturers, who then adapt it to their system, and they may then have to pass on their versions to the network operators, who sometimes also have to make adjustments. This means that patches as well as updates and upgrades are on the way for some time until users can benefit from them. Weeks or even months can pass. Above all, upgrades are distributed regularly at a snail's pace.

Exception: Pure Android (not with Xiaomi)

In order to quickly break a little lance for Android devices: Nokia and Motorola are now endeavoring to enable security updates, general updates and upgrades to completely new Android versions more quickly. For this purpose, a “pure Android” was installed on the appropriate devices, as is the case among other things The World lists. Pure Android is currently more for people who know their way around and want to have more security on the Android smartphone and less in focus for the average consumer. The fact that the performance, content, performance and security of iOS will ever reach, but that is probably also in the future to be doubted ...

Presentation of the Apple iPhone X in the video

Presentation of the Xiaomi Mi Mix 2 in hands-on

Of course, you can't compare Apple with pears, and that's why everyone can form their own opinion about the two devices. But if I have forgotten something very important, if you have any questions or suggestions, please leave a corresponding comment;)