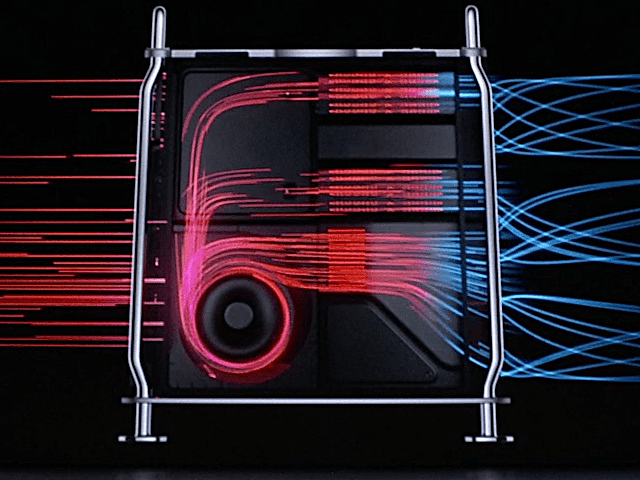 At yesterday's Apple WWDC 2019 Keynote, the kick-off event to this year's World Wide Developers Conference in San Jose, the new Apple Mac Pro presented. The new Mac Pro is a beast of computers designed for professional music, film and 3D productions. Depending on the configuration, the high-end Mac has up to 28 cores in the 4,4 GHz CPU, up to 1,5 TB RAM memory, an SSD with up to 4 TB storage, an "Afterburner" for ProRes and ProRes RAW Projects as well as other impressive values ​​and components. Information and pictures of the new Mac Pro 2019 as well as technical data and accessories can be found below.

The new Apple Mac Pro, which was introduced at the WWDC 2019 keynote. In addition to the new high-end computer, there is also a new display with XDR technology.

It's not that Apple is now suddenly deviating from its proprietary systems. Rather, an adaptable Mac is offered, which can be expanded and improved with modules specially created by hardware partners. Apple has not yet revealed how the prices for well-equipped or very well-equipped versions are. There was only one price for equipment from the lower range: 5.999 US dollars.

There is also a specially developed and designed display that not only offers HDR features on a 6K retina panel, but also XDR, which should be even better. The display is available for $ 4.999 with a normal anti-glare screen; and for $ 5.999 with a nano-matt screen. This can be aligned “floating” on the so-called Pro Stand and used in portrait format.

Fun Fact: A negatively surprised murmur went through the live audience when it was shown at the WWDC 2019 keynote that the sophisticated stand for the "Pro Display XDR" had to be purchased individually. And for a proud price of $ 999. In my opinion, there was rightly no positive reaction.

The new high-end Mac can be adapted with regard to different components and service providers. In the following I give you the most important technical data for an overview. You can find a complete overview of the upcoming hardware in the heatsink housing (see below) on the US side of Apple. On the German website, the predecessor is still advertised in the “Mac Pro” tab.

Well-known partners have agreed to support hardware and systems.

The cooling - housing, three fans and a blower

Instead of big coolers and own Fans The high-performance components of the Apple Mac Pro 2019 have a special housing design and sophisticated ventilation. The mesh-like design of the case serves as a heatsink and should be able to dissipate heat efficiently. In addition, there are three fans on the front of the Mac Pro 2019 that draw cool ambient air into the device. A fan inside also directs the warm air out to the rear. The computer should be free, especially under heavy load. However, as was already announced during yesterday's keynote, there will also be a rack version for data centers and servers.

According to yesterday's statements, the Apple Pro Display XDR is the fulfillment of all the wishes that professional users have when it comes to monitors. A Sony $ 43.000 screen was listed as an example of a good, true color monitor. It does have 10-bit colors on a 27-inch display and, in addition to HDR, also offers precise calibration. But it is not made for resolutions above 4K, has no retina pixel density, no functional design and is also not particularly quiet. The advantages of the screen should be found with the solutions for its disadvantages in the new Apple monitor.

The Pro Display XDR with Pro Stand as a separate, expensive accessory.

Keep the above "negative examples" for specs of a professional monitor in mind. You can use it to compare the following data from the Apple Pro Display XDR data sheet. You can find the complete overview of all data as well as further pictures on the Apple's US website. The device is not yet advertised on the German website, but rather the LG UltraFine 4K display.

The structure of the display. At the very back, blue LEDs ensure the brightness.

Interestingly, this monitor is cheaper to screw to the wall than to stand on a desk. Because the "Pro Stand", which is intended for the latter, has such a sophisticated technology for setting up and aligning that it costs $ 999 straight away. Sure, there will definitely be buyers for it. But Apple has not done itself an all-too-big favor with it, even if, in addition to the horizontal mode, it has a vertical mode for portraits, writing code and the like. The "VESA Mount Adapter" for mounting on the wall (or a self-made stand) is much cheaper and costs "only" 199 $. You can find both accessory products on the English-language page linked above.

What does the best Mac Pro (self-configured) cost?

If you go to the Apple Store on the Internet for fun and put together the most powerful machine, then average consumers will certainly have doubts about the price and who should be able to afford it. But the most powerfully equipped Apple Mac Pro models are not intended as living room computers, but rather as power machines for the workplace in the creative industry, which at best throw away the necessary change. So where the standard equipment costs € 6.499,00, you can add a little something.

But let's take the whole package. Then we pack the rollers instead of the stainless steel feet, add some accessories such as a mouse and a trackpad - and pack too Final Cut Pro and Logic Pro as a software package. We are already at € 59,917,98. A power cord and a keyboard are already included in the scope of delivery, so it works: D (prices as of 23.03.2021).

Update 2021: Apple Mac Pro as an alternative to iMac Pro

Now it's March 2021 and the end for the iMac Pro it was decided. It is no longer available in the official Apple online shop. Previously, only stocks were sold. So if you need Pro equipment for photo and video editing, for special effects, for music production, for programming apps, games, etc., as well as for other complex digital tasks, you can and should use the Mac Pro. Because even two years later, the Apple Mac Pro from 2019 still has enough power to handle computationally intensive tasks quickly and safely - you can set the individual configuration in the Apple Store (e.g. online).

When will the Apple Mac Pro come with the “Apple Silicon” SoC?

Towards the end of 2020, Apple released the first computers with their own SoC. The “Apple Silicon” chip called M1 is currently in the Apple MacBook Pro 2020, Apple MacBook Air 2020 and Apple Mac Mini 2020. By 2022, however, the manufacturer wants to convert the entire Mac range to its own chips without Intel technology. This means that a completely new version of the Mac Pro will be launched either in 2021 or then in 2022. Provided, of course, that this is not also pulped after three years. Because the iMac Pro was only available for a comparatively short time. So it is currently exciting (as of March 23.03.2021, XNUMX).