Apple Magic Keyboard: will the keyboard come with Touch Bar for iMac and Mac Pro? 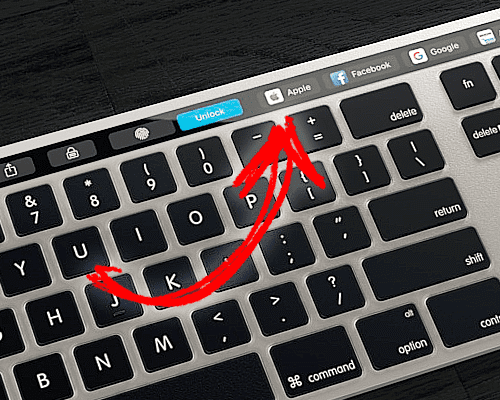 The Touch Bar on the new MacBook Pro from Apple inspires fans of the Cupertino manufacturer to believe that there is a Keyboard for iMac and Mac Pro including OLED strips will give. How about imgur and reddit If the widespread conceptual images of such a Magic Keyboard with a multifunctional touch bar show, such a product would do well in the Apple range. But what about the functionality?

The images of the external and wireless keyboard for iMac and Mac Pro were distributed via imgur and reddit, which, in addition to the conventional keys, also show a touch bar like the new MacBook. For the sake of completeness, you get that here reddit link, but it says that the pictures are no longer available. However, you can still find them under a link given on reddit; namely at imgur:

Functionality of a keyboard with a touch bar

The multi-functionality OLED strip is not a bad idea in itself. This could replace shortcuts, make functions easier to access and otherwise improve the workflow. But only if you are willing to look at the keyboard. From the point of view of a scribbler, I can say: I prefer to look at the monitor than at the keyboard when I'm working. But looking at the Touch Bar, if you want to use it, is also necessary with the MacBook Pro - and if you can get used to it there, you will also do the same with a Magic Keyboard. Here, trying is more than studying;)

A Apple Magic Keyboard with Touch Bar is conceivable and certainly an alternative for some user groups who prefer to use a stationary iMac or Mac Pro instead of the MacBook Pro. If you keep buttons in the same position, you can certainly call them up “blindly” at some point. If the overview varies, then you often see what your hands are doing. I am curious to see if a Mac keyboard with Touch Bar will become a reality!