A reader recently wrote to me about a problem with their Mac with Apple Mail. Well, now many will say: It is clear that you have problems when you use this mail client, but I also like to use it and can understand that you are reluctant to change programs here, just to get some problem out of the way to go.

In any case, my reader had tried to send some large audio files (> 50 MB) to friends via email. The files have arrived at the friends, but the mail program continues to report in the corner below:

The funny thing is that even a long wait won't bring any success here, but the files keep getting more and more. At some point it said "18 out of 20 emails are being sent ... 54,8 MB". 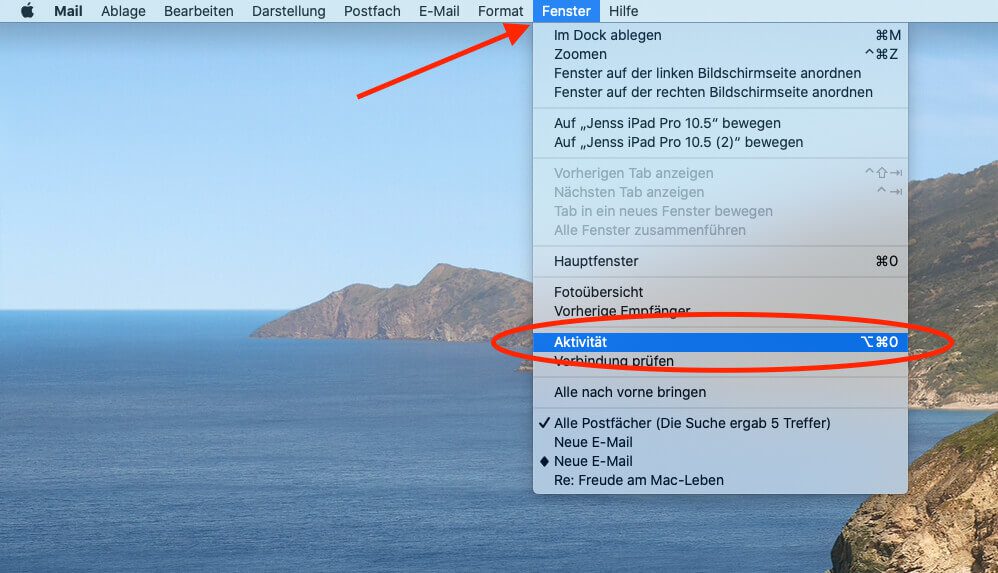 You can find out what Apple Mail is doing at the moment using the "Activity" menu item.

My first tip was to go to Activity from the Window menu in Apple Mail. A small window will appear in which you can see the current tasks of Apple Mail. As a rule, this list can also be used to completely remove the sending process if Apple Mail hangs. Unfortunately, this did not work for my reader. Although he saw the process in the list, it could not be deleted.

Mails that are listed in activity cannot always be deleted.

Second tip: look for the mails in the mail folder

My second idea was to look directly in the folder structure of Apple Mail to see if the mail files could not be deleted. To do this, open the library folder (explained here) and then switch to the "Mail" folder. The best case scenario is to make a copy of the mail folder beforehand by marking it and duplicating it with CMD + D.

In the mail folder in the folder "V7" (with macOS Catalina) there are all the mailboxes in which you can find the ".mbox" files that contain the mail data. You can look at the individual files with the space bar in Quicklook and possibly track down your unsent emails and drag them to the trash by hand. However, the mails were not found with my reader Wolfgang.

I was at the end of my game and had to pass. Something that I really hate to do.

PRAM reset does the job

A day later I got an email from Wolfgang that Apple Support could finally help him. He shut down his Mac and then restarted it while holding down the CMD + ALT + P + R keys. Some also know the keys as Command + Option + P + R.

When restarting the Mac you hold these keys down until it has done the "bling" a few times. Then you let go so that it can boot up normally. The whole thing is called "PRAM-Reset" (Photos: Sir Apfelot).

With this key combination you solve one PRAM reset, which I also explained here. After the restart, Mail was fully functional again and the strange message about the mails that would be sent was gone.

Sometimes there are completely unexpected solutions because I never thought that a PRAM reset could be related to an indication in Apple Mail, but it seems like it is. If you also have the problem with an "indelible" e-mail that gets stuck while sending, you can see whether one of the three approaches helps.

Update 15.05.2020/XNUMX/XNUMX: A reader just wrote me that rebuilding the mail index could also fix this problem. If you want to try it, you will find here are the appropriate instructions from me.