Apple Music: What is Dolby Atmos? 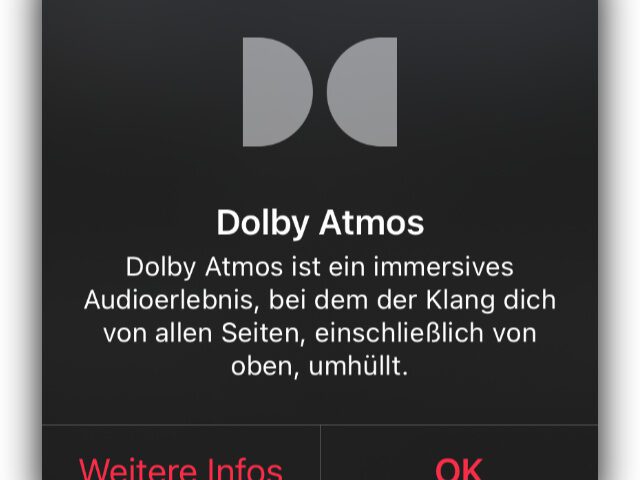 In the Apple Music app on the Mac, the iPhone, the iPad and other Apple devices, you have been able to find various symbols and terms in the view of albums and titles for some time, which are intended to describe the audio quality. In addition to Lossless, Hi-Res Lossless and Apple Digital Master are also included Dolby Atmos. But what is behind the symbol and the name "Dolby Atmos" in Apple Music? Here you get the answer, a short explanation on the topic and links for further reading.

What is Dolby Atmos in the Apple Music app?

If you tap on the symbol of this quality description under iOS or iPadOS, you will see a small explanatory text. In this it says: Dolby Atmos is an immersive audio experience where sound envelops you from all sides, including from above. The aim is to create a sound atmosphere that creates a spatial listening experience. This is only possible on the iPhone or iPad if you hold the device properly in front of you, but it works better when using compatible headphones. If this sounds familiar to you, then the procedure is perhaps better for you under the names 3D Audio or Spacial Audio famous.

"If you subscribe to Apple Music, you can hear select tracks in 3D audio with Dolby Atmos", says the support page HT212182 by Apple. You can get to this not only with the link, but also if you are in the music App First tap on "Dolby Atmos" and then on "More Info". On the page you will then learn how to use the audio technology on various Apple devices - on the iPhone and iPad, on the Mac, on the HomePod, with the Apple TV, and also on Android devices from other manufacturers. At the bottom there is an FAQ with frequently asked questions and the appropriate answers on the topic.

What is Dolby Atmos actually?

Dolby Atmos isn't something Apple dreamed up. The audio technology from Dolby Laboratories has been around since 2012. At that time it was initially aimed at cinemas and home cinema systems. In theory, the technology allows the use of an unlimited number of audio tracks. These can be used in a 3D digital environment in such a way that they simulate a spatial sound environment. This is explained in a more concrete and technical way in the corresponding section Wikipedia article: "In contrast to the purely channel-based surround formats, vector-based meta data for moving objects can be integrated into the data stream, the coordinates of which are then calculated by the receiver relative to the respective loudspeaker setup."