Apple October Event 2021: Everything that is (likely) to come 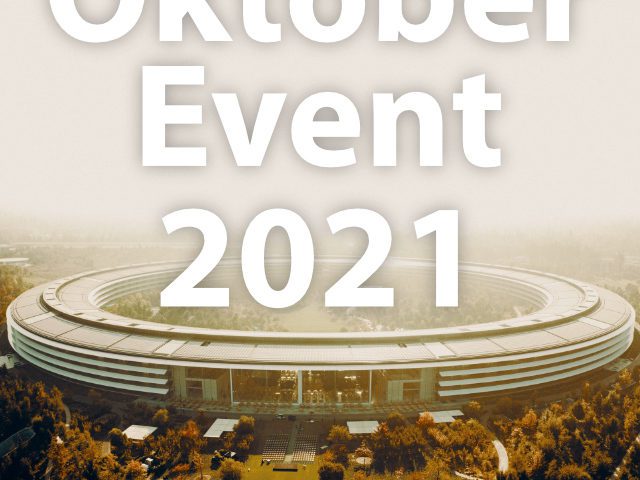 We already summarized in August, what products we expectwhen Apple celebrates its traditional autumn keynote. In the same month we oracle that there would be not just one event, but several presentations again. At that time the question was still: MacBook Pro in October, iPad mini in November? But now we already have them September Keynote 2021 behind us, some of the expected devices are not only presented, but also delivered to the first users. So what's next in October? And is there anything left for November? Here is a forecast for the Apple October event 2021!

The Apple October 2021 event could be about more mobile devices: MacBook Pro, MacBook Air, AirPods 3 and even a new Mac mini. Home devices like iMac and HomePod mini might be available in November.

For September we were quite right with the first three paragraphs of our review of August. The iPhone 13, the Apple Watch Series 7 and the iPad mini 6 were presented. But the 9th generation iPad also came along. The laptops and headphones, which are part of the rest of the list, are particularly interesting for October.

Since the presentation of the Apple MacBook Pro with M1 chip in 2020, users of the power laptop have been waiting for a larger version of it. Because only that was presented last year 13,3-inch display model. For the October Keynote 2021 we expect a model with 16 inches and a new size in the form of 14 inches. Both of them most likely bring that M1X chip as SoC with. It is also rumored that in addition to some Thunderbolt connections with USB 4 in USB-C form, there will also be more interfaces again: USB-A, HDMI, an SD card reader, etc. In addition, the displays are said to have built-in mini LEDs.

Mac mini with a new design

Not on our August list, but due to numerous rumors, a new Mac mini is now quite likely. Although already appeared last year one with an M1 chip, but this should change again all around. Not only should an M1X chip be installed, the housing should also be thinner, have a glass surface and offer even more connections on the back. There should be four instead of two Thunderbolt ports with USB 4 and a magnetic power cable. We are excited to see what innovations there will be and whether Apple will even present a new Mac mini at the October 2021 event.

MacBook Air with a colored case

The MacBook Air was also launched in 2020 as one of the first M1 Macs, also with a 13,3-inch display. Nice since May 2021 but it is rumored whether Apple will not push further models. These should follow the example of M1 iMac and be available with housings in several cheerful colors. This is to restore the scheme of the colorful consumer Macs and the silver and gray Pro Macs that existed in the late 1990s and early 2000s. In addition, the new MacBook Air models may also get the M1X chip and larger displays.

Is my Mac compatible with macOS Monterey?

AirPods 3 with a shorter case

The 3rd generation Apple AirPods, if you believe various sources, will be presented at the Apple October 2021 event. There are currently reports that they are in production and are almost ready for the presentation. The AirPods 3 are said to be earplugs without an in-ear design (like the Pro models), but which still have active noise cancellation. In addition, they should have a shorter housing. It is also rumored that they will have a touch surface for operation.

Devices that (likely) will not be featured

It is almost certain that the new Pro models of the MacBook will be presented. The idea of ​​MacBook Air and Mac mini makes sense in this context. But I'm not too sure. What may not be mentioned at all is the iMac. After last year's 24-inch model, fans of the desktop Mac are still waiting for a 27-inch version. For the coming year, an iMac with a 32 inch display is expected, then even with an M2 chip. In short: After Apple's October Keynote 2021, there may be another November event that revolves around devices for home: iMac, HomePod mini, smart home products, etc.

What do you think? Feel free to leave a comment on the topic :)