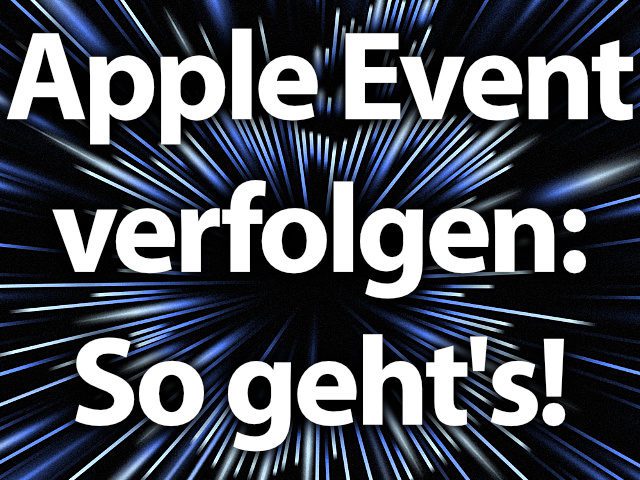 The Apple October Keynote 2021 will take place today, and you can follow it live over the Internet. There are various sources that you can tap into, such as the Apple website or YouTube. In this guide you will find the necessary links with which you can go directly to the respective transmissions of the product presentation. On Monday, October 18, 2021, new models of the MacBook Pro with M1X chip and the new Apple AirPods 3 headphones are expected. New MacBook Air models could also be included. More about the announcement of the Apple event and our expectations is available with this link.

If you want to watch the Apple event live tonight, there are several ways to do so. You can watch the October Keynote 2021 on the iPhone manufacturer's website, stream it on YouTube and follow it on Apple TV.

Like many years before, the Apple Special Event in October 2021 will be broadcast on the iPhone manufacturer's website. Just look up tonight from 19:00 p.m. https://www.apple.com/de/apple-events/ over, there is then a corresponding video player in which you can watch the broadcast. If you access the site later, you can catch up on the event there. In addition, all other previous Apple events are available, so that you can also repeat the September keynote or the WWDC21 keynote can catch up.

For some years now, Apple has not only allowed access to its own stream via non-Apple web browsers on Windows PCs, but also from pretty much all other devices. Because keynotes and events are also broadcast on YouTube so that they can be viewed live and then played back as video-on-demand. To follow today's October event from Apple live, simply use from 19:00 p.m. this link. Or watch the transmission of the product presentation here in the blog via the following built-in player:

You can also stream the Apple October Keynote 2021 live via the Apple TV, i.e. the set-top box for the television, as well as the Apple TV app on iPhone, iPad, Mac, Smart TV and Fire TV. At the time of going to press for this article, however, I have not yet been able to discover an option for this. However, since this option is officially mentioned by Apple, it should actually work this evening from 19:00 p.m. Just take a quick look at the Apple TV app beforehand. There may then be an extra tab for this or the event streaming will be advertised on the home page. Alternatively, you just start YouTube ...

Tonight's product launch will again be in English. But that doesn't matter, because I'll be on the stream from 19:00 p.m., take notes and then give you a summary in German. You can of course find them here at Sir Apfelot. So check back tonight or tomorrow and you will get the most important information from the keynote, the technical data of the new devices and other details clearly presented with matching screenshots of the stream. Until then ;)