How nice it used to be when you could click photos from Apperture or iPhoto and then drag them to the Photoshop icon in the dock. Schwups the selected photo was opened in the favorite photo editor. Unfortunately, this no longer works with "Apple Photos" and there are quite a few pro users whose workflows are based directly on this simple drag and drop. Particularly disappointing: The operating system in particular, which decades ago delighted users with drag-and-drop options between a wide variety of programs, has apparently forgotten how pleasant it is.

To this day I have always made do with dragging the photos from "Photos" onto the desktop and then moving them from there to Photoshop. So you have all the photos you want to open again in Adobe Photoshop. The disadvantage: The matter is unnecessarily complicated and you also create numerous duplicates, which quickly cause you to lose track of the desktop. 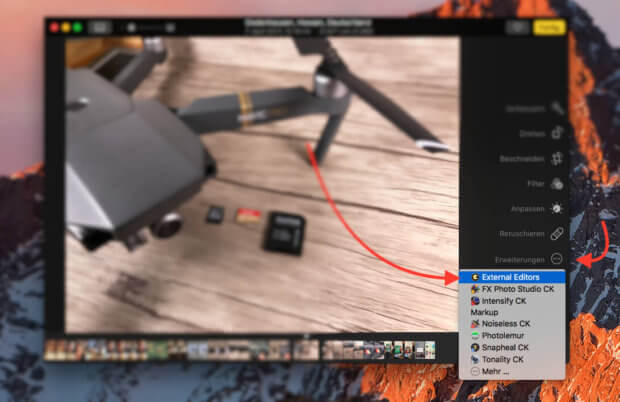 With a program extension, you have immediate access to your desired photo editing software such as Photoshop, Lightroom, Affinity Photo or similar.

The "better" way for individual photos

A much more user-friendly way, however, is possible with a small extension that integrates any photo editor in Apple Photos. 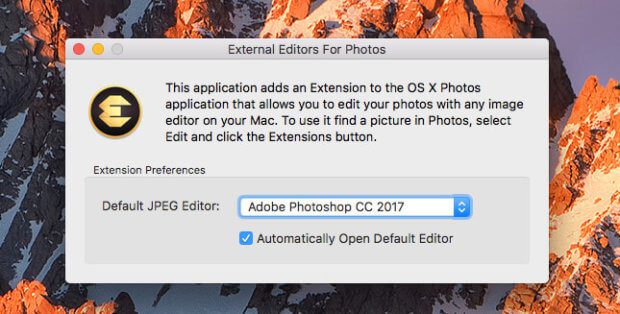 When you start the program for the first time, you can select your favorite photo editor, which can then always be accessed via the extensions in Apple Photos.

The desired photo editor is set after the first start of the program. In Apple Photos you can then access it via the detailed view of a photo and then in the upper right corner via the button for "Edit". Then the editing window opens in "Photos" and there is the "Extensions" button at the bottom right in the sidebar. The entry "External Editors" then appears there and this in turn opens the selected photo in the desired application (such as Adobe Photoshop).

If you then save the photo in Photoshop, it is imported directly into Apple Photos. However, you can always go back to the original (just as you can if you have edited a photo in Apple Photos).

Disadvantage: You cannot open multiple photos from one time in Photoshop, as it would be possible with drag and drop. But basically it is an improvement on the current status quo, so I would recommend the solution anyway.

Here is a screencast from the programmer showing how to work with the extension:

The program that makes this possible is called "External Editors For Photos" and available here in the Mac App Store. It costs 99 cents and from my point of view is worth the money.

The program can be found in the Mac App Store under the name "External Editors For Photos". It currently costs 99 cents, which is almost free if you can save time every day.

If you like to be out and about for free, you can too this program times test it. I only saw afterwards that it offers almost the same functionality, but is available for free.

The best way: an update from Apple

If Apple had a little time to take care of its own software, it would be great if they could add this update so that you can drag and drop your photos between "Apple Photos" and the program of your choice and could move here. But I have little hope ... :(