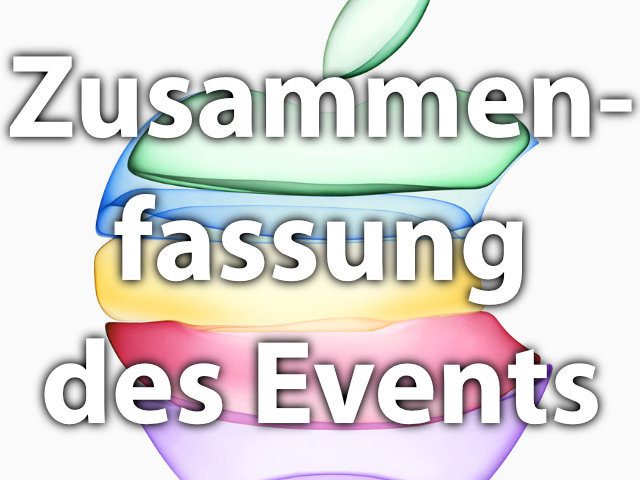 Today's Apple Special Event is over, the Steve Jobs Theater in Apple Park is now probably empty again. I watched the annual “September Keynote” from Cupertino live stream and made notes at the same time. Their summary and a few screenshots of the stream can be found below. Individual articles on the new iPhone models, the Apple Watch Series 5, the new 7th generation iPad and the operating systems iOS 13, iPadOS and watchOS 6 will be available tomorrow. So you won't miss any details here in the blog! 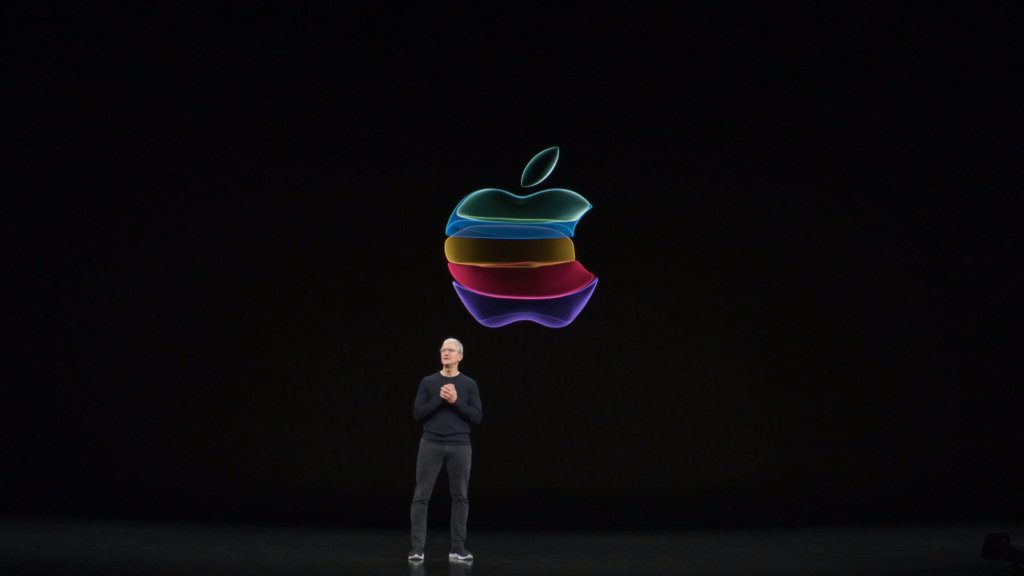 Of course, Tim Cook opened the Apple Special Event on September 10, 2019 at the Steve Jobs Theater.

Opening of the Apple September Keynote 2019 by Tim Cook

Of course, this Apple event was also opened by the company's CEO, Tim Cook. Before that, an animated video was shown showing various products and services from Apple. It should probably describe the development up to the present day and lead to what was presented below. After a few introductory words, Tim Cook went straight to the App Store, the one for iOS. Because Apple Arcade will be available from September 19, 2019. 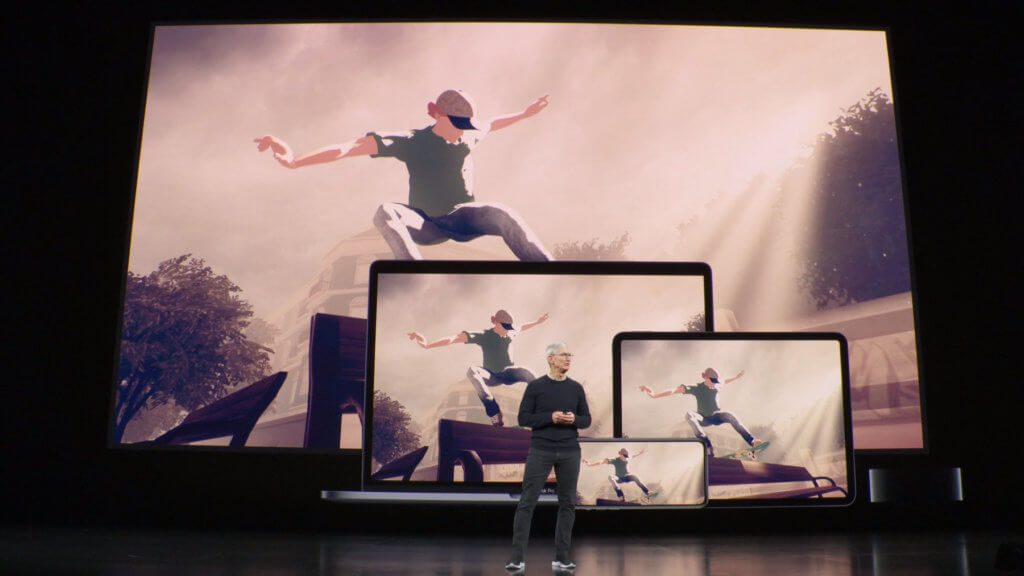 Without saying too many words about the start of the event, Cook went to the App Store and thus to Aple Arcade.

The game service with over 100 games and new releases every month is available as a subscription for $ 4,99. The price is for the whole family. The start date from which you can secure a free month to try out applies in over 150 countries. At the Apple Special Event in the Steve Jobs Theater, three developers and their games that came with Apple Arcade come on the apple devices: 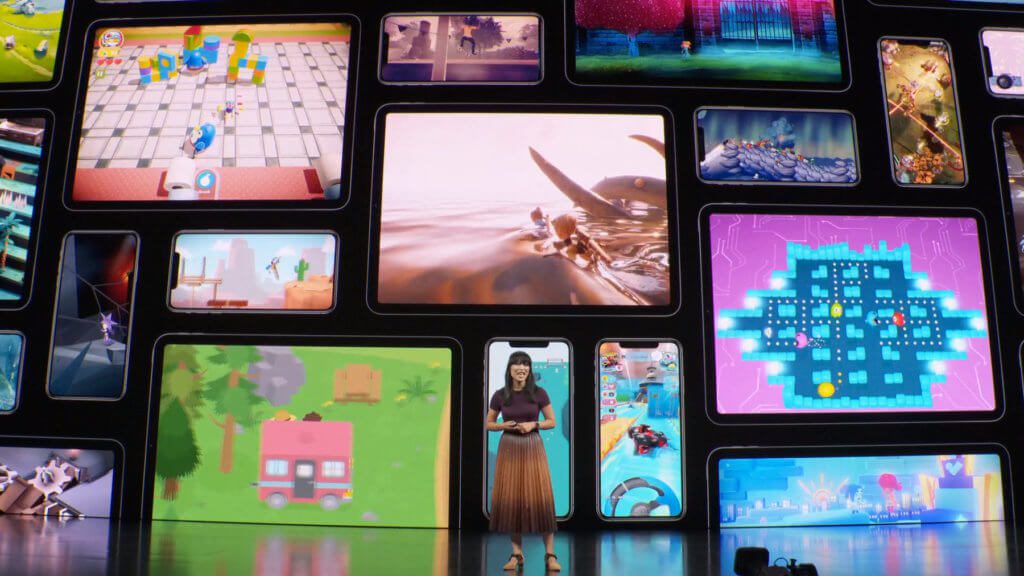 From September 19, 2019, the affordable gaming subscription will be available in over 150 countries.

Then, relatively briefly, the new streaming service was used Apple tv + received. This will start in early November 2019 in over 100 countries and will also cost only $ 4,99 a month. Among the "best original stories from the most creative minds", as Tim Cook (roughly) said, are the series "For All Mankind", "The Morning Show" and "Dickenson", which are already known and presented with trailers. 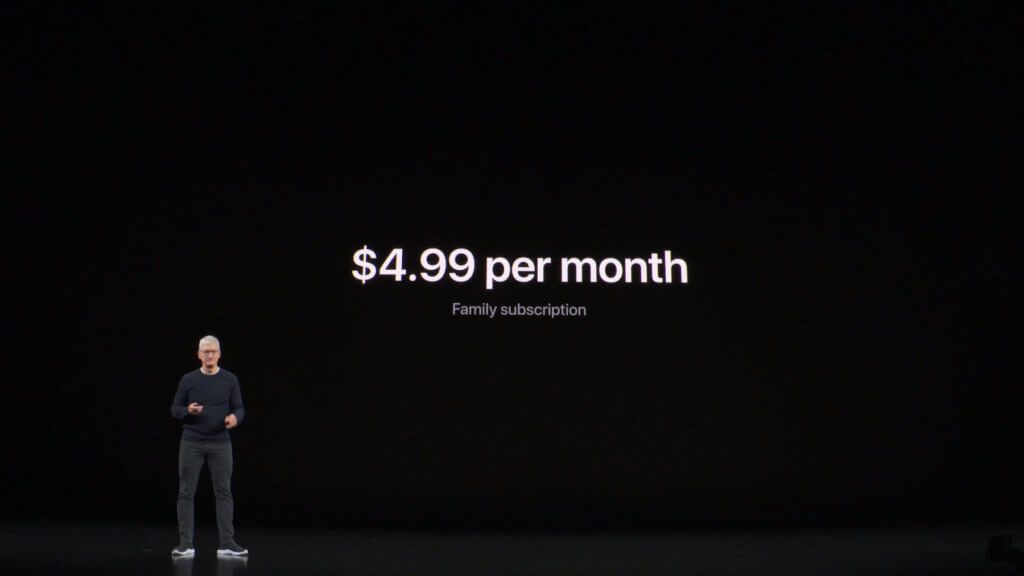 The streaming subscription for iPhone, iPad, Mac, Apple TV and so on is comparatively cheap.

A trailer for “See” was also shown as a world premiere at Apple's September 2019 keynote. The series is about a dystopian future in which everyone is blind - except for a new generation of children who can change everything. Anyone who buys a new Apple product in the future - an iPhone, a Mac, an iPad, actually everything except an Apple Watch or accessories - will get one year of Apple tv + for free. 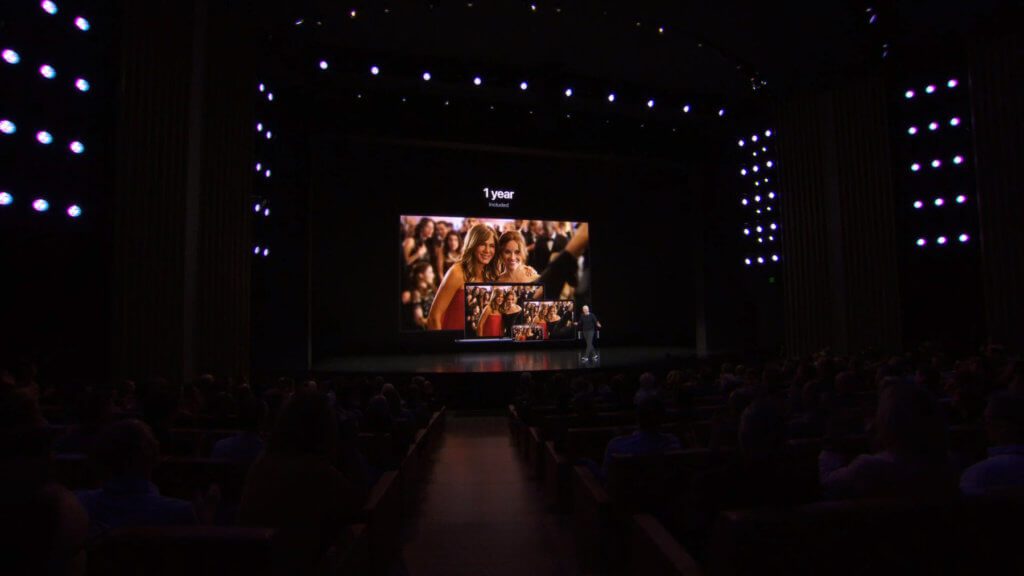 Apple tv + is free for one year if you buy a new Apple device with which the service is compatible.

In addition to the two new services from Apple, the new tablet from the technology giant from Cupertino was presented. The 7th generation iPad offers a 10,2 inch retina display with 3,5 million pixels, an A10 Fusion chip, iPadOS for better multitasking and desktop features on the mobile device and much more. Of course, the above-mentioned services can also be used with the device, which has a home button and Touch ID. The case is made from 100% recycled aluminum and the price range starts at $ 329; for the teaching area from $ 299. You will find detailed information and the price in euros here on the blog tomorrow - in a separate post. 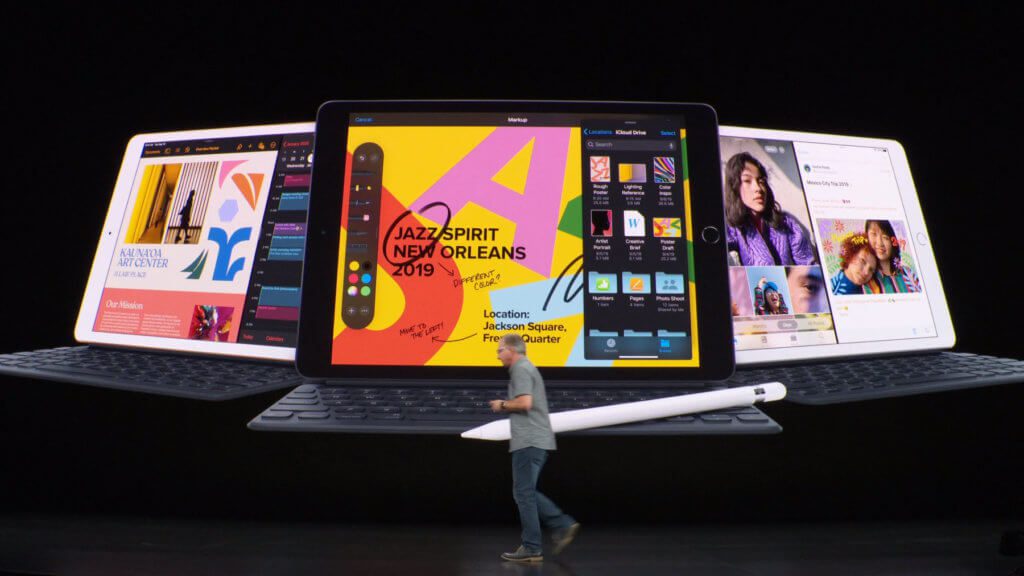 The new 7th generation iPad with 10,2 inch display comes with an A10 Fusion Chip and iPadOS.

Once again, the smartwatch segment of the presentation was introduced with a video that showed personal stories from Apple Watch users. From an older man whose watch first called XNUMX and then his wife after a fall, to a woman who was diagnosed with heart problems during pregnancy, to an autistic boy who thanks to the music streamed from his Apple Watch , jogging or running more concentrated and thus taking part in competitions, there was a lot involved.

In addition, a heart study was addressed in which over 400.000 users of the Apple Watch took part. Following this success, three new studies were presented for the USA in which people who use an Apple Watch can participate. The "Apple Hearing Study" deals with the long-term effects of ambient noises and their volume. The "Apple Women's Health Study" is intended to examine the influence of the female cycle on other areas of the organism. And the Apple Heart and Movement Study is a study that examines cardiovascular exercise on overall health. 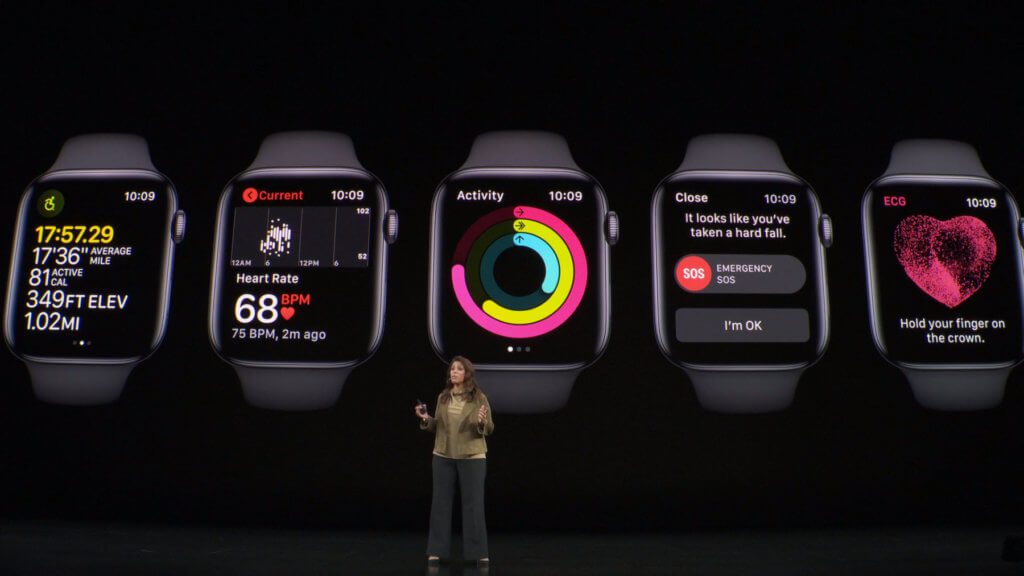 For the manufacturer, the Apple Watch is associated with fitness and health, among other things.

Then the new Apple Watch Series 5 was presented. This doesn't just come with the new one Watch 6 Operating system therefore, but also with an always-on display. Its brightness is dimmed if you don't lift the watch to look at it.

In addition, the frame rate is dynamic and ranges from 1 Hz to 60 Hz. This helps to maintain the 18 hours of battery life despite the always-on display. As can already be seen from the feature and the battery life, there is a damper: the sleep and sleep phase monitoring that is rumored to be expected was not mentioned; it is not part of the functionality of the Apple Watch Series 5 with watchOS 6. 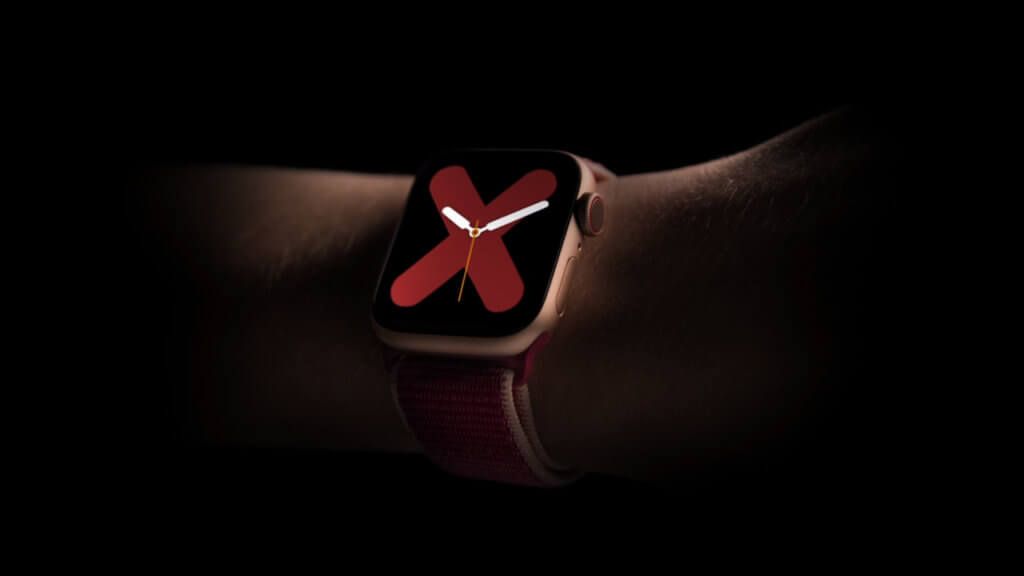 For this purpose, a compass has been integrated into the new generation of smartwatches, which is not only used in maps, its own compass app and as a complication on the dial. Third-party apps can also leverage the compass and use it for navigation, scavenger hunts and whatever.

The emergency call function has also been internationalized and now automatically helps regionally when traveling abroad in over 150 countries. The aluminum models are made from 100% recycled housing material. Wifi models start at $ 399 and cellular models start at $ 499. Details will follow tomorrow in a single post. 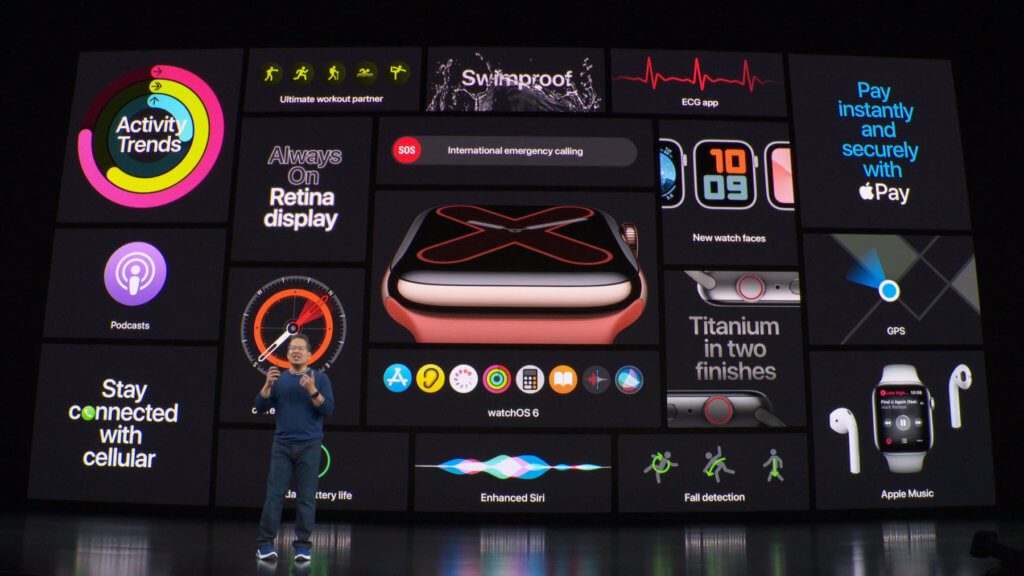 New technology, a new operating system and thus new functions - but no sleep or sleep phase monitoring as assumed.

The new iPhone 11 is the successor to the iPhone XR, but comes with a double camera. The housing is made of aluminum and glass, the cameras on the back offer a wide and an ultra-wide lens. New software for photo processing now offers even better HDR with multi-tone skin mapping and other improvements. In portrait mode there is a new feature for great gray-tone shots with “High Key Mono”. 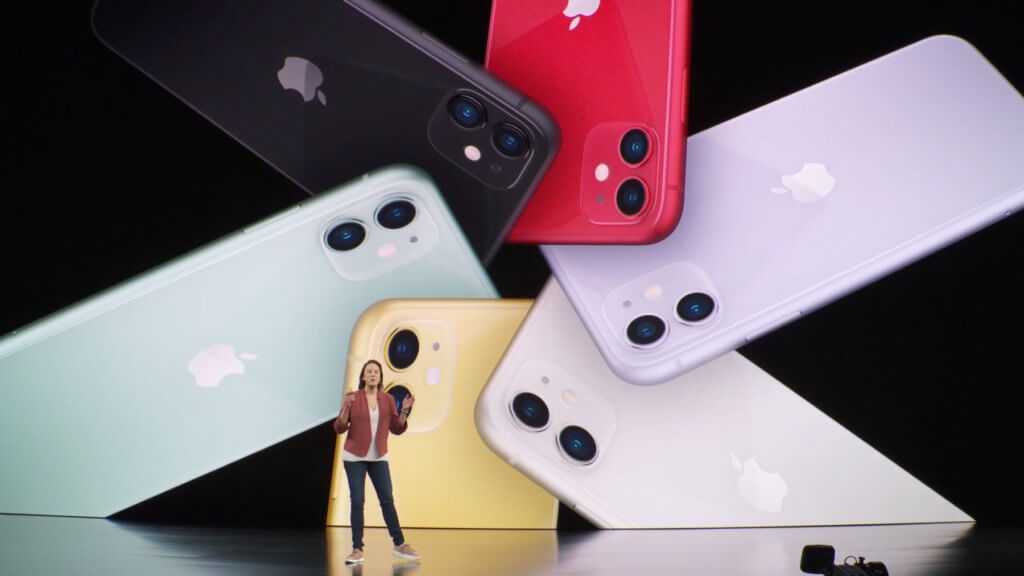 The new Apple iPhone 11 with double camera and iOS 13 is the successor to the iPhone XR.

Videos can be recorded with 4K and 60 fps as well as new stabilization. There was a slip of the tongue when the zoom wheel was presented in the camera app: there was talk of three instead of two cameras. There was a pause and a knowing laugh from the audience - more on the reason later.

The FaceTime or selfie camera has also been revised for the iPhone 11. The 12 MP TrueDepth camera now offers an additional sensor for group shots in landscape format. Videos can be recorded with 4K resolution and 60 fps. 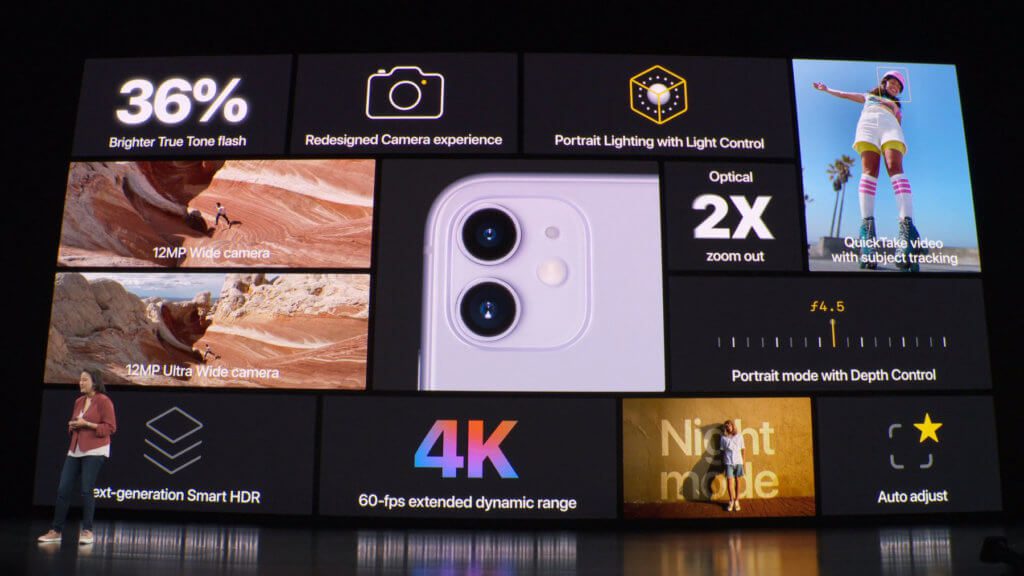 A new A13 bionic chip, new software and so on make the iPhone 11 quite interesting.

The new A13 Bionic Chip offers "the fastest CPU in a smartphone" as well as smart energy management, so that the iPhone 11 should offer one hour more battery life than the iPhone XR. In addition, Face ID is now even faster and supports more dull viewing angles. Wifi 6 is also supported. The device will be available from $ 699.

The first iPhone to get a “Pro” addition explains the slip of the tongue described above and the reaction to it. Because the two models with 5,8-inch and 6,5-inch displays offer a triple camera on the back that has it all.

Thanks to telephoto, wide-angle and ultra-wide-angle lenses, you can now not only zoom in (from 1x to 2x), but also zoom out (from 1x to 0.5x). Thanks to the new A13 Bionic Chip, the three cameras are also synchronized in real time with regard to focus, ISO and other settings, so that switching between lenses is smooth. 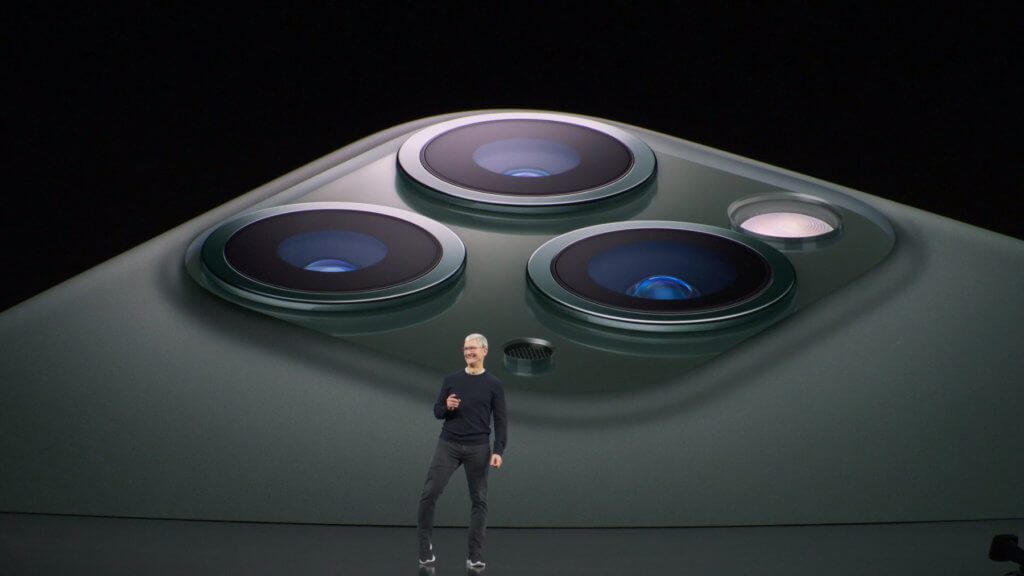 Of course, the rumors have been confirmed: the iPhone 11 Pro (Max) has a triple camera, and it produces enormous performances!

At the Apple Special Event there was also a demonstration of the FiLMiC Pro app, with which you can not only access all four built-in cameras at the same time, but also record with several at the same time. This should simplify the planning and production of videos, films and series via the iPhone. More details, pictures and technical values ​​tomorrow in the individual article on the iPhone 11 Pro (Max). 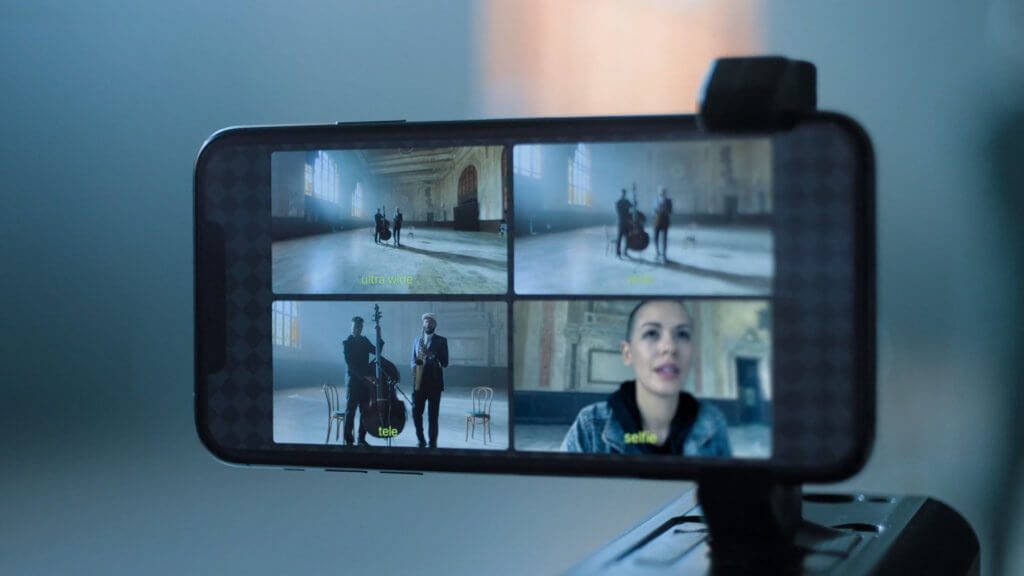 Pros who want to use the new "Pro" camera functions of the Apple iPhone 11 Pro (Max) can use the FiLMiC Pro app.

Here are the prices presented for the two devices:

Most recently, the retail sector was discussed at the Apple September keynote in 2019. In the future, Apple stores will offer more options to personalize your products before you buy them. For example, the case and the bracelets of the Apple Watch should now all be freely combined and tried out in order to be able to personalize the purchase on site. The whole thing is called “Apple Watch Studio”. 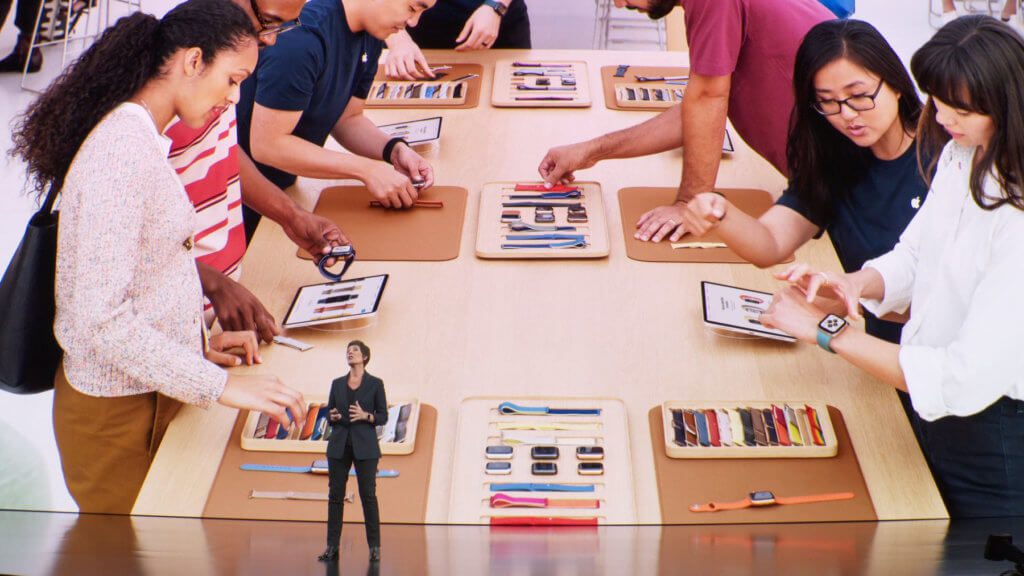 In the Apple Store, the "Apple Watch Studio" is supposed to help put together the right watch for everyone.

"Apple Trade In" was also discussed. So if you swap your old Apple device for a new one, you get a discount. Depending on the device you bring with you, you can get the Apple iPhone 11 Pro Max from $ 699 or $ 29 a month. The iPhone 11 starts at $ 399 or $ 17 a month. I don't think that's bad at all; especially since Apple gets devices for its refurbished program or for recycling.

The Apple Special Event for the new iPhone and other new offers could also be viewed on YouTube for the first time this year. Numerous people around the world have taken advantage of this opportunity. 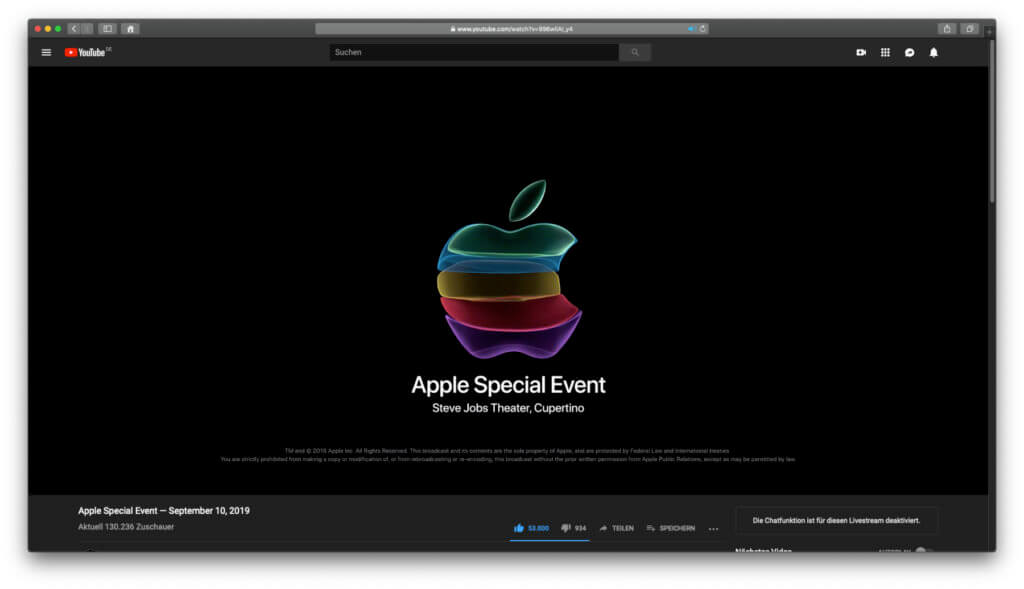 In addition to the stream on the Apple website, I had the YouTube page open to see how many people were watching and what other details there were to report. I was able to record the following information and data: