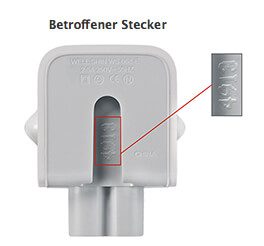 Anyone who knows the power supplies from Apple will know that a small plug serves as an adapter for various types of sockets. Exactly this small power supply plug now seems to be causing problems. Batches that were delivered between 2003 and 2015 are affected. The wording of a mail to me looks like this:

Apple has determined that on its two-prong power adapter plugs, intended for use in continental Europe, Australia, New Zealand, Korea, Argentina, and Brazil, on rare occasions, the prongs can break and present the risk of electric shock . These power adapter plugs shipped with Mac and certain iOS devices between 2003 and 2015, and as part of the Apple Travel Adapter Kit.

More information about the exchange program and the possibilities of how you can order a new power adapter plug can be found on this subpage:

How do you recognize an affected connector?

So that you can determine for yourself whether you have an affected connector or not, Apple created a graphic:

In the affected models a number is printed in the thin slot, while in the unproblematic models a sign with "EUR" can be seen.

I just checked my connector and I have an affected connector. However, the number is extremely lightly printed or lasered and only very difficult to see. It was no longer recognizable on a photo, otherwise I would have built this into you.

Here again the list of the affected connector models in the overview: