As with the iPhone and iPad, the screen protection of the Apple Watch with screen protector, tempered glass or silicone cases is an important issue. Because the display of the smartwatch can also get scratches or cause damage somewhere. Protection against bumps, stabs and scratching materials is available in different versions for the Series 1, Series 2 and Series 3 of the Cupertino watch. Details and examples for the screen protection for the Apple Watch as bulletproof glass, foil and cases are given below.

There are various protective products for the display of the Apple Watch, for example simple foils to stick on. For most of them, it doesn't matter which series you use - the dimensions of the various models range from the first generation from 2015 to the Apple Watch Series 3 from 2017 almost the same. When choosing the right Apple Watch screen protector, it is especially important whether you use a 38mm model or a 42mm model. It is also important to know that most protective films for the display of the Apple Watch only cover the straight surface and not the bulges of the glass: 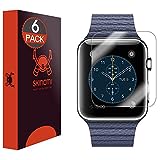 Skinomi urethane film for 42mm models
This Apple Watch screen protector is made of self-healing urethane (liquid film), which, according to the manufacturer, does not become electrostatically charged. Adaptation (but not complete coverage) to the curved display. Glass protection from scratches, bumps and impacts as an aid to a long-lasting product.
Buy it at Amazon Price includes VAT, plus shipping costs (updated: 13.01.2022 at 06: 15 clock) 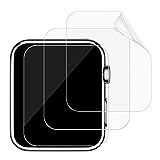 Flexible protective film for complete coverage, 38mm
Here you get 3 screen protectors for the Apple Watch with a small housing. According to the manufacturer, the flexible film should also adapt to the curved parts and thus cover the entire glass - complete protection with just one article. Questions, answers and help on the product page.
Buy it at Amazon Price includes VAT, plus shipping costs (updated: 13.01.2022 at 06: 15 clock) 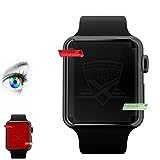 PROTOMAX - Almost complete film for both sizes
With this protective film for the Apple Watch Series 2, 38mm and 42mm, the corners are cut out so that the resulting tabs can be placed on the glass bulges. There are 3 screen protectors in the scope of delivery.
Buy it at Amazon Price includes VAT, plus shipping costs (updated: 13.01.2022 at 06: 15 clock)

A special plus when it comes to protecting against bumps and scratches in the glass of the Apple Watch is bulletproof glass or “9H protective film”. Here I have selected small and complete screen protectors for both sizes. The small versions are ideal if you still want to attach a protective cover. Complete protection is something for you if you want to use the Apple Watch without a case. 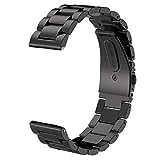 Silicone cover as all-round protection
This silicone bumper offers good protection for the watch case. In addition to the transparent version, you will also find some in rose, gold, black and silver on the product page - matching the iPhone used. There is also a 5-pack with all models.
Buy it at Amazon Price includes VAT, plus shipping costs (updated: 13.01.2022 at 06: 15 clock) 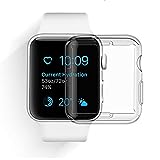 TPU protective case with display cover
This Apple Watch protective cover for both sizes and all series from 2015, 2016 and 2017 serves as a case for the case as well as a screen protector for the Apple Watch. Information and reviews on the Amazon site.
Buy it at Amazon Price includes VAT, plus shipping costs (updated: 13.01.2022 at 06: 15 clock)

As for the iPhone and iPad, covers and screen protectors for the Apple Watch are definitely useful accessories for high-quality mobile devices. The Apple Watch in particular is worn directly on the wrist and is therefore more exposed to the environment and the movements of arms and hands. A lot can go wrong. An Apple Watch bulletproof glass, a completely protective case or a flexible screen protector in a self-healing "liquid" version - which accessories do you tend to use to protect the watch? Feel free to leave a comment, a review, reports on the accessory test or questions on the subject!