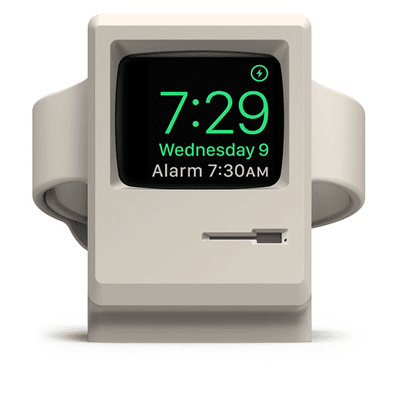 1984 Implement the design with the 2017 Apple Watch charging station

The Apple Watch charging station, which is offered for 24,95 euros, is not (yet) available on Amazon. So if you want to buy them, you have to go to the manufacturer's website: just click here. 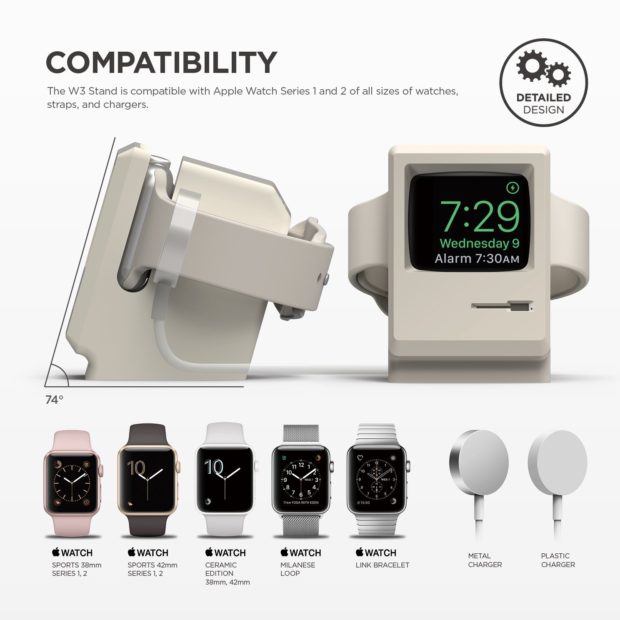 There are more details about the charging station for the Apple Watch on the product pages. Among other things, the silicone material used is discussed, which protects the watch and - contrary to the plastic stations - does not leave any scratches. It also shows how well the USB charging cable can be stretched and how it is used in the small Macintosh.

Holder and charging station for Apple Watch and iPhone from Elekin

If you want to store and charge not only the Apple Watch, but also the Apple iPhone in a stylish holder, Elekin will come for about 13 euros. I think the price is very well chosen for this charging station, which has space for the Apple Watch and iPhone. The cables for the power supply can be brought in very nicely and everything seems to be from one piece.

Okay, with this elegant wooden product you can charge the Apple Watch, but you can only set up the iPhone and iPad so that everything is tidy. If you also want to charge your iPhone, iPad or Apple iPod, you have to drill a few more holes for better or worse or place the devices sideways to connect the charging cable. A handicraft lesson could be worthwhile, however, because there is enough space on the board to place more than just an iPhone or iPad. With a bit of drilling and milling, you can create an elegant charging station for the office, in which other smartphones and tablets can be accommodated in addition to the iPhone, iPad and Apple Watch ...

If you already have an Apple Watch Station and now need or want a docking station for the Apple iPhone or Apple-compatible protective films for your smartphone, then take a look at ours StilGut competition past. That runs until February 15, 2017. All three prizes are ideal for the Apple iPhone (iPhone 5 to iPhone 7 Plus); and participation is free!

Which station for the Apple Watch and the other Apple devices do you like best? Do you have any other suggestions on how to store and charge the Apple Watch, iPhone, iPhone and similar gadgets in an elegant way? Feel free to leave a comment :)