Apple Watch - Turn "Hey Siri" on and off 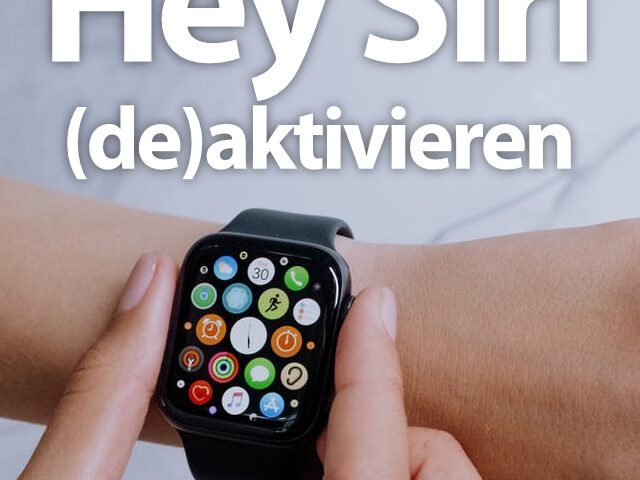 The Apple Watch is not only a practical smartwatch for measuring fitness and health data. By coupling with the iPhone, iPad and Mac, it also offers the option of operating across devices. With GPS, cellular network, WLAN, a comparatively large memory and other great features, it is also a practical companion as a stand-alone solution. And you don't even have to use your hands to use many functions. over Hey Siri voice commands can be given. Like you on the Apple Watch Hey Siri (de) activate, I have summarized that for you in this guide.

Do you want to activate or deactivate Siri on the Apple Watch? With the following instructions you turn the "Hey Siri" command under watchOS on or off.

Use Siri on the Apple Watch: Here's how!

If you want to use the Siri voice assistant on your iPhone or iPad, just say “Hey Siri” and the digital helper will listen to you. This only works on the Apple Watch when the display is on. Therefore, the first way you can use Siri with the Apple Watch is to raise your arm so that the Apple Watch display wakes up. Then you can pronounce the Hey Siri command and then give your command. If the command can be implemented in watchOS, you will get a result directly.

If you want to call someone, start an app, play music or have a message read to you, there are other ways too. To wake up the display, you can tap it, for example. This procedure is useful when you cannot or do not want to move your arm to activate the watch - for example when driving a car, in bed or when the Apple Watch is lying down somewhere to be charged. Tap the display, say "Hey Siri" and then your command. Siri will already try to implement it.

If you don't want the Apple Watch to listen to you, to start an app after a voice command, to read news articles or to carry out other functions, then this can of course be set. This is especially important when you buy a new Apple Watch, because “Hey Siri” is activated by default. To turn off Siri on the Apple Watch you do the following:

Of course you can Settings -> General -> Crab move the slider to the right again to activate Hey Siri on the Apple Watch. It works in a similar way under iOS on the iPhone and under iPadOS on the iPad. If you have any questions, please leave a comment or use this Sir Apfelot Forum ;)