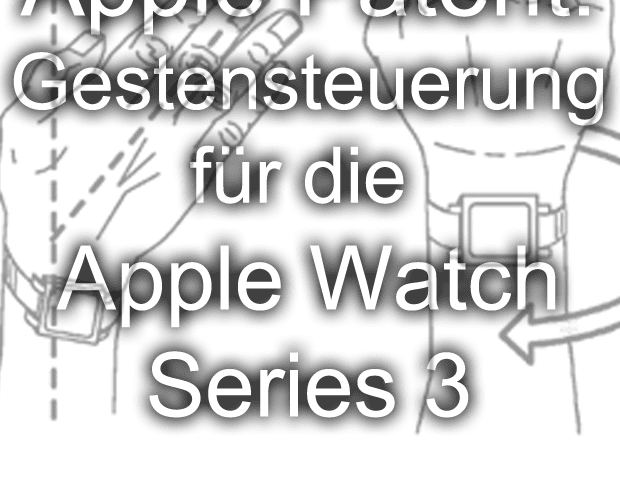 Admittedly, it is not a real innovation, because Android wearables can already do so can be controlled with gestures. Nevertheless, it would be an innovation for the Apple Watch, which already on the last keynote started the second series with ample revaluations. The third generation of Apple's smartwatch could now be operated using hand, arm and / or wrist movements.

Among other things, these gestures should serve the function selection in the Apple Watch (Series 3?) In the future; Image source: United States Patent and Trademark Office

Patent description for gesture control in the Apple Watch Series 3

Laut the current patent application the patent is described as follows: "A function of an electronic device may be invoked using wrist movement (e.g., extension, flexion) detected by a wrist-worn device. The gesture can be detected using sensors in the wrist-worn device, e.g. B. in the bracelet and / or behind a cover element.

A specific gesture can be identified by analyzing sensor signals from a library. The called function can be performed on the wrist device or another device that is paired with the wrist device."

Tilt and turn - and if it cracks, then the user was too ambitious;) But the gesture control on the Apple Watch is an interesting idea; Image source: United States Patent and Trademark Office

Will the Apple Watch Series 3 become the nine Myo bracelet?

It has been on the market for some time Myo Gesture Control bracelet, which also uses hand movements and gestures as well as muscle activities to control devices or the smart home. According to the manufacturer, the device, which costs just under 250 euros, can be coupled with more than 100 applications. In addition, developers can create their own solutions for "Home automation, drones, computer games, virtual reality and much more" Find.

With the new smartwatch off Cupertinothat probably on the Keynote 2017 will be presented, something similar could then be possible. Whether raising or lowering the shutters with a gesture of the hand, sending files with a tap of the finger or steering the drone with a gesture that points to "the Force" Star Wars reminded - I think that and a lot more will be possible with Apple from next year. The tenth birthday of the iPhone is also celebrated with the periphery;)