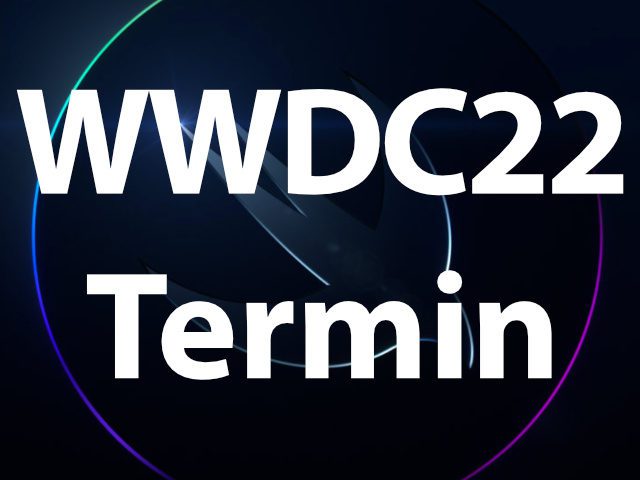 Last night Apple announced when and where this year's Worldwide Developers Conference will be held. The Date of WWDC22 represents the period from June 6th to June 10th, 2022. This means that on Monday June 6th, 2022 there will be a Keynote with news about iOS, iPadOS, macOS, watchOS, tvOS and Co. New Apple devices may also be presented as part of the presentation. The iPhone maker Cupertino has opted for an online WWDC again this year, making WWDC22 the third of its kind in a row – triggered by the global Covid-19 pandemic.

The date for the Apple WWDC22 has been set. From June 6th to 10th, 2022 there will be the next online WWDC with a keynote on iOS, iPadOS, macOS, tvOS, watchOS and Co. as well as workshops, appointments with Apple experts for developers and more. The Swift Student Challenge runs until April 25, 2022.

WWDC22 as an online event for developers

In addition to the already mentioned keynote in Apple Park, with which WWDC will start in 2022, there are also numerous opportunities for developers to take on the new operating systems and their possibilities until the following Friday. There will be workshops, appointments with Apple engineers and access to instructions and other materials. This year's WWDC marks the 33rd event of its kind, since the Worldwide Developers Conference has been held annually since 1990. At first the dates were always in May, since 2003 it has been held in June.

"At its core, WWDC has always been a forum to facilitate connections and build communitysaid Susan Prescott, Apple's vice president of Worldwide Developer Relations and Enterprise and Education Marketing. "In this spirit, WWDC22 invites developers from around the world to come together and explore together how to bring their best ideas to life and push the boundaries of what is possible. We love connecting with our developers and we hope that all of our participants leave feeling that their experience has enriched them."

In addition to being held as an online event, there is also another "third birthday", namely for the Swift Student Challenge. Students around the world have until April 25, 2022 to submit apps created in the Swift Playgrounds app. Official website: View here. Swift Playgrounds is an app that you can download for free on Mac or iPad to both learn to program and create your own apps directly. Finished apps can then be shipped directly from the Swift Playgrounds app to the App Store. The name of the app combines the programming language "Swift" and the playful approach to learning ("Playgrounds"). All information about the app can be found here: Info page.

"Apple is proud to support and nurture the next generation of developers through the annual WWDC student program“, It says in the official press release to announce the date of WWDC22. "Over the last three decades, thousands of students have improved their skills and exchanged ideas with other programmers of all ages. They have launched long and successful careers in the technology industry, founded startups with venture capital and founded non-profit organizations that work to create a better future."

The date of the WWDC22 is again connected to an online event. This is an advantage for those who cannot or do not want to travel to Apple Park in Cupertino, California, USA. The online format enables developers to participate in WWDC events from home or from their own office, saving time, money and CO2. It is to be hoped that this will not be the case with WWDC22 from June 6th to 10th, 2022 for the last time. Because Apple is currently already insisting that the employees of the Apple Park must be present ( ) and seems to be planning an on-site element for WWDC22 as well, according to the press release linked above:

"In addition to the online conference, Apple will be hosting a special day for developers and students at Apple Park on June 6th to join the online community to watch the keynote and the State of the Unit. Places are limited. Registration details will be announced shortly on the Apple developer website and in the app.“ You come to said website with this link. You can find the Apple Developer App with all the details and download options for Mac, iPad, iPhone and other devices with this link. What do you think of the outlined plan and date for Apple WWDC 2022? Feel free to leave a comment on the topic!