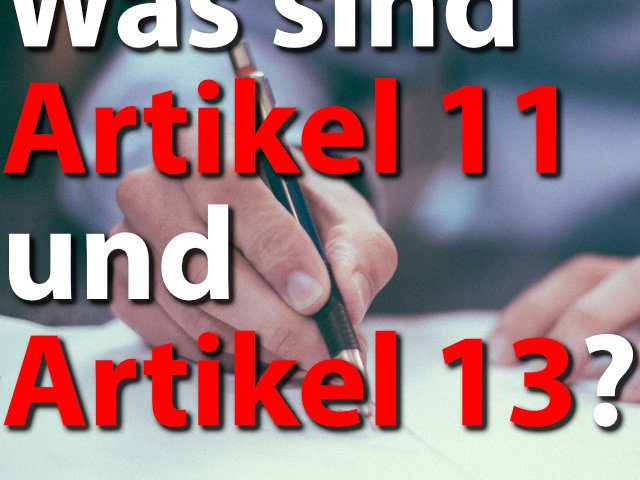 Usually politics plays a subordinate role here in the blog; and when it is mentioned, it is usually only in the context of neutral reporting. However, there is currently quite a large discourse on Article 11 and Article 13 of a new EU regulation, which the use of the Internet as we currently know and operate it is enormously endangered and can or will limit. Because the articles have already been adopted for the draft of the regulation that will become binding for the EU member states. A recent petition is directed against the final adoption of the paper - this should take place in early July.

What is Article 13? What is Article 11 about? What does the EU want with the new regulation (besides proving that it didn't understand the internet)? Here is an explanation in text and video as well as the petition against the paper.

In a nutshell, it is about an extension of copyright law on the Internet. Which does not sound bad in itself, but comes with a license requirement for all websites and platforms if they want to use third-party content. Images, quotes, videos and so on are then not allowed to be used without the explicit consent of the rights holder.

Include a movie poster in your blog post? Forget it! Share a video on Facebook? Absolutely no way! Cite newspaper articles or link with thumbnail and headline? No chance! All of these are just a few examples of the extensive usage restrictions that we are facing.

In addition to this type of ancillary copyright and copyright law, the criticism of the new regulation goes even further. Because in addition to Article 11, which provides for these measures, Article 13 regulates the use of a so-called "upload filter". Such an automatic software would basically block every picture, every video and maybe even every written word that you want to put somewhere on page XYZ.

Until it is certain that the site is allowed to publish the content, there would be an embargo. Post a piece of song lyrics to celebrate a fine day? It does not work! Share a photo from the beach? Not possible in real time! And you can also completely forget about product photos on eBay and memes on 9GAG!

Explanation of the new regulation and the problem in the video

The Wilde Beuger Solmecke law firm has on Facebook and YouTube meanwhile blossomed into the right authority for information about current legal issues, especially in media and online law. In a current video from the firm the new EU regulation, which is supposed to be smuggled past the people as part of the 2018 World Cup, is explained in detail. I would recommend you to watch the video. In addition, it would not be wrong to sign the relevant petition against the regulation (click here to come to the petition).