In the test: The AUKEY iPhone macro lens to clip on for iPhone 6 and iPhone 7

I am always a little disappointed when I want to take macro shots with the iPhone. Even with the iPhone 5 and iPhone 6, it was problematic to get close to an object. The autofocus of the iPhone is no longer able to focus on the object once it falls below a certain distance and so often only the subsequent enlargement is left with loss of image quality.

The drawing on the Aukey packaging shows how the macro lens is attached to the iPhone (Photos: Sir Apfelot).

Macro shots with the iPhone - more bad than right

With the iPhone 7 Plus, which I've recently been using, things have gotten a little better because it has the second camera lens, which is twice the magnification of the normal lens. That sounds unspectacular at first, but in practice the difference between 1x and 2x is clearly visible. But that shouldn't be the content of the article here, because it's actually about a clip-on camera lens from Aukey that enables macro shots with the iPhone - but which, with a little skill, can be combined excellently with the 2x magnification of the iPhone 7 Plus. 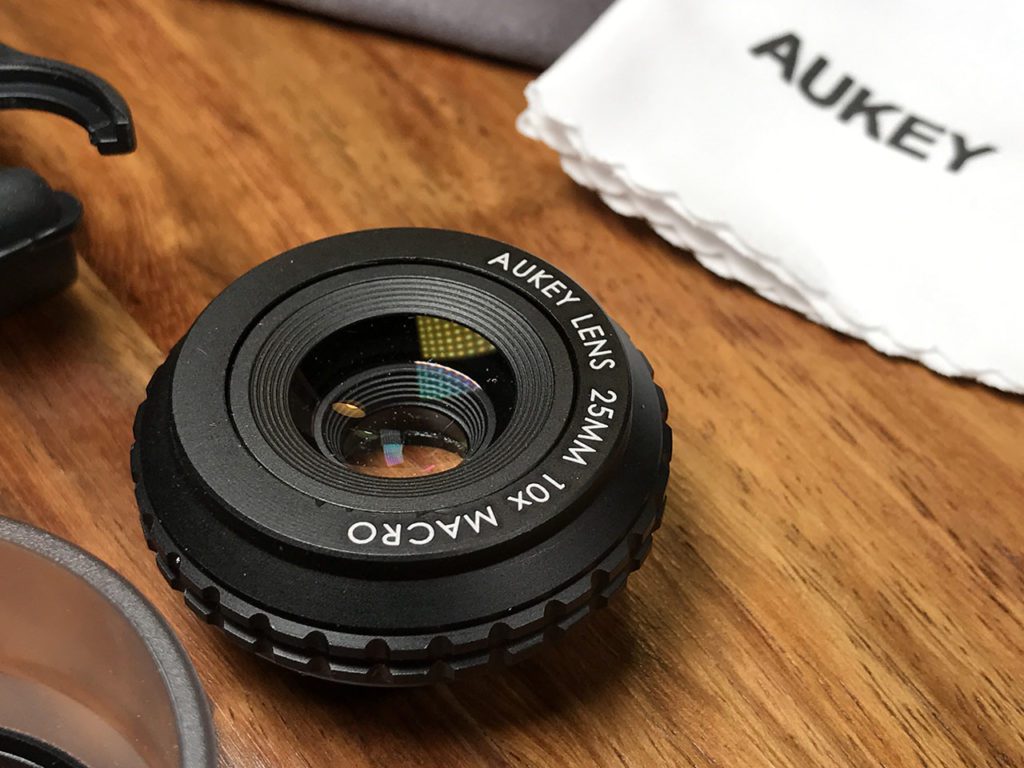 Aukey's iPhone Macro Object in detail. You can also see the coating of the lens surface, which is supposed to help against reflections, flares and ghosting.

I bought the Aukey clip-on lens for the iPhone because I wanted to test how good the pictures would be with such a lens, which is only 15 to 20 euros in purchase price. You don't have high expectations in this price range and I went into the test accordingly "prepared". 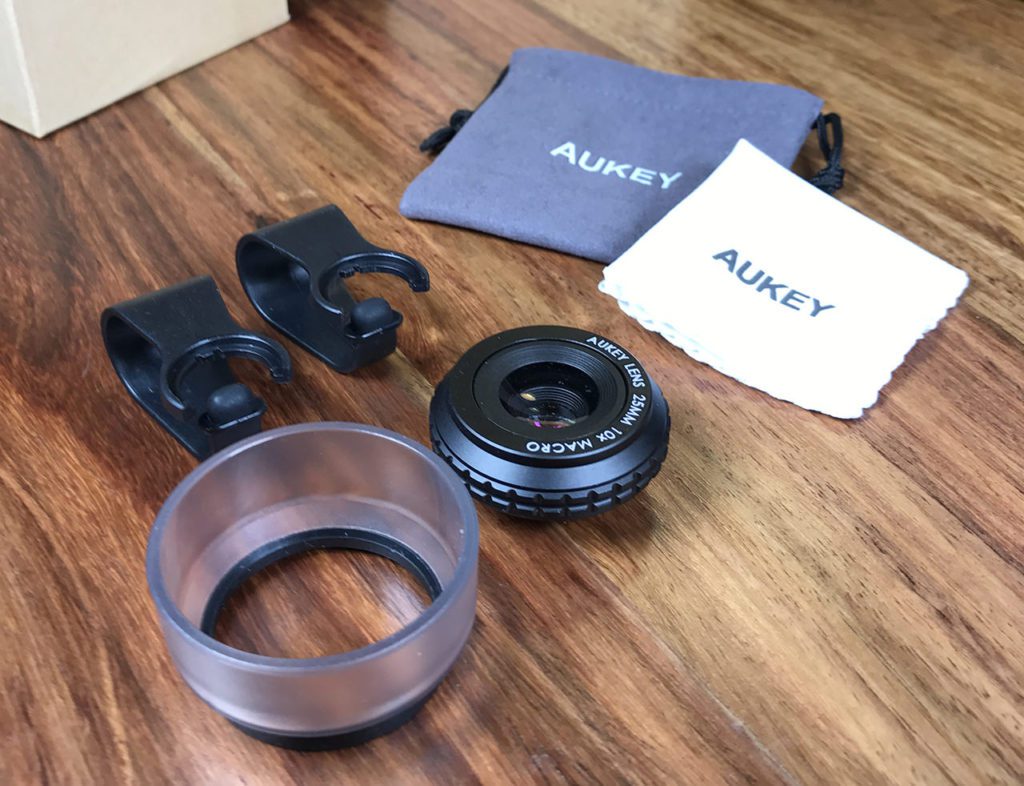 Included in delivery: the Aukey clip-on lens, a sleeve, two clips, a pouch and a microfiber cloth for cleaning.

The technical details are quickly explained: With the Aukey iPhone lens, you get a solution that is clipped onto the lens system of the smartphone relatively independently of the smartphone model. In addition to the macro lens, the set also includes a transparent push-on sleeve, which in practice is intended to ensure that the incident light is better distributed over the object to be photographed. The sleeve also specifies the optimal distance to the object so that the images are sharp. With a steady hand - or a tripod - it works much better without a sleeve.

The macro lens itself can be used for both photos and videos. However, I have only tried its use in macro photography here. The lens also has a multi-coating to avoid reflections, flares and ghosting.

It gets difficult when you have objects that move. Photographing a flower in the wind or an ant certainly takes a few shots before you can find one that is appropriately sharp. The plane that becomes sharp in the photo is also relatively narrow. That is, if you photograph a fly from the front, the eyes will be sharp, but the wings and back legs will certainly be out of focus. An effect the apple in "portrait mode" of the current iPhone 7 Plus included in photos via digital post-processing.

In order to get as much of the subject sharp as possible in the photos with the Aukey, one should try that the interesting picture elements are on an "optical level". Good lighting is also helpful, as it means that a smaller aperture is used in the camera, which in turn ensures a greater depth of field. And yes, the term is called "depth of field" and not "Focus"- I googled extra! ;-)

Compatibility of the Aukey with iPhone models

Due to the construction of the clip-on macro lens from Aukey, it can be used on various smartphones. However, I'm only talking about iPhones here, although I'm sure that it can also be used with various Android devices such as the "Samsung Galaxy S something".

With regard to the iPhone models, compatibility with the following models can be assured: 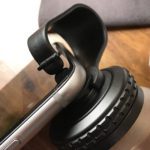 The assembly of the Aukey clip-on lens on the iPhone 6 is very easy. The lens is automatically centered by the camera knob. 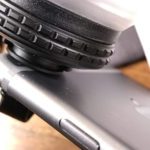 Here you can see how the ring of the Aukey lens slips over the camera knob of the iPhone. 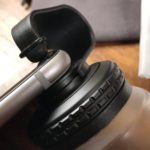 On the side of the display, a rubber clamp presses the lens onto the iPhone.

Using the Aukey clip-on lens with the iPhone 7 Plus

I still used the Aukey macro lens on my iPhone 7 Plus. You only need a little practice to center the lens neatly over the lens of the iPhone. In practice, this works very well if you look into the Aukey lens from above, because then you can see the lens of the iPhone and see whether you have attached it correctly. If in doubt, you can also tell from the camera image whether the ring is still in the way somewhere.

Also important: if you get close to the subject and switch to the 2x mode of the iPhone 7 Plus, the iPhone sometimes switches to the other internal lens due to a lack of light. But since this is covered by the Aukey's ring, the picture suddenly turns black. In practice, switching to 1x and then back to 2x helps. So I was able to take most of the macro photos with the 2x lens and the additional 10x macro lens from Aukey. 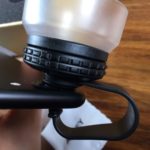 With a little practice you can get the Aukey 10x macro mounted on the iPhone 7 Plus. 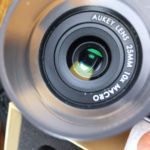 Here you can see in the middle of the lens that the lens of the iPhone 7 Plus is not centered correctly. 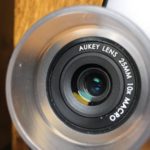 If it looks like this in the Aukey lens, then the macro lens is properly centered.

I specifically mention the use with the iPhone 7 Plus here, as the well-known Olloclip lens system is not yet available for the iPhone 7/7 Plus. So if you want to take macro shots with your iPhone 7 (Plus) and are looking for a clip-on lens, here is an inexpensive alternative that is already available in stores.

Image quality and processing of the Aukey clip-on lenses

I think the processing of the lens is very good. I don't know whether the compensation of the lenses actually makes a difference. But it definitely looks chic. ;-)

Thanks to the clip-on mechanism, the Aukey lens also holds very well (except on the iPhone 7 Plus, where it can easily slip). As mentioned above, the iPhone 7 Plus offers the option of using the built-in lens with 2x magnification in conjunction with the Aukey macro lens. This then offers an enormous magnification (20x) that you would otherwise never be able to achieve with a smartphone and that allows impressive macro shots.

Personally, I find the supplied sleeve less practical. On my iPhone 7 Plus, it ensures that the photos have a dark edge (a kind of vignetting), which I find less attractive. 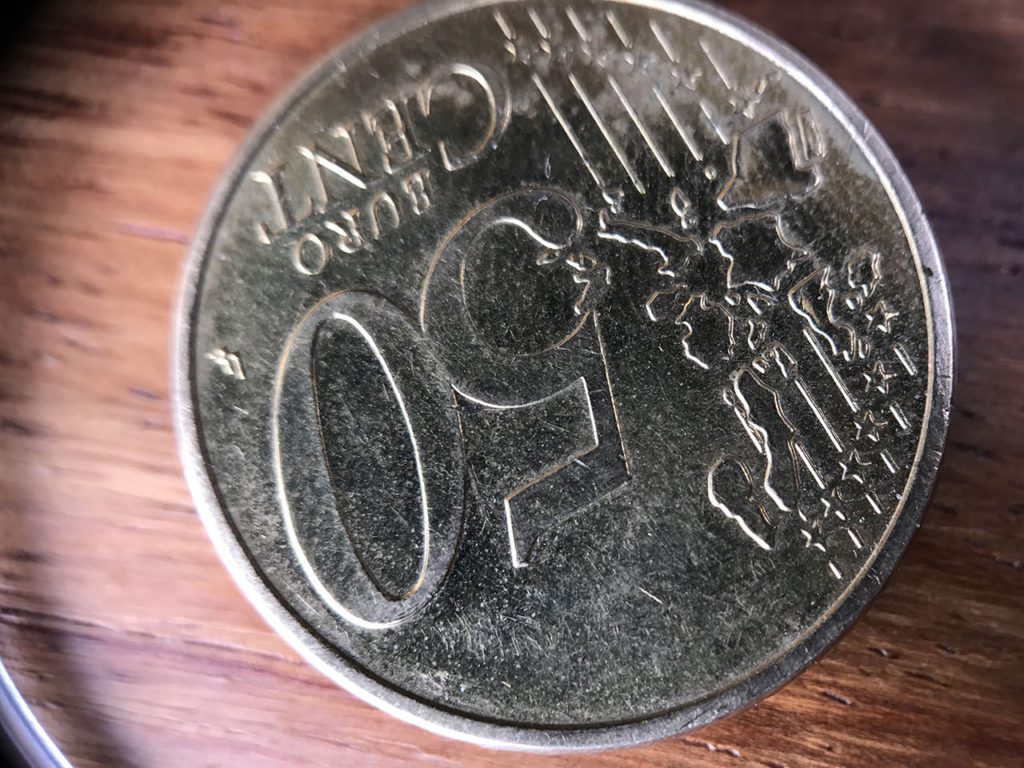 In this photo of a 50 cent coin you can clearly see the edge that is created by the sleeve of the lens. For this reason I prefer to leave them out ...

In terms of image quality, the Aukey lens is better than I expected. Professional photographers will probably clap their hands over their heads when I use the word "quality" here, but don't forget that you're looking at a clip-on lens that costs less than 20 euros. The photos I can take with it are definitely worth it to me.

For you guys I've also put together a small gallery below with photos that I took with the Aukey iPhone lens. The photos are not "pimped up" afterwards in Lightroom or Photoshop, but have only been calculated smaller. The first photos I took were made with Aukey's microfiber cloth as a motif. I would like to show them here in large format (also in original resolution!) So that you can see what the high-resolution photos look like. In the pictures I have noted which equipment was used for the respective photo. 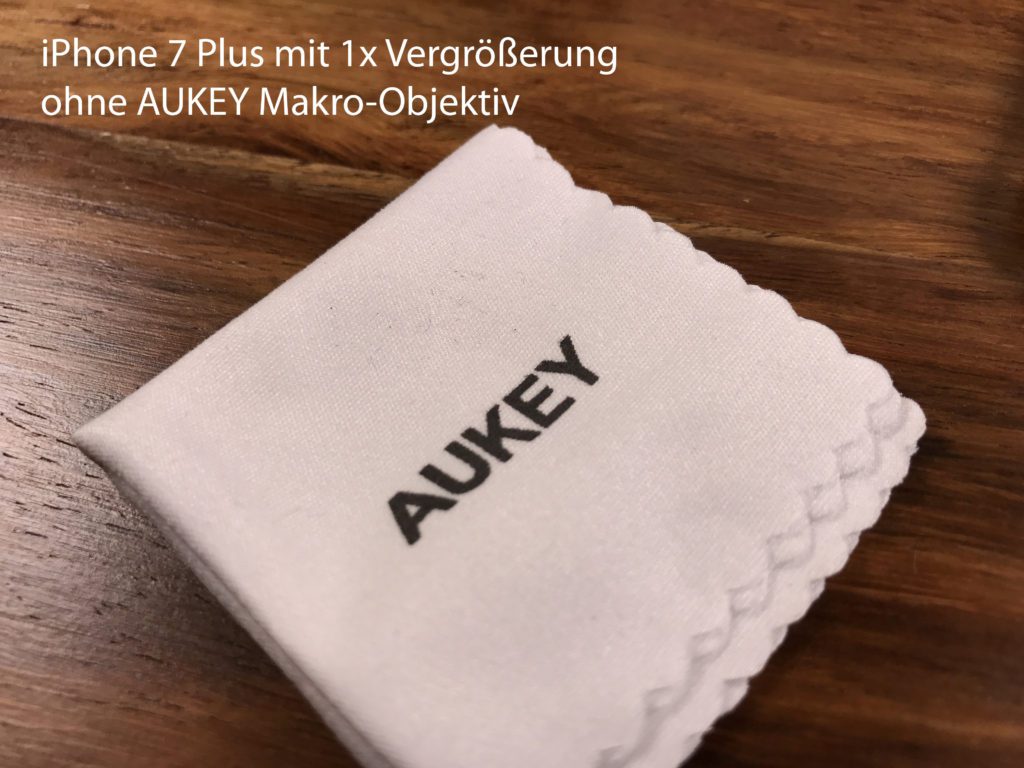 This picture was taken with the 2x mode of the iPhone 7 Plus - without an additional lens. 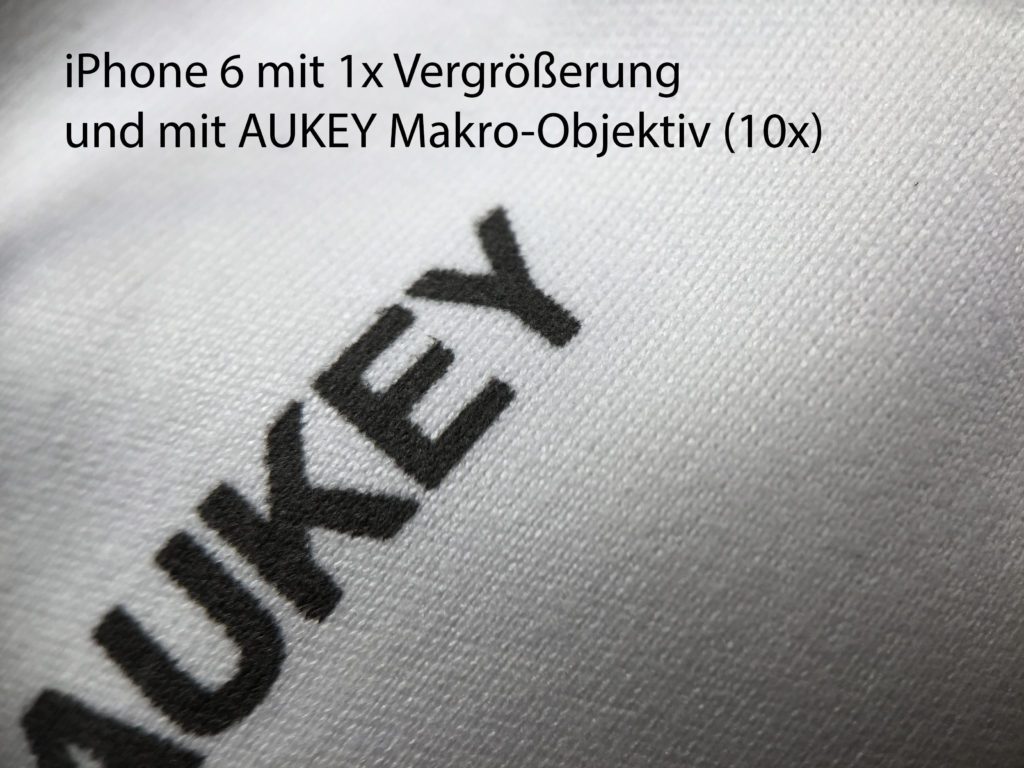 Here the cloth was photographed with the iPhone 6 and the Aukey macro lens (10x). 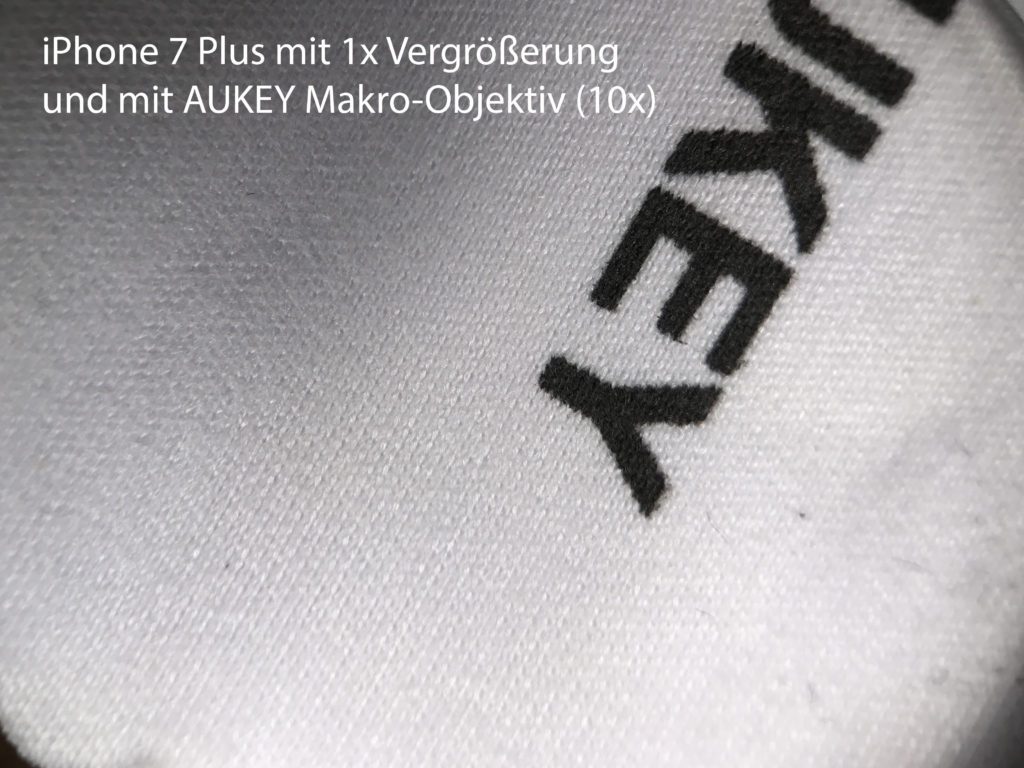 This photo was taken with the iPhone 7 Plus with 1x magnification and the Aukey macro. 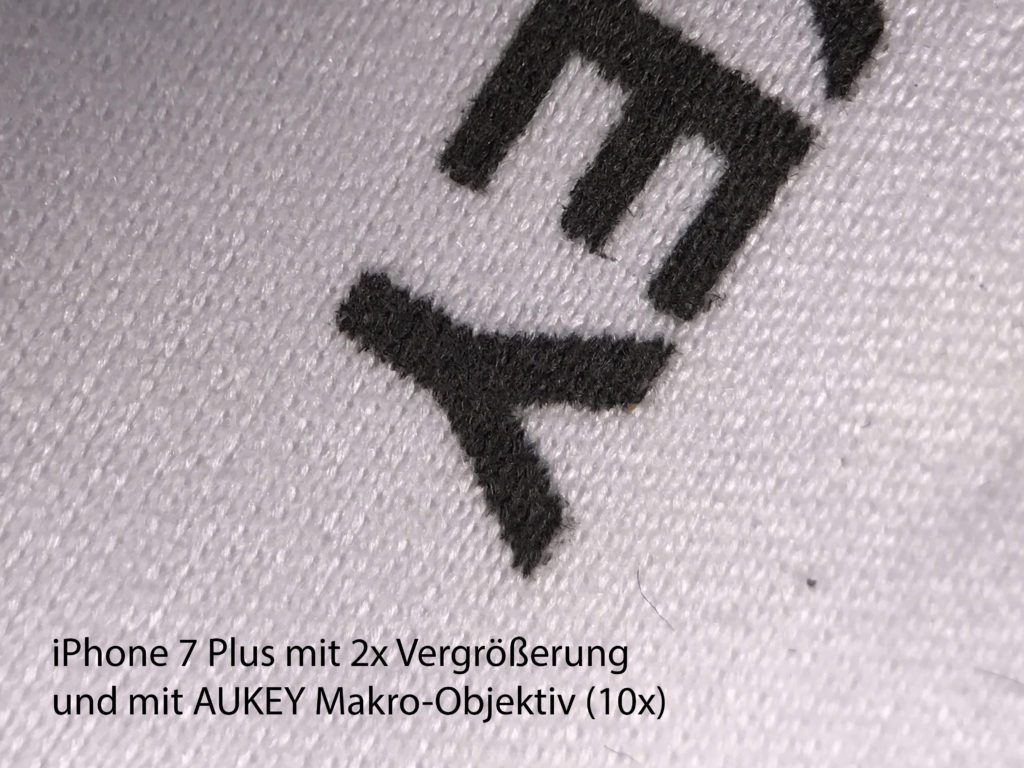 Maximum magnification: made with the iPhone 7 Plus with 2x mode and the Aukey 10x macro lens.

To be honest, I was wondering whether to wait for the Olloclip lens, which will also be released for the iPhone 7 shortly. The fact that this should cost almost 100 euros, however, has led me to test this Aukey lens as an alternative.

I think I'll also buy the Olloclip for a test when the time comes, but in my opinion the image quality can't be so immensely better that more than 4 times the price could be justified. 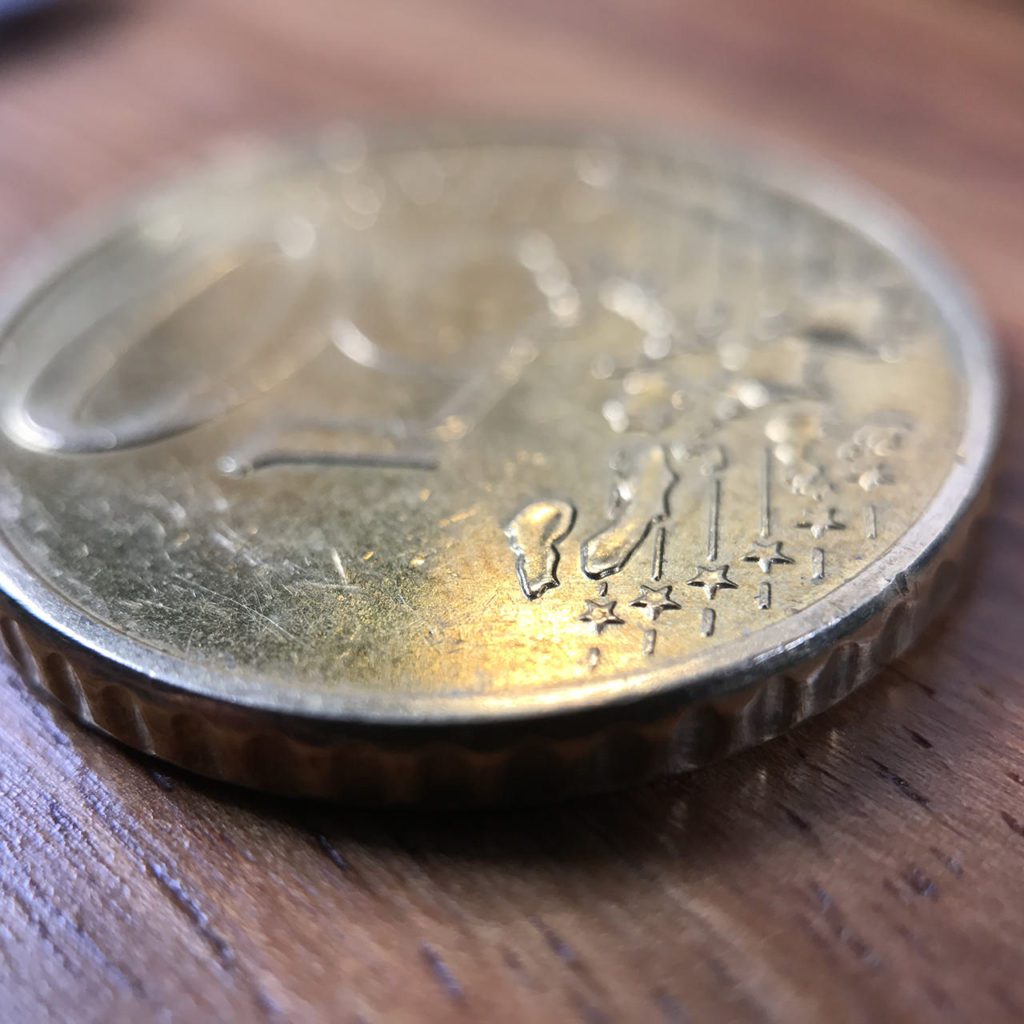 This macro photo of the coin clearly shows how little depth of field the image has. Of course, oblique shots are particularly affected by this. A common problem with macro photography that occurs with all clip-on lenses.

If you are looking for a macro option for your iPhone, I can recommend the Aukey iPhone lens with a clear conscience. Immobile or very slow subjects can be photographed very well with it. The lack of depth of field is generally a problem with macro lenses. This can usually only be solved with a real camera, a small aperture and a long exposure time. But since I like to take photos on walks, this cumbersome solution is out of the question for me anyway.

For me, the Aukey clip-on lens is perfect. The supplied transport bag might be a bit bigger so that everything fits in. In practice, however, I will probably use a small plastic box for safe transport anyway.

If you want to take a look at the lens for iPhone macro photography, you will find it quite inexpensive on Amazon:

Here I have a few more macro photos for you that I took with the Aukey. Nothing special, but I think they show what is possible with the iPhone 7 Plus and the Aukey macro. I'll take nice photos soon - in another post. This one is really long enough. ;-) 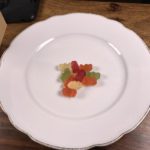 My photo subject: a couple of gummy bears. 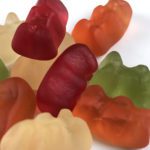 This macro photo can be created with the iPhone 6 and iPhone 7 without magnification or an extra lens.

You can get a little closer with the internal 2x enlargement of the iPhone 7 Plus. 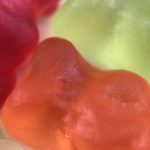 You can only take such macro shots with the internal 2x magnification of the iPhone 7 Plus and the Aukey macro lens. 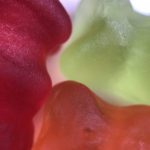 Macro photo: Up close and personal with gummy bears. 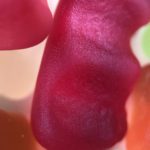 All photos are not post-processed (only scaled). 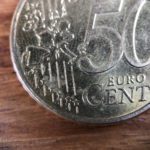 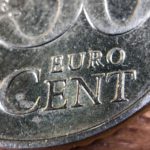 The lettering Euro-Cent in detail. 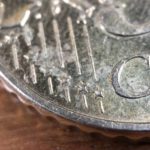 Here you can see the stars on the edge of the 50 cent coin.