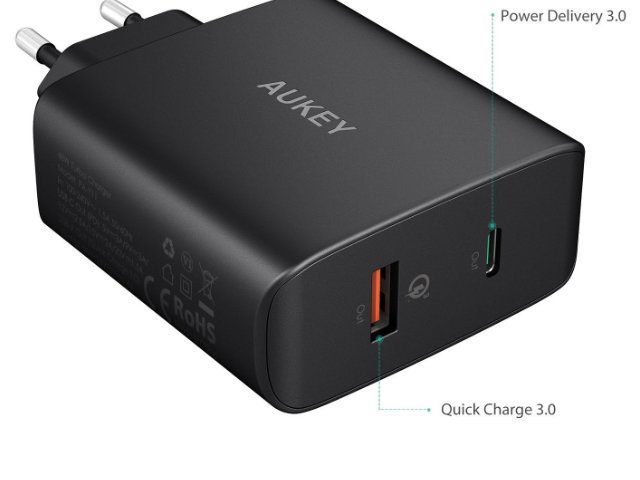 With the PA-Y11, the manufacturer AUKEY has launched a charger for Euro and Schuko sockets that is equipped with Quick Charge 3.0 via USB-A and Power Delivery 3.0 via USB-C. 18W output is possible via the type A connection and up to 30W is supplied via the type C output. For example, you can use the Apple iPhone, iPad and MacBook that Nintendo Switch as well as Android devices such as the Google Pixel or Samsung Galaxy smartphones can be charged faster - thanks to the two connections at the same time.

If you use different devices, for example the iPhone 8, 8 Plus or X or the Nintendo Switch game console, each with the option of faster charging via USB-C Power Delivery, then this charger is very useful. In addition, there is the simultaneous use for devices that do quick charging via the USB-A port or via Quick Charge. Whether you want to charge Apple devices such as iPhone, iPad, MacBook or other laptops as well as Android smartphones like the Samsung Galaxy Note 8 or Google Pixel, it doesn't matter with this charger - you are always ideally equipped.

On the Amazon product page you will find further technical data and comparable devices (from AUKEY, Auckly and Inateck) as well as several 5-star customer reviews as well as customer questions and answers. The various positive reviews show that the purchase is worthwhile: