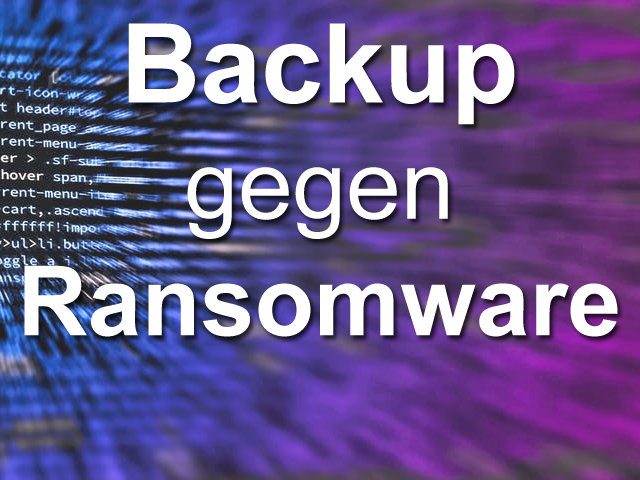 Anyone who regularly makes a data backup, i.e. who outsources their files and folders as a backup copy, is more protected from ransomware and its influences than others. Here I would like to briefly show you how the topics Data Backup and Protection against ransomware belong together, and thus give you an incentive to regularly backup your storage. Because, according to experts, ransomware is probably growing, even if you no longer hear so much about major attacks. There is a corresponding infographic at the end of this entry.

Let's start at the beginning: ransomware is malware that can get onto the Windows PC or Apple Mac from various sources, but mostly via email. The older the system, the firewall and/or the protection against malware, the more vulnerable the system is. Unlike viruses, which destroy data or data carriers, or Trojans, which read passwords, ransomware encrypts or blocks the data and data carriers so that the user can no longer access them.

Ransomware ensures that you cannot use the operating system or the files on your hard drive. Instead (in most cases) when you start your PC or Mac you get a message that is equivalent to a ransom note: Often a certain amount of money in bitcoins is required so that the hackers can decrypt your hard drive again and release your data.

Worth reading: Do I need antivirus software on the Mac or MacBook?

If you want to be very specific, there are two types of ransomware: One encoded all the data of the hard drive and the other blocked the system so that nothing works anymore. Incidentally, the term “ransomware” comes from the combination of Ransom and Malware emerge. Malware stands for malware, and ransomware means something like ransom (as a noun) or ransom (as a verb).

But regardless of whether the software is encrypted or blocked: if you don't have a backup, you have little choice but to pay the ransom if you want to get your data promptly. Antivirus companies and other software developers against malware are always working on solutions and decryption programs for popular cases - but that can take time.

This is how the backup helps: Make a backup copy against blackmail

It is best to back up the whole system daily. Whether with iCloud, Google Drive, Dropbox or other solutions: it's easiest with the cloud. In addition, the backup can be carried out fully automatically. External hard drives, NAS systems and the like are only safe if they are only connected for backup. If they are on the computer when the ransomware strikes, they can also be encrypted / blocked.

The entire system can of course take up a lot of space and the transfer to an external hard drive or to the cloud can therefore take some time. So if you have data that does not change (pictures, music, documents), then just copy them manually once. You then save the rest of the data, i.e. data that is changed or created every day, in a cloud folder or drag it there at the end of the day.

Recommended reading: The best hard drives for the NAS or other RAID system

The provider for online backups Backblaze (here is a blog entry about BackBlaze from 2013) has published an extensive infographic on ransomware and the dangers it poses. I have included this graphic for you - source: backblaze.com.