A so-called battery socket as a mobile power supply with a connection for power plugs that draw 220V or 230V, as well as with USB connections, USB-C ports and the like, there are now some. I would like to compare four of these power banks, which can be described as mobile power sockets, and show a heavy-duty box as a fifth model, which brings either 12V or 230V; and that for devices with up to 300W. So forget the generator and learn more about the generator alternative for mobile power supply;)

A battery socket with 220V or 230V is the right thing for vacation, camping, travel and power outages. In 2017, in addition to the power bank with USB-C, the battery pack with a power plug port was part of the mobile equipment to charge / operate MacBook, drone, DSLR and more.

In the following I would like to compare different socket devices for use with 220 volt or 230 volt devices. I will go into the capacities, connectors and the like. In addition to my explanations, note the descriptions and reviews on the Amazon product pages. Unfortunately I cannot (yet) provide you with a test of this or that battery socket; However, I hope that I have done enough research so that you can draw a purchase recommendation from the statements here even without a test.

These mobile sockets are compared:

Batteries for Euro plugs, USB-A and USB-C in comparison

Without further ado, I would now like to introduce four battery models for external use. In addition to the power, the number of volts and the hours that are required for charging, I tried to find other important data and information. This table should therefore provide information about the most important technical data of the high-performance power bank models:

Conclusion on the mobile sockets

Such an external battery with which you can not only charge your smartphone, tablet, action cam, flashlight and Co., but also power your laptop, Apple MacBook, household appliances, this and that device from the kitchen, office, garden and camping area has something. In addition, the power bank models recharge quite quickly. The plug slots of the RAVPower models can even be used with Schuko plugs - possible problem: the attachment so that the plug does not wobble or fall out. By the way: the delivery package also includes a power supply / charger, USB cable and the like for each battery pack. More information can be found on the respective Amazon page.

The company BEAUDENS has a very interesting new model (Beaudens B3801-DE) that can deliver 300 watts of power continuously and up to 600 watts for short periods. Through the USB-C ports, which also support QC and USB PD support, even large Android and Apple tablets can be loaded quickly. With 60 watts of output power, the USB C ports provide enough power to charge even large MacBook Pro models. 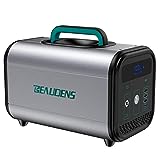 Socket for on the go: IVT Power Station PS-300

The heavy duty box with the label IVT Power Station PS-300 I have removed sockets from the comparison of battery packs above and would like to list them individually. Although this battery “only” has a capacity of 20 Ah for on the go, it supplies 230V power for devices with up to 300 watts. In addition to the connection for the mains plug, there is also a 12V connection with a maximum of 10A for technology that runs at 12V. The device is comparatively large and with 11kg not exactly something for the handbag or hiking luggage. (Also note the dimensions and weight of the battery packs mentioned above!)

IVT Power Station PS-300
Battery socket for mains connection with 230V and car connection with 12V. Capacity of 20Ah and enough power for technology with up to 300W. Ideal for the garden, as a reserve for power failures, when traveling by car, mobile home or van, etc. Simply operate and charge electronic devices while on the move. External battery for many areas of application. Individual connections can be activated separately.
Buy it at Amazon Price includes VAT, plus shipping costs (updated: 28.05.2022 at 09: 00 clock)

Whether Android smartphone or tablet, iPhone, iPod or iPad, laptop, MacBook Pro 2017, Printer, scanner, television, vacuum cleaner, mixer, desk lamp, drill or other devices - mobile batteries like the ones shown ensure that you can charge or operate them to a certain extent. In addition, the various connections (network and USB) can be used at the same time - for example to operate the iPhone and the MacBook (Pro) simultaneously.

The batteries are not only useful as a power bank for smartphones etc. and as mobile sockets for business trips or vacations, but also in the garden or in the case of one Power failure. Whether 5 volts, 12 volts, 220 volts or 230 volts; There are many possible uses, including DSLR batteries, drones, etc. And to anticipate critical comments: yes, the wattage is also important. But I think that those who are looking for a battery socket are already familiar with it and know how to assess the products shown for their areas of application;)

Your questions and answers on the topic

Does the technical equipment in 2017 also include the "battery socket" as a mobile electricity supplier or do you think that such a device should only be stored as a replacement for the blackout? Can you report your own test or point out a problem with this or that power bank? Feel free to leave your opinion and your experiences with this type of article as a comment! Do you still have any questions? Then leave a comment too and I'll try to find an answer for you.