After initial concerns, the Nintendo Switch was able to establish itself as a hybrid console and is now the favorite of old and new Nintendo fans in 2018. If you want to transport the Nintendo Switch safely to play on the go or with friends, you will definitely need a special transport bag. The different models offer some advantages and disadvantages - even the original from Nintendo has some negative points. On the other hand, the Nintendo Switch bag, which I would like to introduce to you in this post, does everything right.

A lot of great games have come out for the Nintendo Switch over the past year. At E3 2018, more game titles were also published for the current and coming year. In advance, there was also information about the "Let's Go, Pokémon!" Games, which will certainly promote the use of the console's handheld mode. The currently free game "Pokémon Quest", available in the Nintendo Switch eShop, also uses the touch display and is therefore ideal for on the go. For this reason and because of other games that will appear in 2018 and in the following years, a bag for the Switch is definitely a necessary accessory. 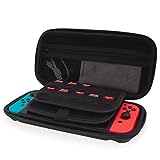 Transport bag for handheld, Joy-Cons, games, etc.
This Nintendo Switch bag offers plenty of space for the console, 20 games, cables, a power bank and other accessories. Recesses for the shoulder buttons at the bottom ensure a secure location for the Joy-Cons. There is enough space at the top for the analog sticks.
15,99 EUR
Buy it at Amazon Price includes VAT, plus shipping costs (updated: 13.01.2022 at 19: 48 clock)

2 Reviews
Transport bag with 9H film for the display
In the set for a few euros more, there is not only the Nintendo Switch bag, which also comes with an attachment so that the console cannot fall out of the open case, but also a 9H armored film for the display.
22,99 EUR
Buy it at Amazon Price includes VAT, plus shipping costs (updated: 13.01.2022 at 19: 48 clock)

The Nintendo Switch bag that you order here at Amazon offers recesses for the shoulder buttons of the Joy-Con controller so that the handheld lies straight. In addition, the cover offers enough space at the top so that the left and right analog sticks cannot be moved or damaged. A Velcro strap is used to fix the switch and the game magazine on top can also be attached so that the display is protected. There are a total of two middle parts for ten games each, which results in storage space for a total of 20 games. You can also carry cables, a large power bank and more in a zippered storage space in the upper part of the Nintendo Switch case.

You can also buy the same Nintendo Switch cover with attachment, space for games from Mario to Zelda to Skyrim and Arms as well as an inside pocket for other accessories as a set with a matching screen protector. You can find the selection of the two order options on this product page. The Nintendo Switch bag is also a great gift for all Nintendo fans and those who want to become one. In addition, you can safely send your children, boyfriends or girlfriends outside to play;) Thanks to the shipping from Germany, the bag is also suitable as a last-minute souvenir for those who already have everything else ...

The Nintendo Switch case offers plenty of space and yet a secure hold for consoles, Joy Con controllers, cables and up to 20 games. You can also buy them as a set with a screen protector.

Nintendo Switch as a blog topic

Due to the various safety precautions and recesses, the accessory pocket inside and the space for up to 20 games, the above-mentioned Nintendo Switch Case is great for gaming on the go. With the protective film, the display is also safe. Incidentally, I was allowed to look at a model directly at the local dealer and can therefore promise you a valuable item that is offered by gamers for gamers! You can find more about the current Nintendo console here in the blog: